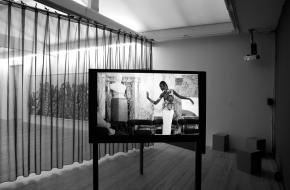 The work La Javanaise (2012) that Wendelien van Oldenborgh made for the exhibition 'Hollandaise' in SMBA, is currently on show in the group exhibition 'Waves vs. Particles' in Berlin. La Javanaise was filmed in the Royal Tropical Institute and explores the inextricable ties between colonialism and globalization, authenticity, imagination and performance, in the context of Dutch Wax and its origins.

'Waves vs. Particles' is part of 'Forum Expanded', the section of the Berlinale that expands the cinematographic landscape from a critical perspective. Wendelien’s work will be exhibited from the 7th until the 17th of February 2013, in the Silent Green Kulturquartier, the former Wedding Crematory. On February 17th there will be an opportunity to meet the artists.