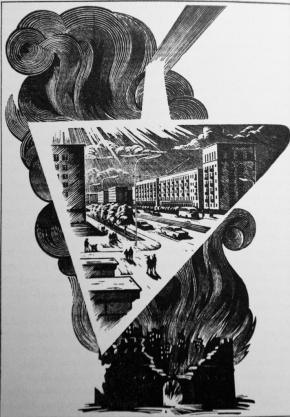 In the context of the exhibition Border Theories, the historian and Russia expert Dr. Bert Hoppe will give a lecture about the ‘virtual history’ of Kaliningrad and the politics of reconstruction. In this lecture he will give an outlook on the relation between politics and urban planning under Soviet administration between 1945 and 1970.

All European cities are dominated by their own distinctive narratives, a certain way of interpreting their past and present. In the case of Königsberg/Kaliningrad there have been two such narratives in the decades following the Second World War - a German one and a new Soviet one - each of which claimed to be the unique "true" story. Whereas the German point of view almost completely neglected the existence of present-day Kaliningrad, the Soviets similarly disregarded the pre-war past of Königsberg, or at least tried to do so.

The case of Kaliningrad is particularly interesting because the Soviet interpretation of the city's past had a deep impact on the cityscape; it influenced plans for the restructuring of the severely damaged city after the war. The core of this project was not only the establishment of a modern Soviet city but also the simultaneous creation of a "virtual history" architecturally. Unfortunately, this resulted first of all in the destruction of many pre-war architectural monuments and landmarks that were to be replaced by new Soviet buildings. These planned landmarks, however, were never realized or completed due to the chronic lack of resources in Kaliningrad. Nevertheless, an attentive observer who knows how to read the city as a "text" will be able to decipher the rare and in most cases forgotten fragments of the original plans to create a "virtual history" for Soviet Kaliningrad.

Bert Hoppe (1970, Gevelsberg, Germany) is editor for nonfiction at Rowohlt-Berlin. He studied at the Humboldt and Technical Universities in Berlin as well as at the Viadrina University in Frankfurt/Oder. Hoppe did his Ph.D. at the Humboldt University on relations of the KPD to Moscow under Stalin. He worked for many years for the Institute of Contemporary History Munich-Berlin, and occasionally writes articles for the Süddeutsche Zeitung, the Berliner Zeitung and the Neue Zürcher Zeitung. He has published several books including A History of Russia and On the Ruins of Konigsberg: Kaliningrad 1946-1970.