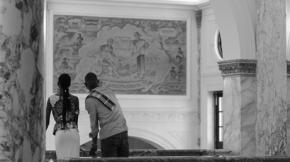 It is with great pride that SMBA announces the exhibition 'Hollandaise, a journey into an iconic fabric' in RAW Material Company, Dakar. The exhibition was on show at SMBA from 3 November 2012 until 6 January 2013. The background of the exhibition 'Hollandaise' is the long-standing economic relations between the Netherlands and the African continent. The title refers to the colorful printed fabrics that are exported from the Netherlands to Africa, and therefore popularly known as Hollandaise or Dutch Wax. It was Dutch textile enterprises such as Vlisco which developed commercial applications for Javanese batik in the 19th century, and found their largest market in West Africa. Today the brightly colored fabric is regarded as typically African. But in fact it is the result of complex globalization processes that right down to this day exhibit colonial features.

Koyo Kouoh is the curator of Hollandaise, which was commissioned by SMBA in the framework of 'Project 1975'.

RAW Material Company is a center for art, knowledge and society established in Dakar since 2008. They will put the exhibition 'Hollandaise' on show from 10 April until 1 June 2013. During the opening days several workshops and master classes will be held with artists Willem de Rooij, Billie Zangewa and Wendelien van Oldenborgh. The programme continues in May with lectures by the artist Abdoulaye Konate and Françoise Vergès.

In collaboration with the network of independent art centers in Africa, the exhibition travels to Nubuke Foundation in Accra, Ghana in July 2013, as well as to Doual’art in Douala, Cameroon in September 2013.