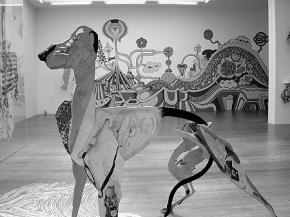 As the old saying goes, “All good things must come to an end.” True to its title, Entropic Meltdown (Happy Sadness) does not appear to linger on the black-and-white values of things said to be good. In fact, it seems to concentrate right from the start on propelling to a speedy end the flawed systems of social and political relationships that abound in the contemporary post-global atmosphere, highlighting the evacuated residue of a world filled with irrationalities. 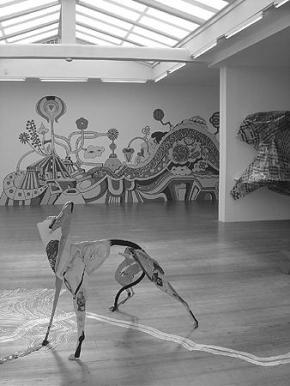 Entropic Meltdown has arisen from the convergence of the work of three artists: Elena Beelaerts, Jovi Schnell, and Fritz Welch. It will travel to three venues in different geographic locations, in each of which one of the artists will serve as host. It will take on-and drop off-different themes and forms as it moves from one venue to the next; the host artist is charged with guiding the exhibition’s title and themes. Beelaerts, a resident of Amsterdam, is the first to host the exhibition, which opens at the Stedelijk Museum Bureau Amsterdam. By joining the three artists’ sometimes cheerfully insidious artistic forms, the exhibition speaks to the seemingly inevitable and steady deterioration of systems and societies. To these ends, the collaboratively associated art incorporates the concepts of micro and macro views and a unique interpretation of the concept of dubbing as an important component of the work process. Interestingly, the art created within this scheme both reinforces the exhibition’s general thesis of entropy and ultimately serves to question it through the subversive presentation of playful contradictions and disturbing innovations.

This perception of the crosscurrents within the exhibition's conceptual streams is compellingly monumentalized by a gigantic, floating, colorless, undulating amoeba by Elena Beelaerts (Self-Portrait as an Amoeba, 2004), which unflinchingly and amusingly inverts the conventions of scientific experimentation by injecting live mice into an artificially generated single-cell structure. In this deliberately startling work, Beelaerts tries to provoke viewers into flooding their systems with adrenaline, the fight-or-flight hormone, helping to subtly erode their defenses by inducing physical and emotional stress at the site. Curious or adventurous viewers are invited to move under the amoeba and place their heads partway into the invaginations on the underside of the form, allowing them to look inside the structure while being enveloped by it. In a symbolic protein match, direct contact between the viewers’ heads and the membrane is possible without breaking any surface; the vantage point offers a partial peek into Beelaerts’s identification with and psychological metamorphosis into another life form in this self-portrait, through which she reminds viewers of just how much the systems of a single-celled creature have in common with more complex cellular structures, such as human beings [1]. This broad idea can be transposed onto the exhibition to show the commonalities between distinctly different artists.

The artists build upon life’s incongruities by bringing into play an array of found images and time-honored subjects that seem to have become uniform in their value, and then unleashing them through eccentric interpretations of their form and meaning. The subjects include games, domestication, organisms, machines, theme parks, and advertisements, which are shown from points of view that are malleable, such as microscopic vision, cross sections, transparency, and reflection, and in diverse materials, such as plastic, string, acetate, and paint. From organic, cultural, and industrial commonalities, the artists create large and concentrated works that signal-on an arbitrary scale-the degradation of messages that could be imagined as stating, “Humanely end the pain and vulnerability of those suffering,” but which are transmitted as a blast of silence that ricochets off the ceiling, drops to the floor, and moves up the wall to form a lyrical pattern of symbols in a vocabulary of familiar images [2]. The artists’ assembled works transform the art sphere into the site of the meltdown, with the “happy sadness” expressed as the ambivalence left in its wake. Past and present visual and material cultural are microwaved in this installation of visceral, symbolic visual poetry.

Akin to Beelaerts’s exploration of scale, the concepts of “macro” and “micro” appear in Schnell’s large colorful wall work (Eyeshot Valley of the Micromacro Maiden, 2004), which joins many different images, including organic and mechanical forms, into subjective relationships. Schnell has likened her clearly delineated but intricate images to a kind of cultural cross section of the brain. She elucidates, “I'm interested in creating an elementary type of form that can express a body of complex information born out of compounded metaphors that stem from interdisciplinary associations.” In addition to this explanation she maintains that in essence her work seeks a kind of poetry, whose primary expression tugs at the mysteriousness of life. Eyeshot Valley of the Micromacro Maiden is populated with images of conveyor-beltlike paths that evoke an amusement-park ride, circulating in, out, and around a base of architectural forms and a back-leaning stylized human profile with parted lips. It also contains what Schnell describes as a “knot motif,” which is comprised of pooling closed systems, hidden string dimensions, clouds, and treetops. By organizing and collaging cross-sected views or visions together, Schnell’s expression seeks to form a greater organism or ‘systemic landscape.’ [3] To be sure, each artist's work includes many multifaceted, oppositional elements that support the notion that magnification or condensation of details could expand one’s understanding of the whole by reflecting, encapsulating, detracting from, or contradicting it, thus offering new insight into the artist’s work and the exhibition’s themes.

In addition, the artworks’ close proximity, reflective surfaces, and overlapping structures offer a material and imagistic dialogue. To this end, Beelaerts sees her own and the other artists’ work intermixing through a concept articulated by Jorge Luis Borges in the opening statement of his text entitled “On Dubbing”: “The art of combination is not infinite in its possibilities, though those possibilities are apt to be frightening.”[4] Beelaerts explains, “It is this part of the essay that sparked my associations with Borges and our project, interpreting most freely, I must admit, . . . On the one hand, in my art I have an enormous amount of freedom to stack and layer, dissect, amputate, and so on, existing imagery, as well as my own. On the other hand, I have a strict frame of reference of which the inner logic becomes clearer and more exacting as the body of work develops.” [5] This view of the work process can be seen in all of the artists’ work through their use of pictures from their personal world of images; each artist maintains an archive of collected images to be used directly or indirectly in his or her work. These include a seemingly endless catalogue of imagery, including representations from religion, science, art, popular culture, anthropology, advertising, and-perhaps most importantly in the context of this exhibition-physiology. In a circular pattern of distribution, Schnell’s work has found its way into the world of illustrations from which she might make her selections. A wall work entitled Physical Plant (2001), which she made for the Williams College Museum of Art in Williamstown, MA, will be reproduced as a cover illustration for a book related to a conference held the same year, entitled Experimental Cultures: Configurations of Life Sciences, Art, and Technology (1830-1950) and held at the Max Planck Institute for the History of Science, Berlin [6]. Welch frequently uses his collection of his own finished artwork as material from which to make new work by reconfiguring it.

Welch’s response to the exhibition’s theme is less about science and more concerned with life force, or the essence of life. Rather than the generalized decay in all aspects of life connoted by Entropic Meltdown, he asserts the importance of “the undulating vibration of all-consuming death and its poetic equivalent in the realm of art,” citing life with the knowledge of death within it as of greater importance. [7] Using blues music as an analogy, he says, “Despite its essential quality of negativity, there is an overall positive aspect.” [8] In fact, playing or singing the blues is considered to be its own antidote: it’s actually a life-affirming form of music. Welch relates to "dubbing" as a mode of replication, or, in the case of music, a method of recycling and mutating: “Dub takes basic structures and turns them around and in on themselves within the repetition of solid beats.” [9] His approach to art also has a musical basis: it’s improvisational. Once at the site, he will deliver a focused response to the interior architecture of the SMBA. However, Welch offers specific material references and elements. Diverging from Schnell’s oblique visual reference to String Theory, but approaching her conception of a knot motif, Welch will use black string emanating from a wall drawing of an “imagined mind warp”-not as in the literal image of a brain, but perhaps as a reference to using drawing as a mental focusing device, like a mandala-twisted in the air by invisible lines of mono-filament, as in the string game cat's cradle. [10] The monofilament will be tied to the black string and made taut to extend the string’s line, with some creating both angular, zigzag patterns and others wavy forms. String figures such as a pentagram have appeared in past string installations; however, it’s uncertain what will emerge and possibly change in the space of Entropic Meltdown. Also on view will be over one hundred flexible 8-by-10-inch black-and-white acetate transparencies of 1970s television advertising storyboards that have been taped together to form a drape. To augment and meld the work into its surroundings, mirrors will be a prominent feature. These surfaces will offer catoptrical images of all the artists’ work, allowing it to visually merge, shift, and bleed as the viewer moves through the site.

As a new saying might go, “All ambiguous things must be in flux.” True to inversions of logic and gleeful forms of subversion, the artists’ explorations lead to the discovery of positive, playful, and frightening things. By sorting through the reanimated archive of the Entropic Meltdown, viewers will discover a galleryscape of unusual forms through which they might experience a kind of happy sadness-not unlike the blues.

1. In addition to the Self-Portrait as an Amoeba, Beelaerts is contributing two self-portraits as a dog, one of which depicts the dog’s stomach aggressively emerging from its body and attempting to digest external objects.

2. The exhibition will be complemented by a performance at the gallery opening by psi, a “Brooklyn, New York-based electro-acoustic trio made up of Jaime Fennelly (electronics), Chris Forsyth (guitar), and Fritz Welch (drums, cymbals, and found objects). Cathartic, hermetic, meditative noise that slowly evolves into nothing.” (From Statement for promotional use, 2003.) A relationship can be found between the band’s work and the macro-micro theme: it can be incredibly loud or very quiet, textural and visceral, or thin and ethereal.