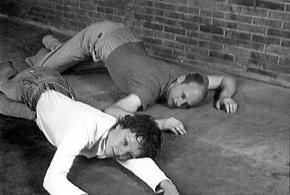 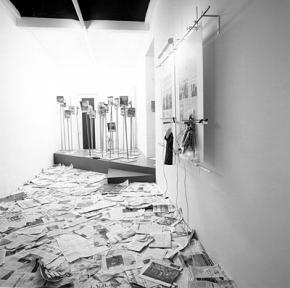 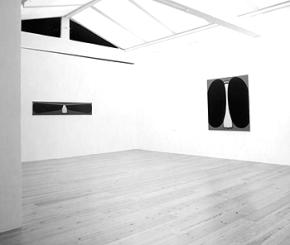 From November 21 through December 13, in cooperation with the Amsterdams Fonds voor de Kunst, Bureau Amsterdam will present work by the Sandberg Prize winners of the past three years. The Sandberg Prize (the Amsterdam Art Prize for the Visual Arts category) is awarded annually. From 1996 to 1998, the winners of the Sandberg Prize were, respectively, Ritsaert ten Cate (for his installation "There was nothing between us but a considerable distance"), Aernout Mik (for his video film "Lick" and the S-16 film on video, "Fluff") and Jan Roeland (for the survey exhibition of his oeuvre in De Beyerd in Breda and the Rijksmuseum Twenthe in Enschede). Together with the artists, it was agreed that Bureau Amsterdam would not show the prize-winning works, which had previously been seen, but would choose more recent work.

"Theatrical" is a word frequently employed when it comes to the installations of Ritsaert ten Cate (b. 1938), and this is no surprise to those who are knowledgeable about the artist's background. Ten Cate is the man behind the legendary theatre centre/gallery Mickery, a production house for experimental theatre and an important site for performance art in the 1970s. For Ten Cate, who a number of years ago started the interdisciplinary theatre workshop DasArts, creating an installation is not that far removed from creating theatre. "They both arise out of the same feeling. You want to get something across to the spectator, to say something, and the choice of the form in which you do that is not so important. What is most important is that it is about something, that what you want to say has roots in the society."*

In many of his works Ten Cate reveals himself as an engaged artist, someone who allows the spectator to pause in the presence of important (though often not very hopeful) events in recent history and reflect on what he or she will do in response to them. The installation for which he received the 1996 Sandberg Prize, "There was nothing between us but a considerable distance (Anna Enquist)," is comprised of a number of wall units in which the artist combines personal recollections (personal photographs, drawings) with explicit references to catastrophe and human suffering (highly familiar and poignant news images from newspapers and other media). Moreover, a number of mirrors are included in the installation, so that, in addition to being given a look at the world in general and into the artist's personal world, the viewer also gets to see him or herself: Ten Cate seems to be asking, What are you going to do about the images you see here? Like "Between us...", the installation to be shown in Bureau Amsterdam, comprised largely of components from Ten Cate's installation "Crush Time" (seen earlier this year in Brussels), contains both personal documents and familiar images. Poles nearly the height of a man, like those which function as signs of remembrance in Iranian cemeteries, plastered with news photos, are one of the striking components. Another work shows a never realized proposal for a Peace Palace in Den Haag, on which Ten Cate has mounted the Declaration of the Rights of Man, and in so doing, reacting to the other works, pronounces his astonishment at all human good intentions and what has come of them.

The prize-winning works of Aernout Mik (b. 1962), "Lick" and "Fluff," were seen for the first time as parts of the ID exhibition at the Van Abbe Museum. Furthermore, "Lick" was included in the presentation Mik created last year (together with Willem Oorebeek) for the Dutch pavilion at the Venice Biennial. A sculptural use of the human body in space and physical experiences are central to "Lick" and "Fluff," respectively a video and a 16mm film on video. "Lick" shows us a passageway in which two girls sit on the wet floor; a blue liquid comes running out of an opening in their breast. Opposite them a man kneels, upright, on a downward moving lift platform, with his face turned toward the girls. Because of the absence of corresponding emotions (the girls gaze straight ahead, neutral and impassive, as if there was nothing at all unusual), the absurdity of the situation takes on an uneasy character. In "Fluff" (camera, Marjoleine Boonstra) Mik also combines static bodies in a space - a storage facility for furniture - with organic materials. This time the figures are pelted with lumps of an unidentifiable matter. Once again the equanimity of the figures, as through they have become resigned to the unavoidable senselessness of the situation, creates a feeling of uneasiness. There is no escape possible from Mik's micro-worlds ruled by irrationality: accepting the situation is the only option.

The installation at Bureau Amsterdam is called "Float," and consists of a video projection and a sculpture with an extra. The video shows how an expressionless man and woman, lying on their stomachs in an indefinable space (grey floor, brick walls), are tossed up and down in an unremitting rhythm, as though they lay in a cart rolling over a bumpy road at high speed. For the viewer, the repeated and fundamentally physically unpleasant experience gradually gives way to acceptance of the situation, through which the up and down movements even begin to assume a calming quality. The sculpture in the same space in Bureau Amsterdam, into which an extra is introduced, continues the horizontal structure of the video, but is opposite in character: apparently tranquil, but rumbling in the underbelly.

This year the Sandberg Prize was awarded on the basis of a whole oeuvre. The survey exhibition of the work of painter Jan Roeland (b. 1935) consisted of about 40 works which he has done since 1967. The exhibition demonstrated how strikingly consistent his oeuvre really is, and how deeply the artist has always held fast to his own views on painting. Averse to fashion and ignoring the many obituaries that painting has outlived during his career, Roeland has never made concessions in his search for the ideal balance among the flat surface, spatiality and colour. Objects are unvaryingly the subjects of his paintings. Everyday things such as envelopes, lighters, tables, plants and pairs of glasses are subjected to close scrutiny by Roeland, and reduced to their most elementary forms. In many cases this reduction leads to a level of near abstraction, in which the object as such is still just barely recognizable. The relation between the flat surface of the painting and the illusion of plasticity plays a crucial role in this.

In every painting, Roeland is in search of the balance between flatness and depth, wherein a sophisticated use of colour functions as the referee. It is precisely through the colours, chosen and applied with the maximum of care, that the tables and plants, reduced by the artist to a number of flat areas of colour, receive the suggestion of dimensionality from which these works derive their sensory and vital quality. For Roeland, every new painting is again the beginning of a difficult search for the right balance, and, because it is impossible to predict in advance what will happen on the canvas, each painting is likewise once again an endless wrestling with forms and experimentation with colour. This complicated process of painting is also the foundation for the “Nose and Glasses” series being presented by the painter in Bureau Amsterdam. In these recent works in which a nose and sunglasses (varying from dark and ominous through happy and soulful) are always to be seen, for the first time in his career Roeland is painting a part of the human face: the nose. "But," says the artist, "isn't the nose actually still only an object? And I don't paint faces. That's much too difficult."*

*Citations in the text come from the author's conversations with the artists, October, 1998.