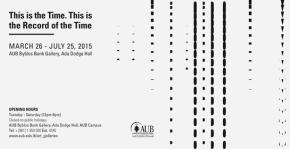 As part of the Global Collaborations, AUB Art Galleries in Beirut will present the exhibition This is the Time. This is the Record of Time. This show was previously to be seen at Stedelijk Museum Bureau Amsterdam. At the occasion of the opening on Thursday 26 March several performances take place. This is followed by the symposium ‘Thinking about Time’ that is organized by the American University of Beirut. Later in the year AUB Press will publish an extensive catalogue of the project that was initiated under the flag of the Stedelijk’s long-term project Global Collaborations.

This is the Time. This is the Record of the Time is part of the Stedelijk Museum’s Global Collaborations program in partnership with AUB Art Galleries. The exhibition and its newly commissioned works premiered at Stedelijk Museum Bureau Amsterdam in September 2014.