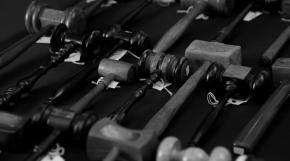 Diego Tonus’s Processing Authorities is a work in progress that concentrates on gavels as symbolic instruments used to install and process authority. The starting point for the work is a unique and obscure collection of gavels that belongs to the International Institute of Social History (IISH) in Amsterdam. These hammers were used in assemblies of Dutch emancipatory movements in the 19th and 20th centuries for calling the meeting to order or marking the conclusion of collective decisions. The Institute collected the hammers over the years when they became redundant as the organizations dissolved. This is the first time that all of the 52 hammers have been presented to the public outside the IISH.

The exhibition in Stedelijk Museum Bureau Amsterdam is conceived as the first exhibition of Processing Authorities and presents enigmatic visual and performative aspects of these objects within a specifically designed environment, incorporating the original gavels and the film Soundtracks for Revolutions, which includes recordings of their sound. Every hammer blow evokes a memory of the past, while simultaneously connecting to all other forms of decision-making processes that have been formalized with the rather arbitrary ritual of hitting a hammer on a wooden block. Tonus’s research is centred on the micro histories and the shifting symbolic meanings of these hammers. Processing Authorities reflects on the Western cultural decision-making processes, the visual representation of authority and the potential for transforming these hammers into objects of power.

Along with Processing Authorities Tonus will show his film Speculative Speeches (Workers of the World - Relax) in SMBA. In this film the artist exercises his voice, acting with different tonalities, rhythms, colours and modalities, investigating and practising its potential to comprehend ways of affecting and influencing an audience in different contexts such as public speeches, presentations or conferences, to name but a few. The film is thus another example of Tonus’s focus on the power to achieve particular goals, as extrapolated from political, cultural and social processes.

A Festival of Choices

Stedelijk Museum Bureau Amsterdam welcomes Diego Tonus during ‘A Festival of Choices’, organized by the Sandberg Institute of Fine Arts.

‘A Festival of Choices’ emphasizes the relationships and choices made by Sandberg’s attendees among the diverse Institutions and organizations in the cultural landscape of Amsterdam. For other presentations and their locations, please consult the website choices.nl/"target="_blank">www.festivalofchoices.nl.

‘Diego Tonus – Processing Authorities’ is made possible by the support of the International Institute of Social History - Amsterdam (IISH).

For more information on the artist: