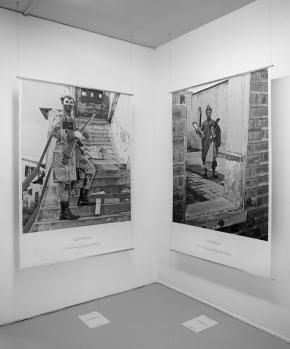 All lectures/interviews start at 5 p.m.

Preceded by a guided tour through the exhibition at 4 p.m.

Stedelijk Museum Bureau Amsterdam presents a program of events during the exhibition ‘Time, Trade & Travel’. Guided tours by the SMBA staff, a lecture and two artist talks on three Sunday afternoons will highlight various backgrounds of the exhibition and individual works in the show.

Cultural anthropologist Rhoda Woets will give a lecture on the category of Contemporary Ghanaian Art since its inception in colonial times. Artists who live and work in Africa and the Diaspora are finally receiving recognition and interest in a world of growing global connectivity. However, so far, little has been written on the formation of modern art in specific African countries. Woets argues that art in Ghana became global long before the ‘global turn’ became a concept for Western art historians in the 1990s. Modern art in Ghana emerged in an artistic field in which primitivism and Pan-Africanism played a formative role. While a particular understanding of what Ghanaian art and culture is still informs current artistic practices, old frames have become increasingly contested or mobilized in new manners. Woets will discuss the work of several artists in relation to contestations over the definition of Contemporary Ghanaian Art. She furthermore reveals the richness, ingenuity and diversity of contemporary art practiced in Ghana.

The interview will be preceded by a tour of the exhibition’ Time, Trade & Travel’ by Joram Kraaijeveld, curatorial assistant at SMBA.

In a public interview Zdjelar will shed light on her video My lifetime (Malaika), which she shot during her residency in Ghana this year. The short film directs attention to the paradoxical status of the Ghanaian national symphony orchestra. Although the Western musical tradition has never been fully integrated in Ghana, the Ghanaian state has sponsored this cultural institution since Ghana became independent under the leadership of Kwame Nkrumah in 1957. The national symphony orchestra was one of the new cultural structures that were introduced by the government to stimulate national consciousness and mark the transition from colonial rule to independence. Since it is part of the political and cultural legacy of the founder, Nkrumah, the national orchestra today has become an institution that cannot be abolished without provoking political turmoil. But at the same time it is too insignificant in present-day Ghana to be supported financially, so the orchestra’s existence simply remains ambiguous. Zdjelar will be interviewed about how her film sketches a complicated state of affairs in which grand ideas and mechanisms of the nation-state take root in and affect individuals. In My lifetime (Malaika) and in her other works Zdjelar often uses the camera to closely observe bodies that are speaking, acting, or performing. By this focus on the performing subject in her artistic research Zdjelar demonstrates that the ability to speak a language or to use an instrument is loaded with social and cultural codifications. In the interview her interest in this normalization of language and its effects on human bodies will also be discussed.

The lecture will be preceded by a tour of the exhibition Time, Trade & Travel by Kerstin Winking, assistant curator at SMBA.

On the very last day of ‘Time, Trade & Travel’ Zachary Formwalt will be interviewed by art critic Sven Lütticken. The interview will focus on Formwalt’s starting points for his research in Ghana and the film that he made as a result of that, A Projective Geometry. This work delves into the history of a railway in present-day Ghana that was built in the late 19th century by Britain to transport gold from the inland mines. In this video work he investigates the particular geographical vision and phenomenological experience that come with this means of transport that is a result and instrument of the British colonial enterprise. By capturing and visualizing a material outcome of economic and social process, Formwalt offers the possibility of understanding how the construction of the railway was driven by capital accumulation. As in his other works, he brings his visual method of research, film and photography into a remarkable relation with economic phenomena and processes, his subject of research. In a way his films carry out the metaphors that are used to imagine and understand economic processes. In the interview Formwalt will clarify this relationship between the expressions in the economic sphere and the method and research of his films. In addition, the Marxist backdrop of Formwalt’s works will be reviewed by Lütticken, as well as his interest in the difficulty of visualizing economic processes that are considered to be abstract or immaterial.

The interview will be preceded by a tour of the exhibition ‘Time, Trade & Travel’ by Jelle Bouwhuis, head of SMBA.

Rhoda Woets is a cultural anthropologist who in 2011 defended her PhD research entitled “What is this?” Framing Ghanaian art from the colonial encounter to the present in 2011. Her current post-doctoral research at the VU University examines the circulation and appropriation of mass-produced and hand-painted Jesus pictures in urban Ghana. One of her recent publications is "Formally or informally trained: the clash about defining contemporary African art in ArtFocus (2010, No. 3).

Katarina Zdjelar is based in Rotterdam, where she studied at the Piet Zwart Institute from 2004 to 2006. In 2010 and 2011 she was a resident at the Rijksakademie in Amsterdam. Her work has been exhibited internationally in solo exhibitions in venues such as TENT, Rotterdam (2009), the Centre d’Art Contemporain, Fribourg (2010), and in the Serbian Pavilion at the 53rd Venice Biennial she had the exhibition ‘But if you take my voice, what will be left to me?’ (2009).

Maria Hlavajova is since 2000 artistic director of BAK, basis voor actuele kunst, Utrecht. In 2011 Hlavajova organized the project of the Roma Pavilion in the framework of the 54th Venice Biennale entitled ´Call the Witness´. In 2007 she curated a three-part project ´Citizens and Subjects´ for the Dutch Pavilion at the 52nd Venice Biennale. Previously she was a faculty member at the Center for Curatorial Studies, Bard College, New York (1998–2002), co-curator of Manifesta 3, Ljubljana (2000), and director of the Soros Center for Contemporary Arts in Bratislava (1994–1999).

Zachary Formwalt studied at the School of the Art Institute of Chicago and at Northwestern University in Evanston, Illinois. In 2008 and 2009 he was a resident at the Rijksakademie in Amsterdam. His solo exhibitions include ‘The Form of Practical Memory’ at Kunsthalle Basel (2009), ‘Future Park II – Reproduction Direct from Nature’ in Casco, Utrecht (2010) and ‘Zachary Formwalt’ at ar/ge kunst Galerie Museum in Bolzano (2011).

Sven Lütticken is an art historian at Vrije Universiteit in Amsterdam. He contributes regularly to catalogues and art magazines such as Artforum, New Left Review, Afterimage, and Texte zur Kunst. He is the author of Secret Publicity: Essays on Contemporary Art’ and ‘Idols of the Market. Lütticken was also the curator of the exhibitions ‘Life, Once More: Forms of Reenactment in Contemporary Art’ at Witte de With in Rotterdam in 2005 and ‘The Art of Iconoclasm’ in BAK, Utrecht in 2009.

Time, Trade & Travelhas been made possible in part by contributions from the Mondrian Fund, the Amsterdam Fund for the Arts, HIVOS and SNS REAAL Fund.