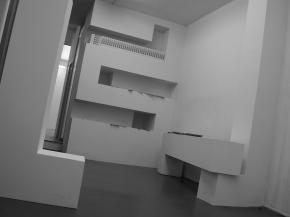 Together with the opening of the exhibition ´Capricious´, a new reading space was presented in the entrance hall of Stedelijk Museum Bureau Amsterdam. This ‘Space To Keep Books or STKB (and magazines)’ is designed and executed by Dutch artist Joris Brouwers.

In his strive for clarity he realized a shape that melds together with the already existing space. Making use of horizontal L-shaped recesses a place is created where books, magazines and other material can be presented. The recesses reappear in the hall as counter shapes where they can be used as seating. Together the whole forms an intriguing combination of bookshelf’s, spatial intervention and installation.

‘Space To Keep Books or STKB (and magazines)’ is on show permanently at the Stedelijk Museum Bureau Amsterdam.

Joris Brouwers (1972) is visual artist and has had (group)expositions at W139, de Veemvloer and De Appel. His video works were shown in Paradiso and Filmhuis Arnhem. During the period 2001/04 he was also editor in chief of the magazine HTV de Ijsberg. 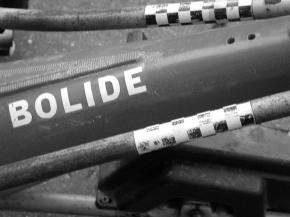