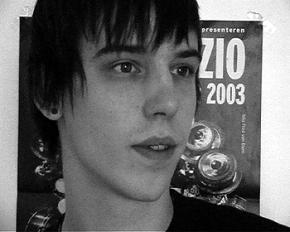 They are sitting on a faded flowered couch, plump and lazy, gazing vacantly forward - waiting for the first simmering that will make them move fast, filled with restrained rage which will swap, with a short and professional response after the tumult, into a conceited feeling of satisfaction. He is changing channels on the television and she is leaning her head on his shoulder, while the warmth of the fireplace is almost burning their skins. They are wearing winter clothes, but it looks like the clothes are meant to protect them from the great heat, and not from the very thin rain and the confused wind outside. After a while she bends down and picks up a newspaper from the floor. The couch makes a small squeak of wood which makes him prick up his ears in an almost visible way, like a trained hunting dog. Each rustle that rises from leafing through the newspaper diverts their attention from the raging wind and the provisional sounds of bicycle wheels, which move in high vissssshhhhh...es on the crooked pavement. The reddish light of the fire is lashing out at the cold and firm light of the television screen, and drowns in their glazed identified eyes. The voice of a child crying out to his friends is heard from the street and before he finishes his sentence the couple is not sitting on the couch anymore. She bends down fast, sends her hand under the couch and draws out a heavy doubled barrel rifle. He is attached to the wall next to the window and looks outside.The street looks like a romantic postcard shrouded in a mid-winter greyish kitsch. 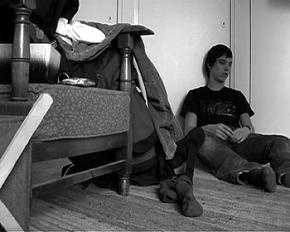 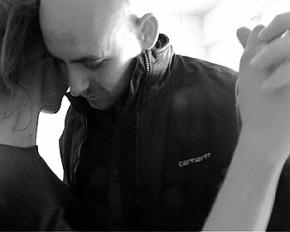 Three kids standing barefoot on a blue-grey background, gazing at him with open lips and filthy faces, innocent out of childhood compulsion.He swings his arm straight out of the window that turns out to be glassless, and professionally shoots a small knife that knocks down the middle kid like a cardboard target in a shooting range. The girl and the boy next to him turn their heads to the their friend, and before they manage to examine their friend's body a shooting sound fills the boat with smoke and gunpowder, and the girl is knocked down on the rough and wet sidewalk like a burned bagel. The third child that looks like Macaulay Culkin starts running, moving his hands and his legs, trying not to think about how limited the speed of his movement is. In the moment he is swearing not to think about it anymore, a gigantic hand grabs him, lifting him into the air and bouncing his heart into the depth of despair. He opens the boat door with the kid lying on his shoulder like a dead deer. He is putting the kid on the couch and the kid is looking at them scared, his bright blue pupils are open and wide and his heart beats are echoes between the boat walls. "Are you going to do whatever we will tell you to do?" asks the hunter. The kid is too stressed to hear anything, looks dumbfounded at the two barrels that the woman is holding, nods his head, and after a second says "yes," with a dry mouth. "Even if I'll tell you to kill all of your family and rape your mother while my dog is watching?" she asks, surprised, and the kid says "yes," which comes to his mouth from the most primitive cells of his brain.She is looking unsatisfied at her husband and says, "I'm not looking for 'yes men'." She is shaking her head, disappointed, and shoots the chest and stomach of the kid.The echoes of the shooting are still clashing on the walls of the boat and soaking into the blood splatters, as she leans tiredly or relieved on the rifle, and lays her head on the concave between the shoulder and head of her beloved like two pieces of wood in a bonfire that has just been lit...

She is sitting on the window sill and her bright hair is shining softly in sunny rays of light. Her diary is open in her hand and she is looking at the numbers - tempting and seductive - seven digits that might bring salvation.She is looking at the green grass, the colorful swing, and her little nephews larking about under the sun. A heavy sigh comes out of her mouth. Her breasts rise up and down sadly with her breaths and she bites her lip, as if this will stop the tears. Then she is waving her bright hair to the side and shifting from her forehead a thin lock of hair that the swing of her nape could not remove. She picks up the cordless phone that lies on the window sill too, next to a satin bra and a black pen, the same pen that wrote these fateful numbers an hour ago. "Hallo." His voice is deep and thick and long, penetrating through the receiver and trembling her soul."Hi," she answers. After a short while she is whispering into the receiver, asking, hesitating, laughing politely, and hanging up the phone. She is looking at her room, at the bed, at the smooth sheets, at the begonia plant that is lying on the chest of drawers, at her stained underwear, and her heart opens suddenly in immense love for the world like a sunflower in a burned, golden field. She draws her power from the sun. Two hours later the sound of a knock on a door is heard. She's crying out, not too loud, "it's open," and he is coming in, muscular and tanned, smelling of lubricating oil and Ck1. He sits on the bed next to her and they talk softly to each other. His eyes lay on her breasts and her eyes smile at him, leaping in-between his thighs and returning to smile warmly first to his mouth and then back to his eyes.."Do you love me?" she asks. He is holding her hand between his two hands and she feels the sweat of his hands between her open fingers. "Of course I love you, I've loved you for a long long time, I know this love is real," he says, and she is shaking her head and her hair moves from side to side like electric waves."It's not the first time I'm hearing it," she say in tense and pleasant expectation. "Maybe you can prove your love to me," she says, and moves her bottom left and right in childish impatience. His eyes return to her breasts, then to her lips and her chiseled chin. "I can fuck you in various positions, lick your cunt until you'll fake an orgasm and then go to sleep next to my wife."She does not move, her eyes are still hanging onto him, and one can almost see her hot blood flooding her face, each part of her body. "Get the hell out of here!" she shouts in an honest, raging voice, her blood flushing her brain, and she opens with an animalistic, uncontrolled series of curses. "You womanizer, you prick, you son of a bitch."When her consciousness returns, her right hand is still pointing to the door and her head turns to the bed, to the soft, deep concave that her beloved left on the satin purple cushions. She is breathing in deeply, letting her breath tremble inside her lungs, then she is turning her head and looking at the window, at the green grass, the colorful swing, and her frozen, painful face challenges the boiling sun.

CONSTANT, cliché of my clinches, cell of my corpuscles. My penitent, my penis. Con - stant: more then a tip of the tongue taking a trip of two steps down the palate to tap and knock, at three, on the teeth. Con. Stant. He was just Con, plain Con, in the evening, standing six feet two in one sock. He was corny in slacks. He was in constant fights at college. He was Constantin on the dotted line. But in my arms he was always Constant.When I open my mouth I say it, when I close it I say it again. Constant. All my mouth is calling your name. Did he love me? He did. Indeed he did. In point of fact, he might have loved me more in the morning, drawing his fingers through my hair. Oh where? In a princedom by the mall. Oh why? According to no rule but the movement of a falling leaf. Can you blame the leaf for falling? Can you blame the ground for lying on its back? Oh when? About as many years before he left as my shoes age that winter. You can always count on a film noir for a pretentious prose style. Ladies and gentlemen, the first documentation is what the witnesses, impatient, clever, smart-coated witnesses, lost interest in. Look at this tangle of tongues.