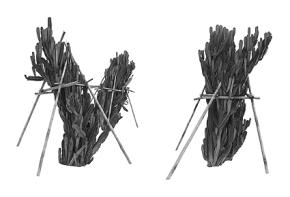 In Stedelijk Museum Bureau Amsterdam, Roma Pas will be presenting works created last year during a residency in the city of Xiamen in southern China. Unlike many other Western artists who visit China, returning with semi-documentary work, Pas underlines the impossibility of capturing her experiences there in an unambiguous or epitomizing image. Just as social interactions in the Far East are governed by what, to us, are almost impenetrable codes, all attempts at (photographic) representation are subject to abstruse systems of coding and decoding. With her exhibition of photos, drawings, videos and Flash animations in Bureau Amsterdam Pas shuns the urge to tell ‘something’ about China. The core of the works is the paradox that despite or perhaps because of the fact that the world is now within everyone’s reach through television, the Internet and cheap flights, our position as observer has only become more fragmentary. 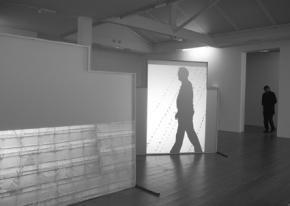 This work, spanning a variety of media and formats, is defined by its partial masking of the subject. None of the pieces purely concentrate on the object represented. In projections of Flash animations, images of Chinese flats in scaffolding unfold bit by bit, only to be replaced immediately by a new image. In a video piece we are shown only a segment of a Chinese neon sign flickering on and off. Life-sized photos of cacti, digitally excised from their environment, are printed in iridescent hues on woolly fabric. In a number of self portraits, the artist's head is abruptly cropped or partly obscured by shadows and grids. Separately, the works may sometimes elicit tags like tourist, symbolic, documentary, aesthetic or existential, but seen as a totality they are ambiguous, and question the dimension to which the ‘here’ of the title actually belongs.

This exhibition marks a new phase in Pas’ oeuvre, a departure from previous work that was often fashion related. In Backrow, Pas photographed parading models at jam-packed fashion shows from the back of the venue. Glimpses of mannequins appear now and then between the silhouettes of the audience. Pas also photographed the visitors on the front row – who transpire to be as fashionable and media-genic as the catwalk models (Frontrow). The work exposes the fashion world as a carefully constructed media and image machine – a gratifying subject for Pas’ investigation of representations: how we relate to a reality increasingly mediated by the image. Determining this work’s position proves problematic. Once printed in glossy magazines the photo series merges almost seamlessly with other fashion reportages, in which the actual garments also play a secondary role these days.

In the context of gallery or museum the photos of Pas almost automatically acquire a critical tone, set off against a transitory fashion world geared to unbridled consumption.

The dilemma of how to ‘visualise’ something now, in a time in which everything has become visual, is at the heart of both this early work and ‘Here, in China’.

Roma Pas (b. 1973) graduated from the Gerrit Rietveld Academy in Amsterdam in 1998 and has exhibited in Casco, Utrecht (Snowscapes, 2004); ASC Art Space, London (Sundream 8, 2004) and in the Vleeshal in Middelburg (Higher Truth 71, 2002). Her photographic work has also been published in numerous magazines.

‘Here, in China’ was made possible by the Netherlands Foundation for Visual Arts, Design and Architecture.