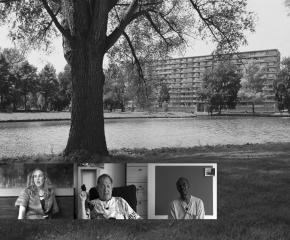 BijlmAIR: Soap Stories Hala Elkoussy is currently resident of BijlmAIR, the artist-in-residence project in the Bijlmer district of Amsterdam run by CBK Zuidoost in collaboration with Stedelijk Museum Bureau Amsterdam. For the working period of four months, Elkoussy proposed to develop a project ?inspired by the format of the British television soap that features unglamorous open-ended narratives, focusing on life in certain geographical locations.

This geographic location is a key feature of the show. The cast is made up of everyday characters and the storylines explore social realist themes with an emphasis on family life, personal relationships, sexual dramas and emotional and moral conflicts. Some comedy elements are thrown in for good measure.?

Elkoussy will work ?together with members of the community as ?an artist working on a script for a soap opera, taking place in the Bijlmer, who is soliciting the public?s contribution regarding events that have marked their personal lives in the area.? Who are the protagonists and what do they go through? What are their concerns, dreams, regrets? How do they relate to the place where they live and to other people within their neighborhood? Who do they consider to be prominent members of their community? What role does their identity play in their interaction with others??


Through a series of interviews and different accounts of events, the cast of fictive characters will gradually take shape, side by side with an array of possible plot lines and locations. Elkoussy: ?My actions are organically dictated by where my encounters lead me. So there is no prescribed end to the process at the outset, not unlike the format of a soap opera where stories run concurrently, intersect, and lead into further developments, but always with the implicit understanding that life will go on!

The development of characters, short stories, perceptions of place, collected physical objects, as well as a diary of the process will be way as the building blocks of a soap opera; continuity over time is an important characteristic of the soap format. The resulting product will give an episodic, non-authoritative, non-conclusive, multiply oral and visual account of the Bijlmer.? This account will be on view from November the 8th in the space of FlatStation, at the same address of the BijlmAIR residency at number 42 in the Florijn apartment building.

Hala Elkoussy (1974, Cairo, lives in the Netherlands) had, among others, a solo-exhibition at SMBA, Peripheral (and other stories) in 2006, that was also part of the exhibition Snap Judgments at Stedelijk Museum CS. More information on BijlmAIR can be found on www.cbkzuidoost.nl