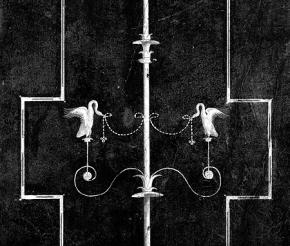 Putting to good use the remarkable experiments in time allowed by his previous films, which presented ways of bringing up to date ‘reduced’ accounts from our collective memory and a suite of dialogues between contemporary phenomena and historic events, Melvin Moti proposes, with The Black Room, a system which, under an apparently simple exterior, is in fact one of his most complex works: a giddy descent in to time, dreams and imagination


The camera slowly pans the length of a Roman wall setting, an image that is practically ‘paralysed’, ‘frozen’. It is about fragmentary views of sacred and idyllic scenery of 'The Black Room', one of three collections of walls from the Villa Agrippa in Boscotrecase (Pompeii) and today partly preserved in the Metropolitan Museum in New York and the Museum of Naples. The pre-eminent position of wall settings in the global architectural programme is unprecedented. The absence of frame, the central position of the ‘floating’ illustrations on the wall, the use of a black and neutral background as an active element of the composition, give the effect of a suspension of shapes in an indefinite and obscure deepness, in an infinite space: this new style, springing up from Pompeii, marks the passage from realistic illusion towards an imaginary and intangible representation of the world, from trompe-l’oeil to magic. By this wavering between natural order and the unreal, this rhythmic game between strangeness and suggestiveness would play about somewhat with the order of vision and dreams.

The sound, from then on, offers our ears an interview with Robert Desnos: as a poet, literary and film critic and the author of a significant essay for radio broadcast, he is one of the catalysts of early surrealism. Since 1919, surrealist experiments have explored diverse mediums: automatic writing, dream transcriptions, verbal and graphical games, speaking under hypnosis. Desnos is one of the principal protagonists of these ‘hypnotic sleep’ sessions (1922-1923), one of the ‘drowned in the open air’ of which Aragon spoke1. The interview with Desnos is set in 1931, when the poet broke off ties with Breton permanently. The text, written by Melvin Moti, consists of an amalgamation of biographical notes and diverse information: both a reconstruction and a product of Moti’s imagination at once, it implies a virtual game based on a relation of similarity to the patterns of reality (in knowing the classic form of the interview), a tension between authenticity and imagination. This intricacy of imagination and fiction is one of the paradigms behind The Black Room

In using this radical dichotomy (image/sound, the very slow tracking on the frescos/the voice of Desnos), Melvin Moti proposes a series of redistributions between the ‘visible and the enunciable’, according to the distinction made by Michel Foucault. By the interplay of fiction and the resort to power of imagination, he establishes a fictional historical stratum. Moti has thus brought about different thresholds of visibility (imagination, magical space, visual and audible space, time and subjectivity, etc.) – a ‘virtual visibility’ which is an “out of sight visibility that dominates all perceptive experiences, and does not summon the view without summoning the other sensory fields, the ear and the touch”2. Bringing to view, rendering visible, is the experiment of the archaeologist or the visionary: “And Desnos continues to see what I cannot see, what I can see only when he chooses to show it to me”. The latent and modular redistribution of Moti’s work would be as follows: the regime of the sayable by the medium of the imaginary interview with Desnos, falling back a posteriori on the surrealist methods; the regime of the visible, summoned by the interview again and the partial image of Pompeiian scenery; the use of a polychronic form (or the visibility of anachronism), by a speculative recourse to an entanglement of memory, the deepness of time, the audible and the visible.

This construction put into play in The Black Room, draws in the first place literally from the cinematic montage of image and sound, thought of as a dialectal scansion. Deleuze, quoting from Foucault: “Also it is not astonishing that the most complete examples of the disjunction seeing-speaking are found in cinema. With Straub, with Syberberg, with Marguerite Duras, the voices fall to one side, like a story that no longer has a sense of place, and the view on the other side, like an emptied place that no longer has a story” (Foucault, p. 71). What is more remote than the image of a decorative painting from the Roman age and the evocation of the poetic experiments of Desnos? However Foucault tells us that no relationship is still a relationship, as it always forms crossroads and alliances – including when the procedure presents the risk of anachronism. The link between the two mixed systems of sight and statement in The Black Room is the filmic rhythm of seeing and speaking. Deleuze noted, regarding Femme du Gange by Duras, the concomitance of two films, “the film of image and the film of voice”. “Between the two, there is perpetually irrational division, however there is a perpetual regrouping upon the irrational division or over the chink” (op.cit., p.72). In the film by Moti, diverse elements put themselves within one another (the marvellous/Desnos’ hypnotic sleep, the magical space of the third Roman style), and render themselves concomitantly visible by one another, despite their apparent distance. “Speaking and seeing in a single movement... phenomenal intertwining”, writes even Foucault, with regard to Roussel4, to whom Desnos pledged boundless admiration. Melvin Moti initiates this ‘single movement’, this intertwining by the anachronic monologue device, then by the overdetermination offered by the dream and imagination. The cinematic form is the ideal operational medium, since the structure offers the deployment of expositions of imagination and dreams, and of time and memory – Desnos knows it well, as he will, on numerous occasions, draw a parallel between dream and cinema.

The hypnotic sleep sessions were described by Simone Breton as an experiment in which “we are living at the same time in the present, the past and the future”5. Desnos recalls magnificently this concretion of different times: “In each fraction of time that we desire to consider between closed eyelids, it is the end of the world and genesis. The world, as it is and in the past, is to us only a record, uniform and flat like a mirror, where our breath makes the frost of a dream appear when we imprint our lives upon it, where the future reflects itself if we stray out of its focus”6. In worshipping historical chronology, Desnos opposes the fluidity of time, its flux: “Time is an agile eagle in a temple”7. The surrealists have used abundantly the intrusion of one age in another, an ‘anachronic heresy’ (Didi-Huberman).

By the weaving of mixed times, as in The Black Room, combined with the freeze-frame, we are plunged headlong, to the point of panic, in to a ‘vortex’ of time where we could recognise the proper order of the structure of dreams and of magic, always ‘anachronic’, always in and out of time – until the voice of Desnos, totally invented, returns to the past like a phantom. By these movements, back and forth through different temporalities, The Black Room presents itself as a gaping mouth of time, a symptom, an ‘absurd movement’ (Deleuze), a Benjaminian whirlpool.

In the Second Manifesto on Surrealism, Breton explains very clearly the surpassing of the classic conception of imagination in the way surrealism suggests: “Everything seems to make us believe that there exists a certain mental vantage-point at which life and death, the real and the imaginary, past and future, the communicable and the incommunicable, and high and low, cease to be perceived as contradictions. Now, search as one may one will never find any other motivating force in the activities of the Surrealists than the hope of finding and fixing this point.”

The expression of desire and the flight of imagination, the logic of post-Freudian dream, the deluge of images, the destitution of rational thought, the total subjection to chance and the marvellous, the absence of control, all figure in the programme of the surrealist project. Desnos, more radical than any other, puts dreamed realities and ordinary events on the same level, and establishes, by language, the condition of perceptible apparition, or his visibility: “Giving an authentic feel to the surreal”, he writes.

By the simultaneous conjunction of three types of equilibrium between imaginary and rational (the Roman age, the surrealist period, the contemporary world to which the film subscribes), Moti, in turn, highlights the the marvellous risk of starting to break down the distinctions between real and imaginary or real and fictional.

Returning to Foucault: in order for there to be an intertwining of the visible and the enunciable, it is necessary that a third element comes to light: an ‘outside thought’ which he identifies in his analysis of the work of Paul Klee, as enigmatic, distant, something which is out of place. It is exactly the role assigned to imagination or magic in Moti’s film, which puts in to place three strategies: it recaptures the dialectal excess that surrealism has itself put in to place (the waking dream, the contamination between the fictional universe and the real universe, the surpassing of the real/unreal dichotomy by the surreal); on the other hand, he turns to the performativity of fiction, which brings a “reduction of ways of speaking and of levels of meaning”8. And in order to restore this ‘outside thought’, he lays down the terms of a complex constellation, a medley of time, magic and the imaginary, or a form of complexity based on sentient. “There are heterogenetic dimensions of being. There are intangible differentiated universes which bring about complexity. A complexity which is not only an overlapping of elements in relation to one another, but also a production of the complexity (centres of subjectiveness so to speak). So there are not three instances Real/Symbolic/Imaginary, but levels of reality stratified in relation to one another (the imaginary, existential territories...)”.

Surrealists are conscious of the highly subversive power of the imagination. Thus Aragon, describing the attitude of Desnos in “A wave of dreams” states: “Those who interrogate this prodigious sleeper have merely to prompt him for outpourings of prophecy, the voice of magic, revelation and Revolution, the voice of the fanatic and the apostle to burst forth”. Desnos published a polemic text entitled Description of next revolt, in which he exalts the absolute revolt of spirit against matter: the imagination is a political act. The power to imagine, Einbildungskraft, is in this way a creative activity in a self-governing subject, and just as much irrigates social issues. He comes back to Castoriadis having defined a ‘previous or radical imagination, like a common root between effective imagination and symbolism”, which is “unceasing and essentially undetermined (social-historical and psychical) creation of figures/forms/images, on the basis of which alone there can ever be a question of ‘something’”. The political, judicial and moral constructions, even reality and rationality are creations of the imagination, which is a social and historic overdetermination, and presents itself as an ever-moving flow, a magma, a perpetual ‘wavering’. If, like Castoriadis, one considers the performative capacity of this radical imagination, it is possible to discern in The Black Room an affirmation of the strength, at times political and poetic, of imagination situated not outside the world but a component of psyche, reality and society. The imagination, as opposed to the utopian idea, thus presents itself, in its constituent materiality, as a positive political and social driving force. It offers us the weapons to wage a potential counter-attack regarding contemporary, ideological depersonalizations, which, at a time when a ‘war of dreams’ is waged upon us, a progressive fictionalisation and virtualisation of the world, takes on a certain consonance.