A medium can be so broad and open that an exhibition may turn out to be incredibly indistinct. Making "Invitation No.75" therefore was one of the biggest challenges I have ever undergone, professionally speaking. The output of this group of young designers, photographers, stylists, fashion designers and artists that was brought together in this exhibition was not constrained by a fixed theoretical frame, but by personal encounters, reactionary and creative decisions that led to the final presentation as you see it. A week before the opening things could still change a 180 degrees: and believe me they did! In this way, possibilities and opportunities were created up to the last moment for adjustments or even outright alterations, similar to the topical moves of fashion labels that tend to change after every season. This makes the show explicitly time based, touching upon even more whimsical topics such as identity and creativity but, at the same time, introducing the risk of loosing focus.

For "Invitation No.75" six artists were approached to make a visual statement about their position within their professional practice and (commodity) culture, as they see it. Using two influential labels, BLESS and Bernhard Willhelm as a starting point, a younger generation of creative individuals was invited to assess their position in their own manner. This group of starting professionals is loosely related to the main labels: they belong to a personal network, or just draw inspiration from them. Every participant was stimulated to collaborate with likeminded colleagues, leading to new collaborations and inputs within the framework of the six statements already outlined, all the while keeping in mind that the final output would be exhibited in a museological space. In this way, all the works except David Sherry's were made especially for the space of Bureau Amsterdam, isolating them from everyday commodity hysteria and focussing the makers' attention on the appearance and relevance of the products they created, almost to give a subject to a discipline that tends to be all image and no interiority.

In using this approach, a new impetus was given to the creative process: "I do believe that, at this point in time, a truly interesting movement is taking place in the creative arts in which much more emphasis is placed on craft. It is a reaction of sorts to the cold and pro-techno approach in the 90's", stipulates Michael Magnan in his questionnaire. This may sound naïve, but it clearly describes the less designed, almost artisan do-it-yourself work young artists and designers are producing. Things don't have to be expensive to make and can be produced without a full team of assistants, seems to be the

All the participants of "Invitation No.75" move freely within different fields of commercial and cultural production at the same time, and affiliate themselves easily to design as well as to art. To use the words of the duo BLESS published in a recent Metropolis M magazine: "All the products must initially make sense to us and enrich our own surroundings. These surroundings tend to change with every production as does the medium that is used. We do not notice the line of separation between the disciplines at such. We don't give much thought to these divisions or how the disciplines are defined. The only reason for a product's existence is that it was once needed and we created it ".

The occasion at hand, "Invitation No. 75", constituted the framework for the interaction of various contributors who, individually, were also provided with the opportunity to point out their own vision in this alternative newsletter, a substitute for the SMBA Newsletter. Short questionnaires have been elaborated, inspired by those printed in glossies like Dazed & Confused, which replace the theoretical background material usually presented in the SMBA Newsletter. The information is personal, time based and intends to satisfy the never-fulfilled need of commodity culture to find the personal backgrounds of artistic statements.

I would like to thank all of them for their collaboration and support. 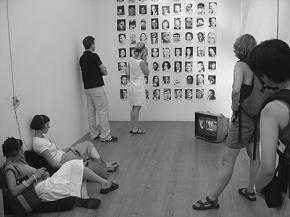 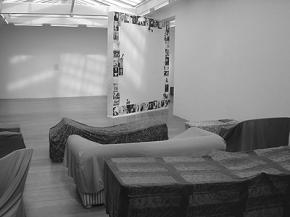 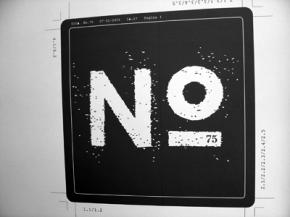 Bernhard Willhelm, Carmen Freudenthal and Elle Verhagen have been collaborating since 2000 on the Lookbooks of Bernhard Willhelm's label. As a team they evolved their own formal discourse, consisting of images showing different kinds of techniques such as collage and found footage. Their participation in this exhibition will be a visual statement around Bernhard Wilhelm's label, using the winter 2004 menswear collection (which was presented last June) as the starting point. Items such as the sense and non-sense of camouflage, army outfits and trash are the main parameters.

Initiated by Ines Kaag and Desirée Heiss, BLESS have focussed on the identity of the fashion world since 1995, in their own words by: "presenting ideal and artistic values of products to the public". Compared to the strong visual appearance of Bernhard Willhelm's creations, in which he samples the signs of commodity culture, translating them into his own visual language, BLESS' way of working is more personalised and transparent, touching upon questions such as: " What does the wearer want in fashion?". Furthermore, by combining different functions of existing almost archetypical designs, a new language is created which redefines their original purpose.

For "Invitation No.75", BLESS faced the challenge of placing a commodity-related product inside a gallery space without making it only representational and esthetical. Their contribution will be in the form of a performance at the opening of the exhibition. The picture series which was originally produced for the exhibition will be published in the Purple magazine of October, expanding the borders of the exhibition into commodity discourse.

What if you are an artist and decide to appropriate an image derived from commodity culture. "Just do it!" could be a self-evident reaction, but in a world where multinationals are gaining more and more control over their images, it's no longer all that simple. This made the initiators of JOFF, Julia and Corriette, (fashion designer, designer and photographer respectively) decide to take matters in their own hands and turn this "problem" to their advantage. With "A Red Skirt!" they claimed copyright for an archetypical piece in the fashion world. Their research that led to their final sequence is summarized and displayed in the exhibition.

JOFF is currently in the process of launching its own label after showing its first collection at the "Festival International de la Mode" in Hyères in the spring of 2002.

Pavel, who originates from Macedonia, is currently working with fashion from a performance point of view. Conventional clothes and accessories are physically re-functioned in order to create a personal narrative. This narrative forms the key position in his work, in which he uses fashion (relating to the body) to stage his fascination for mythical stories in contemporary urban everyday life. For this exhibition, Pavel has created a "one piece collection": a map of personal encounters, anecdotes and desires in which he has taken the participating labels as starting point for an associatively shaped urban epos.

Starting off as a painter originally, but still with the need "...to do something physical" David Sherry, this year's nominee for the Beck's Futures Prize London, began later on to stage his own performances. Showing his video "Stitching" in "Invitation No.75" he makes an intimate moment public; altering his everyday routine with an extreme physical alteration. In his Glasgow home he appropriates an African ritual in an off-hand and ingenious way, leaving the viewer uncertain if it is fictional or not, and putting the event into a different perspective.

As editor of Re-magazine and visual artist, Arnoud Holleman is in various ways closely involved in contemporary culture. His artistic input for "Invitation No.75" is mainly at an editorial level, which led to his invitation of Scott Hug (K-48) and Michael Magnan (DO NOT PROVOKE US), artists he personally admires, to fill his place. Why? Maybe the obvious answer is: "Why not?". "They Rock!" Nevertheless Arnoud's influence is still very much present, as you can see in his own contribution to the exhibition.

Michael and Scott created a graphic representation of their personal friend and "muse", Phiiliip. This design, implemented in the exhibition as a mural, is presented as a fabric proposal (for BLESS or Bernhard). During the installation they will customize their presentation with visuals and objects found in Amsterdam, including reminiscences of their personal network, friends and new encounters. In which also Holleman's own contribution plays a significant role.

Recently graduated from the Rietveld Academy as a designer, Floor Wesseling initiated IXOPUSADA, which publishes a monthly leaflet as an anonymous platform of ideas. Artists, philosophers, designers, etc. are collaborating in a select publication which is all hand printed. IXOPUSADA is invited to make the alternative Newsletter with the intention to customize the traditional SMBA Newsletter for the exhibition without loosing its original identity and importance. The product logo for the overall exhibition was also produced by Floor.