In Aernout Mik's Reversal Room (2001), everything proceeds in doubles. This doubling is not mirror-like: it always produces two separate but parallel realms. These realms might be contiguous or continuous to one another, yet somehow at some point they intersect. We have to decide whether this intersection qualifies as an event, or whether we have to think about it in other terms that the whole structure puts into play. For everything in Reversal Room is a construction-from its double scene to its double seeing. Everything in Reversal Room has been artificially fabricated to guide our attention. Within that fabrication, we are drawn, naturally, to what attracts our look: to what moves; it is a video installation, after all. We substitute what we see for our own activity-other people's behaviour for our own-and so we come to a halt before these moving images. We have already tacitly accepted the conventions that put Mik's work in place-first, its gallery setting, second, the architectural housing for the rear-projection video images that leads us into and contains us within their space. For we take these images to be primary: they are what we are here to view. Furthermore, we expect what happens within them to conform to either one of two standards-to what we know of behaviour "out there," and to what we experience of it through the moving images film and television have conditioned us to. 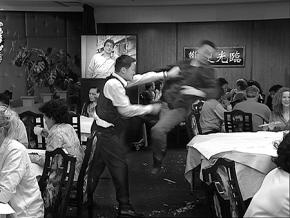 Yet nothing is typical in a Mik video installation. No doubt you are familiar with what happens in a usual Mik video installation. You enter a room and come upon a video scene. Something is askew, the behaviour is off somehow, but you can't seem to place what exactly is wrong about it, partly because the activity seems to impart itself as-almost-normal. Or you witness groups behaving in odd, though really unexceptional, routines whose intentions are not clear. Having neither a start nor a finish, the activity has a pattern but no obvious rational end to it.

While most of Mik's video installations offer us a view on a group's performance, Reversal Room, his most complex work to date, juxtaposes two opposing scenes where some uncommon element interferes. One scene takes place in a Chinese restaurant and the other in a kitchen that obviously is not connected to the restaurant. In the restaurant, two male white patrons separately leave their table, seek out the Asian owner or a waiter amongst the crowded tables and accost them, only to be manhandled and thrown on top of either one of two occupied dining tables. The patrons recover, dust themselves off, retreat to their table, only to recommence their slapstick routine again and again. The other diners pay no attention, not even those inconvenienced by the collapsing table, and the table pops back up by itself and is reset as the dinner resumes. In the kitchen, two groups-uniformed chefs and kitchen help belonging, casually dressed guests trespassing-occupy the same tight space but exist almost in different temporal zones. While the staff bustles, preparing food, the guests dawdle, messing up. Each is oblivious to the other, even though the guests sometimes shadow the staff around the room. While they exist in the same space, their temporal worlds do not seem to intersect.

Within each scene there are two planes of interruption and continuance: fighters and diners, guests and cooks. Something unfamiliar, unconventional or unnatural to each scene, an intrusion, seems to unite both: the fights of the restaurant scene, the guests in the kitchen. But why should we concentrate on the intrusion as if the context is merely background to its event? We note that the absence or exhaustion of motivation in the actions of the restaurant agitators is complementary, not opposite, to the obliviousness of the other diners. The periodic repetition of the fights and the continuity of indifference of the diners are differing realities that intersect in another dimension, which means that the irruption of the fight is no more an event than the continuity of dining is a non-event. In the kitchen, the actions of the two groups parallel one another without interaction, in different tempos. (Actually, the guests' interruption is spatial, while that of the fighters in restaurant is temporal.) Yet we could also say that they exist together, though at opposing ends of the scale between the dynamic and the static or, rather, the entropic.

Naturally, since they are offered together to us, we seek a relation between these two series of images, some sort of narrative connection between their individual stories. Mik frustrates this narrative demand on our part; there is neither a connection between the two (the kitchen is not the back story to the restaurant, and no protagonist passes between them), nor are there individual stories within them. Mik doesn't conceive of the sequences as having a beginning, middle or end; he loops long takes. As well, he chooses not to edit, refusing the use of montage to manipulate our look and to tell a story following the traditional dramatic pattern of accelerating action, climax and denouement. For instance, the anger of the restaurant agitators does not follow that of a typical fight curve. It is already dissipated from the start as if something was missing from their psychology. The cameras in both parts repeat this indifference, refusing to focus on anything that qualifies as an event.

I have neglected to say what the main event of the installation is. Reversal Room exists in two parts, but these parts do not succeed each other spatially-we do not move through one to the other. Rather unusually, the two parts of the work displace each other successively, i.e., temporally, within the same space. At the flip of a switch, figuratively speaking, the installation changes. Mik has engineered the installation so that the same five rear-projection screens will display two sets of five synched images successively. (The specially constructed enclosure, which houses the screens, encircles the spectator with a two meter high wall with a wide entrance and a narrow exit.) Simultaneous with the switch on the five screens, the colour of the lighting changes and two small rooms either come into view or are hidden by one-way mirrors.

Both video sequences are shot with five cameras simultaneously, but a different type of camera shot dominates each. In the restaurant scene, thecameras slowly zoom in and out, all directed from different angles toward roughly one area of the room, with each image expanding and contracting at different ratios. In the kitchen scene, a panorama shot rotates slowly on all five screens. These two types of shots are reflected in the architecture itself: the enclosure is round when its mirrors hide the rooms during the kitchen panorama; then becomes star-shaped when these rooms are revealed, reflecting the depth of the restaurant zooms. We ourselves perceptually replay these camera movements. Sometimes we see ourselves reflected as virtual images adjacent to the panoramic projections; at other times our eyes penetrate the real spaces opened up analogous to the virtual spaces of the zoom images. Flush to the ground, the rear-projection screens mask the division between the virtual space of the image and the actual space of our participation.

Before the switch between the two scenes, I paid attention to what happened within the frame, not because of the frame. After the initial startle of the switch, I now look for what is common between the behaviour of the two scenes as they figure within the parallel relationships of active/indifferent and static/dynamic. Yet we need as well to look for these relationships not only in the actions themselves, but within the constructs of the apparatus as a whole as a result of the camera movements and the spatial configuration of the installation which together implicate our activity. Not only the virtual video worlds parallel and intersect. The relationships we would have to discover would be those by which we participate in Mik's installations.

Our observations would have to be situated within behavioural activity, but not according to any preconceived expectations. We would have to abandon every convention we tacitly observed in entering Reversal Room, be it the language of intentionality defining behaviour or our reliance on narrative for the description of events, even that repeated within the montage of films. For instance, my summaries of the two scenes were composed of incidents that I found significant to relate. They ordered a narrative my language unconsciously reproduces, but they do not necessarily describe what "happens." The shooting does not have the same temporal form as the description. It is as if my description and Mik's video transcription also occupy different realms, like the protagonists of the mismatched kitchen worlds, and order experience differently.