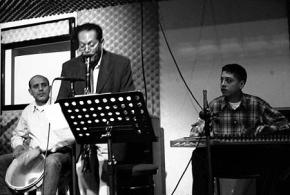 "I am the cinnamon peeler's wife. Smell me."

The Arabic word "maqam" means "place". In Arab music maqam is used to denote the theory of oral composition or improvisation in accordance with certain rules. Every maqam has its own emotional content, which the musician selects depending on the time of day, place and mood. In this art-form, which goes back to the Middle Ages, the tonal structures of the various maqâmât establish the framework for the musician's performance. A maqam is distinguished by certain intervallic progressions of seconds and principal tones which are assigned special significance while the musician plays, enabling him to proceed from one tonal system to the next and thereby explore the entire tonal space. The idea is to vary the basic structure as elaborately as possible by means of improvisation.

Bojan Šarcevic invited a maqam ensemble from Istanbul, the Barbaros Erköse, to play cover versions of world-famous pop songs. The selected numbers - "Come as you are" by Nirvana, "Could you be loved" by Bob Marley, Marvin Gaye's "I heard it through the grapevine" and the Chemical Brothers' techno rendering of "Block Rockin’ Beats" - run an entire gamut of established worldwide styles. In maqam they are all equally "displaced". In his video ("Cover Versions", 2001) Šarcevic shows musicians feeling their way towards the sounds of these hits and eventually appropriating them. The male members of the family ensemble sit in a small recording studio and listen to Bob Marley's "Could you be loved". The process of listening is reflected in their faces. They play a few bars, seek eye-contact with one another, listen again, touch each other, laugh. The players of the traditional darabukke and bendir drums try to imitate the reggae rhythm with its unaccented beats. Their faces express surprise and a little doubt, and they try again. The music develops from their bodies, from the players' silent communication. You see how they gradually assimilate the foreign music. Reggae's characteristic deep bass is rendered as a blend of the sound produced by strumming the canun (a zither), and the mellifluous cello tone. The more confident the players become, the more they abandon tonal sequences and elaborate the melodic line, retaining only the character of the music. The oboe departs so far from the original vocal line that Marley's tune is scarcely recognizable, even if the chosen maqam does capture the declamatory character of the reggae perfectly.

Although "Cover Versions" might be termed hybrid cultural forms, Šarcevic's work does not seem to focus on questions of cultural identity. Indeed, given the broad hybrid musical culture that has developed in present-day Turkey since Atatürk's forcible espousal of the "modern west" in the 1920s, a laboratory experiment devoted to "cultural hybridity" would be a futile undertaking. [1] Instead, Šarcevic shows us musicians tackling something with which they were previously unfamiliar, how they appropriate this music without merely imitating it.

Hearing or playing music involves direct physical pleasure. Sensory perception comes before all theory and criticism, all cultural, historical or economic categories. As Michael Serres put it: "If you close your eyes you lose the capacity of abstraction." [2] Only since the beginning of the last century has musical notation become known in Turkey as a distance-creating, analytical tool. Traditional Arab music depends heavily on the player's physical presence. Musicians are compelled to internalize sequences of tones and manners of elaborating them in such a way that they become one with their instrument. Unlike western music, maqam does not recognize the concept of composition in the sense of a finished work. By the same token, the idea of representation of a fixed, harmonic entity is alien to maqam. This form of improvisation makes it possible to approach foreign music on an extremely direct and physical level. The players accept that there are differences and try to integrate them in their own performance, without having to consider and pin down the piece in its original cultural context.

In Šarcevic's video work "Irrigation - Fertilisation" (1999), isolation is again broken by a direct physical manifestation. The viewer sees a man's legs slowly striding through a clean, unmanned workshop with metal-processing machines. The man walks through this room as if through a foreign body. Water seeps constantly from his shoes, leaving a trickle that gradually forms a painting on the floor. As soon as the legs near a machine, it switches on noisily, as if in answer to the approach.

Šarcevic's work is apparently defined by the motif of deplacement. He isolates objects by moving them into contexts and places to which they do not belong. For a brief moment this causes a schizophrenic detachment. In the new environment the foreign body initially triggers uncertainty. You can sense the musicians' misgivings, their problems with the unfamiliar music, their hesitant attempts to find acoustic equivalents for the sound of the electronic instruments. Gradually, the differences that cast doubts on the accustomed system become apparent. Even so, the eroticism of careful observation and reaction seems to be the only way towards an orientation, the only way to escape from isolation or to integrate the alien aspect. A retreat from socio-analytical discourse into intimacy is effected. In the case of "Irrigation/Fertilisation" this leap breaks the dominance of the prevailing system; however, the incontinent protagonists' reference to the workshop remains a personal one. He is unable to find an alternative social design.

"Worker's Favourite Clothes Worn While S/he Worked" (1999) does however succeed in forging a link between two separate areas of life: work and leisure. Šarcevic asked workers to buy clothes they feel best in, and told them to wear this gear at work. They chose ordinary, everyday European outfits. Although the materials and colours reflect individual preferences, they do not really express the wearers' identities. A fortnight later the clothes bore the traces of work: grime, rents and sweat stains. Habitual movements had creased the fabrics. In the form of these bodily traces, work and leisure attire had merged, portraying the wearers' personal traits.

Projected lifesize, Šarcevic's "Untitled" (2001) shows a video of a young African mother relaxing on a low chair in front of her house. Her feet are propped up on a stool. A little girl, presumably her daughter, brings a cassette recorder and switches it on. Watched by the viewer in front of the projection, the woman starts listening to Nina Simone singing a song. Apparently nothing can distract her attention. Life around her goes on as usual; we hear noises from the city, see a neighbour clearing something away. She is joined by two daughters; a small boy runs through the picture with a ball, an older youth comes by with his girlfriend, exchanges a few words with the mother and departs. Although the jazz of the Afro- American Nina Simone comes from another world which has nothing in common with this woman's life, one gets the impression that the music belongs here. No noticeable tension is generated between the song and the young woman. Although you can tell that she is thinking of something while she listens to the music, she does not seem dreamy, and certainly not wistful. She may be dozing, but she is perfectly aware of what is going on. Her tranquillity is all the more surprising in view of the fact that the viewer, observing the nervous gestures of the daughters who keep looking into the camera or bashfully scratch their necks, becomes more and more aware of his/her own presence. The mother, though, is evidently not at all camera-shy and makes no attempt to evade the viewer's eye. Despite the observer's interest in her body, her movements, her large hands and her voice, she is not sexualized as a "mysterious, black woman", nor is she turned into a stereotype image of "dark Africa". She remains elusive. It is impossible to enter the world of her thoughts. She is so firmly anchored in her dignified corporality that she assumes presence in the exhibition gallery. In the end, it is she who takes possession of the viewer by dint of her presence.