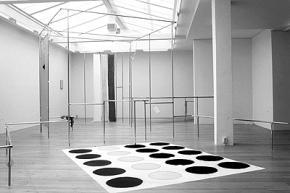 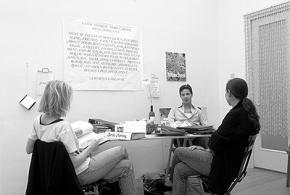 This exhibition brings together the work of two artists who, each in their own way, question the reality of being an artist and the conditions in which art is made. Twan Janssen (1968, Milsbeek, Nl) and Sands Murray (1974, Topeka, Kansas, USA) both address the social persona of the artist in their work; the artist's role in the 'art world' -the field of power within which art dealers, curators, museum directors, critics, collectors and public all assert their own influence. With a distant, ironic view (Janssen) or a passionate surrender (Murray), these artists are both participants and commentators in the bustling arena of contemporary art, trying, resolutely, to manipulate its mechanisms. Janssen even goes so far as to say that he no longer considers himself an artist, but an actor in a play about his own artistic career. He writes an annual synopsis of his own biography in which he sketches out the course of his career for the coming year, complete with expected exhibitions, reviews and sales. He doesn't view the installations, sculptures and paintings that the artist Twan Janssen makes in that year as being autonomous, rather, he sees them as props with an inventory number attached. He recently supplied his entire oeuvre with a back-dated stage-property number. To bring reality in accord with his career plan, he stages meetings with the prospective players in his biography, assisting them with the script and stage directions. At the end of the year, he publishes an abbreviated version of his biography in which he compares the synopsis with what really happened.

Folly is the title of the installation Twan Janssen has designed for his exhibition in Bureau Amsterdam: an architectural construction of chrome pipes which form a structure that connects and integrates a series of recent props and text pieces. The useless, sample architecture is a true epicentre for Janssen's game with art and its biotope. Sheets of acrylic paint are draped over the chrome framework in the main space of Bureau Amsterdam, while from small speakers integrated into the construction you can hear Twan's Theme; his theme tune as an artist. Embedded in transparent layers of varnish on sheets of MDF are papers bearing dialogues and correspondence from his biography for the year 1998. Around the construction are specimens of Janssen's pastiches of painting. Whoever sees these props cannot help but compare them with the 'soft paintings' the Dutch artist, Wim T Schippers made in his Fluxus period. Though Janssen goes further than Schippers. He completely removes the acrylic, oil, spray or glitter from the canvas and stretcher, allowing the paint to exuberantly colonize the space: paint hanging from threads, streamer-like strings of paint squirted straight from the tube, pigment scattered on the floor, paint in a corner like the crumpled remains of a birthday party or like handkerchiefs neatly folded in the drawer. For the spectator at this shimmering orgy of colour, it is amusing to experience that the art works Janssen wishes to subject to his strict directions, often pay no attention to the director, breaking through the facade of camp and irony, surrendering themselves to an old-fashioned role of objects of desire for the eyes.

Where Janssen begins from the creed 'reality follows biography', Sands Murray does the reverse. Art and life flow into each other in his work. He communicates directly with the public by staying in the exhibition during the show and enthusiastically initiating personal conversations which, until recently, he followed with a night in bed with the artist. Murray's photographs, paintings, texts, installations, video and audio tapes are, as it were, by-products of this artistic attitude and therefore have an unavoidable biographical character. They provide an image of a young American with a slightly Dadaist personality and appearance, preparing himself for a grand and compelling life in the artistic world of old Europe. Fashionable and elegantly dressed, skin cared for by moisturizing creams, it is his aim to be part of the social ballet of the 'charmed circles'. With a mixture of vanity and egotism, he reports on his meetings with curators, restaurateurs, museum directors, fashion designers, friends and fellow artists, in his diaries and sound-recordings.

Where Janssen analyses the bureaucratic and social structure of the art world, and then tries to manipulate it, Sands Murray lets life and art break over him. In fact Murray, already in experimenting, discovers what being an artist involves. He loves to spend the whole day talking about his appearance, his love life, his relations with fellow artists and his position in the art world. In his CD Stories (1996), he recites a series of stories that are a fascinating mix of reality and fantasy. As a young Quentin Crisp, in a decided tone he makes the listener party to his views on body care, etiquette and gastronomy: 'Elegance, excellence, hygienic refinery, delicate perfumes and careful care. We must do our best and protect our precious selves. Upholding our own standards to demonstrate to others the courage to do the same'. His love life varies from a romantic dinner-for-two in a smart hotel to masturbating over the sink, and about his art he concludes: 'My work exists more over drinks'.

Murray is an artist of whom it is not clear whether he puts his life into art or art into his life. Art and life become conceived of as processes, constantly in motion. Art can be there at any moment, but can also disappear again. Not without provocation, Murray admits that his exhibition in Bureau Amsterdam is his first, and could just as easily be his last. For Murray, art is present in an accidental meeting or it materializes along the way. His objects have an unedited, casual form, as can be seen in the archive folders containing memorabilia and scrawled texts. Murray has arranged the back space of Bureau Amsterdam as a home-base for 'Sand Murray's Personal Artistic Business', the holding from which he coordinates his artistic activities. He is there several days a week to offer access to his diaries and is available for informal chats about art or confidential tête-à-têtes.