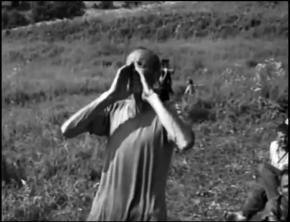 Stedelijk Museum Bureau Amsterdam and Castrum Peregrini are organizing a collaborative event on Sunday, May 31, to create a bridge between their exhibitions “Resolution 827” and “exclude/include. Alternate Histories”, about traumatic and repressed histories. Artist Anna Dasovic, participating in both exhibitions, will present her lecture performance Before the Fall there was no Fall at Castrum Peregrini. Journalist and writer Robert Dulmers will give a presentation about his recent publications on the fall of Srebrenica at SMBA. Dr. Erna Rijsdijk will respond to both presentations from her perspective. Hereafter all will engage into a conversation moderated by Lars Ebert (Castrum Peregrini) and Joram Kraaijeveld (SMBA).


In her ongoing research Anna Dasovic focuses on the atrocities that took place in Srebrenica. She deals with unrevealed and erased footage she managed to obtain from the closed archives of the Dutch Ministry of Defence, while other images of the events in Srebrenica have been compulsively shown and re-shown throughout the West for the past 20 years. The performance challenges the massacres’ articulation by the West as merely a traumatic quotation from the past. Using gestures of repetition, and the historical and aesthetic figure of the erasure, Dasovic evokes an image – one that is inherently unable to represent the events in Srebrenica.

During the Yugoslav wars Robert Dulmers was a reporter on the events he witnessed in Zagreb, Osijek, Split and Sarajevo, and other cities in the region. He has written numerous articles, including pieces in the Dutch weekly opinion magazine De Groene Amsterdammer on the role of the Dutch government in the fall of Srebrenica. In 2001 he published his book Zwart in which he writes about his traumatic experiences as a journalist in this war zone. Dulmers reported on the trial for genocide and crimes against humanity against former Bosnian Serb leader Radovan Karadži? at the ICTY in The Hague, which lasted five years.

Anna Dasovic (b. 1982) holds a BA in Photography from the HKU University of the Arts Utrecht (2010) and will complete an MFA at the Dutch Art Institute/ArtEZ, Arnhem, this year. In her research-based practice, Dasovic examines the manner in which memories are produced through the visual. Often working with subject matter that derives from a personal engagement, she specifically focuses on the dialectical constellations that visual traces carry with them through the present. Dasovic ’s work has been exhibited at several venues including the Van Abbemuseum in Eindhoven and the Museum of Yugoslav History in Belgrade. In 2015 she was artist in residence at the Centre for Contemporary Art in Celje, Slovenia. Previous residencies include Casa Tres Patios in Medellin, Colombia and Residencia en la Tierra in Montenegro – Quindío, Colombia. Anna Dasovic works and lives in Amsterdam.

Robert Dulmers (b. 1965) studied Philosophy at the University of Amsterdam. During 1981-1982 he worked as a freelancer for Dutch public broadcasting channel VPRO. He has also worked as a journalist for De Groene Amsterdammer and Vrij Nederland and as correspondent for Radio 1. Dulmers is known for his years of reporting from the former Yugoslavia during the Yugoslav Wars. Dulmers has written multiple books based on his experience in the former Yugoslavia.

Erna Rijsdijk is a University Lecturer at the Netherlands Defence Academy. She studied International Politics at the University of Amsterdam, FU Berlin and at the University of Newcastle upon Tyne. In 2012, she finished her PhD research Lost in Srebrenica: Responsibility and Subjectivity in the Reconstructions of a Failed Peacekeeping Mission at the VU University in Amsterdam at the Faculty of Law. She is currently involved in research projects on ethics and international politics, image warfare and gender and security.

Before the Fall there was no Fall is supported by the AFK (Amsterdam Fund for the Arts).