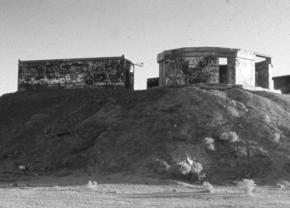 Rosa Barba presents three new film installations specially for Stedelijk Museum Bureau Amsterdam, which she made as a result of her stay in the Mojave Desert in the United States.

Rosa Barba is known for film installations in which cinematographic means such as image, sound, subtitling and projection methods are analysed and restructured.

Most recently she has produced the short docufiction. Outwardly from Earth's Center, about an island that is in danger of disappearing. The film is a psychoanalytical investigation into how the identity of a society, which once will vanish, can be saved. What begins as a documentary ends up as a wild fantasy about how this Scandinavian island can be rescued from the clutches of the waves.

The three new film works in the exhibition 'They Shine' at Stedelijk Museum Bureau Amsterdam occupy the middle ground between a purely cinematographic idiom and documentary. The scene of the action is the Mojave Desert in western America. Around the Second World War this vast area became a testing site, primarily for military purposes. Weapons of all kind, atomic bombs, rockets, aeroplanes and vehicles competing for land speed records were frequently present in this desert. 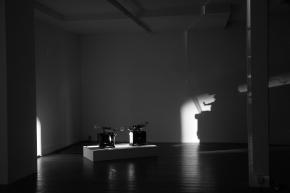 The use of the Mojave Desert as a test site has altered various areas into settings that have become as strikingly futuristic as they are ruinous, the gigantic solar energy panel and windmill parks sit alongside the abandoned bunker complexes, trailer parks, heaps of scrap metal, and the largest aeroplane graveyard in the world.

Barba shows these locations in three different film installations, accompanied by statements from local residents as the images pass before our eyes. What emerges from this amalgamation is a totally idiosyncratic way of thinking about these objects: divorced from technological reality, guided by an equally disconnected, utopian and/or religious faith associated with the power of technology. The 16mm and 35mm film images of the vast desert form a timeless backdrop for a reality that seems to have been filmed in the future rather than the present, with archaeological sites that slowly but surely attain a mythological status, just like science fiction.

Ultimately, 'They Shine' can be read as a metaphor for the modernist era. Modernism still plays an important role, but the technological crux of it has become a misunderstood archaeological relic. And that must be seen against the backdrop of the United States today, where both religious and technological fundamentalism flourishes as never before.

Rosa Barba studied at the Academy of Media Arts, Cologne and at the Rijksakademie voor Beeldende Kunsten in Amsterdam. She recently had exhibitions in the Kasseler Kunstverein, Fridericianium (2005), Baltic Art Center in Visby, Sweden (2006) and Kunstverein Medienturm, Graz (2007), among others. Barba lives and works in Cologne and Amsterdam. More information at www.rosabarba.com.

Part of Rosa Barba 'They Shine' is the publication Printed Cinema#8 ? Waiting Grounds, named after one of the 16mm film installations in the exhibition. Printed Cinema is an ongoing publication project connected to various works and contexts.