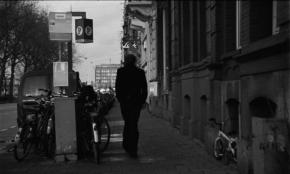 NÂ°95 The Clouds are more Beautiful from Above

The homemade spacecraft featured in Guido van der Werve’s Nummer zeven, the rocket movie 2 looks bound to fail: a deliberately retro ‘rocket ship’ redolent of those from a half-century ago, more Ed Wood than Star Trek. And indeed, van der Werve knows the slight craft he’s designed will never achieve the escape velocity needed to exit the Earth’s atmosphere, roughly 40,000 km/hour. Thus the flight’s mission – to launch a piece of meteoric rock back into space – is implicitly doomed. And much like van der Werve’s films, the history of transportation is also littered with quashed dreams, failures, and falls: grandiloquent names like Concorde, Challenger, and Titanic almost precognitively augured their own spectacular demises; Germany’s Maus tank, the world’s largest, was so heavy that it never took to the battlefield; and the Swedish warship the Vasa – at the time the biggest and most lavishly decorated vessel ever built, gobbling up 16 hectares of timber – capsized and sank before sailing a single mile on its maiden voyage in 1628. The luminous ether in particular – the staging ground for Rocket movie 2 – has proven especially prone to ill fate: the Europa and Soviet N1 rockets of the 1960s were both cancelled after 100% failure rates, and the first animal in space, Laika the dog, immolated just a few hours into Sputnik 2’s five-month journey.

Van der Werve himself is a kind of perpetual escape artist, transcending the drone of daily life by concocting otherworldly scenarios in which his protagonists can briefly cast off the coils of their uncharmed lives, as the marginalized sad-sack fleetingly becomes the center of attention. Again in Nummer zes (‘Steinway grand piano, wake me up to go to sleep and all the colors of the rainbow’), we find van der Werve sitting alone in cafes, in restaurants, or on benches, not even an outsider artist but just a plain outsider. At the same time, the voiceover narrates the illustrious success story of the Steinway piano company, and how quickly it grew into the standard for concert halls everywhere. Today they sponsor an exclusive network of the world’s best concert pianists, a close-knit family of talented insiders, from which our protagonist is painfully excluded. Thus, after hearing the exorbitant price from a Steinway salesman, he slips into a reverie in which a Concert Grand Model D is delivered to his small apartment, and he soon leads a magically conjured orchestra through a recital of a concerto called Romance, by Chopin, another tragic artist who eschewed crowds in favor of small spaces like this one.

Common to van der Werve’s loveable losers is a powerlessness, an inability to control the circumstances that keep them down, like a rocket at the mercy of gravity. So instead of trying to change their luck, they flee into a sublime and spotless dreamworld, invisible to passersby, where the unfairnesses of everyday life are kept blissfully at bay. Even suicide becomes a Sisyphean farce; whereas previous works by van der Werve featured the protagonist repeatedly failing to kill himself, now the suicide is vicarious, transposed in this case to the hopeless rocket, allowing the escapist to wallow in the melancholy of it all from a safe distance.

Because the escape pods that van der Werve films, mix pedestrian details (the transport of the piano) with tragicomic punctuation (the ambiguous rainbow that ultimately takes the place of the piano), they never lapse into treacle, instead resembling the structure of real dreams, surreal fairy tales in which bathos and pathos coexist. In addition to being a trained pianist, van der Werve also played for years in a metal band, which perhaps explains the unexpected moments of discord that continually interrupt his dreamscapes. And the action in Nummer zes unfolds even more hypnotically than before, with near-still shots of a minute or longer, and languid pans over the piano itself, glimmering and bold, a transcendent object of desire.

But these delusions of grandeur ultimately remain delusions, crashing down when the piano is reclaimed by the movers, once again in the rain. Society is obsessed with its failures, micro-analyzing their details in multi-volume accident reports, or in strangely compelling shows like the Seconds from Disaster series, which atomize and then recreate every tragic second. Like van der Werve’s rocket that cannot escape, the recently deceased Canadian actor James Doohan – the non-leading man who received minor fame as engineer Scotty on the original Star Trek series – tried for decades to escape the gravity of his character’s long shadow, to escape the fake Scottish accent he’d created, or the apocryphal “beam me up Scotty” tagline that he never uttered, or his deathless appearances in Star Trek sequels, cartoons, parodies, and fan conventions. But even in the afterlife, Doohan continues to fail – two attempts to launch his ashes into space have flopped, and his remains now rest in a purgatory of sorts, deep in a Houston vault. Yet somehow, like that inner club of Steinway superstars, Star Trek’s rakish creator Gene Roddenberry succeeded effortlessly, managing to get his ashes spacebound as far back as 1992, and then on the first try. In fact Roddenberry has continued winning accolades from beyond the grave, with a planetarium, asteroid, and Mars crater now bearing his name, and a posthumous award from NASA for distinguished service to the human race; Doohan, on the other hand, must make due with an Internet-based fan club. The unchartable vicissitudes of life are such that for some, escape remains the only reasonable option, even with the full knowledge of its unattainability.

Douglas Heingartner is a journalist based in Amsterdam

Guido van der Werve (Papendrecht, 1977) finished the Rietveld Academie in 2003 and is now student at the Rijksacademie in Amsterdam. His films have been shown regularly in exhibitions and film festivals. In 2003 he received the René Coelho Award (Netherlands Media Art Institute, Montevideo/TBA). In 2004 he was nominated for the NPS Award for Short Film, and in 2005 for the Prix de Rome.