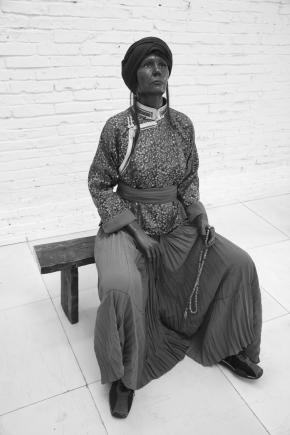 The first large solo exhibition by Mathilde ter Heijne in the Netherlands has a specific theme: the matriarchate. Opinions about precisely what the matriarchate is are divided and move between extremes, from the conception of an ideal society in harmony with nature to the horror scenario in which women castrate men. In any case, it is not the opposite of the patriarchate, or control of society by males, as we know it today throughout the largest part of the world. The word 'matriarchate', derived from the Greek, means something like 'in the beginning the mother', which in the ideal case points to a central role of the mother. The first publication on matriarchal societies appeared in 1861. For the last few decades there has again been serious research which has sought to sketch out a systematic picture of various matriarchal societies and their economic, political and social characteristics.


Ter Heijne considers research on the matriarchate along various avenues. The work Experimental Archaeology is comprised of replicas of prehistoric earthenware objects with symbols and motifs that refer to a widespread writing system from prehistory around the Mother Goddess, which is the foundation of our culture. The precise reconstructions are moreover fired in a ritual manner, by the light of the full moon, as can be seen in the video film Moon Rituals. The motifs of cyclic time and fertility return again, in part, in the recent Red, Black, Silver and White, a fashion brand established in cooperation with the Berlin label Wedel & Tiedeken. Its first collection, Goddess, consists of a total of nine ponchos bearing geometric patterns derived from old Eastern European symbol systems which preceded alphabetic writing. In het book The Language of the Goddess (New York, 1989) the prehistorian Marija Gimbutas demonstrated that the magical Neolithic symbols are proof of the dominant status of the goddess over the god and of an overwhelmingly matriarchically ordered social system in the early history of humankind.

The real eye-catcher in the exhibition is The Reconstruction of the Communal House of the Qiau Zi Family. It is a replica of a 200-year-old Mosuo house that until 2007 was still inhabited by a traditional Mosuo family. The Mosuo are a matriarchically oriented tribe in the south of China, with about 60,000 members. Their society is characterised by gender equality, the right of women to choose their partners and the absence of marriage, the nuclear family, private property and class differences. The house plays a central role in this society as the symbol of collectivity and as a place for goddess worship.

Together with still other works the exhibition gives the impression of an ethnographic presentation – not one in which a particular people, a distinct culture or historical entity is central, but one in which the idea of the matriarchate, as the counterpoint to the present, overwhelmingly monotheistic and thus patriarchal societies, is being tested out. It is an idea that has gone underground since the 1970s, together with the omnipresent long-haired males, the strong anti-capitalist tendency, experimentation with communes, occultism and an outspoken feminist movement. In that sense ‘Long Live Matriarchy!’ is a statement, certainly with respect to this time in which hegemonic, male-dominated, profit-oriented culture (particularly that of the financial world) has come under fire for its presumed role in having caused the credit crisis.

Work by Ter Heijne covers a wide range of disciplines. Since 1999 she has chiefly been interested in the theme of sacrifice within power relationships in relation to religion, gender and political backgrounds, with her installations, performances, films and video works generally drawing on existing source materials such as films, photographs, psychotherapy sessions or, for instance, religious rituals. That is also the case for her more recent work around the matriarchate, for which archaeological and ethnographic material forms the foundation. One work in the exhibition in SMBA was recently to be seen in the exhibition 'Rebelle' in the Museum for Modern Art in Arnhem: Women to Go, a series of picture post cards with portraits of various women, each time with a biographical note on the back regarding the nearly forgotten historic woman pictured.

Ter Heijne's work has rarely been shown in the Netherlands since 2000. Born in 1967, she studied art in Maastricht and at the Rijksakademie in Amsterdam, and since then has lived in New York and Berlin. Her solo exhibitions have included shows at the Migros Museum für Gegenwartskunst in Zurich (2002) and in the Berlinische Galerie (2006), and recently also in the Arndt & Partner gallery in Berlin. In early September she delivered her contribution for the Leidsche Rijn Sculpture Park in Utrecht. Her work is to be found in numerous museum and private collections all over the world.

The bilingual English/Dutch SMBA Newsletter nr. 112 is appearing to accompany 'Mathilde ter Heijne: long live Matriarchy!', with a contribution by Hendrik Folkerts, art historian and initiator/founder of Troublemakers, the research platform on feminism.

A hand-out with further information about the various works will also be available at the exhibition.