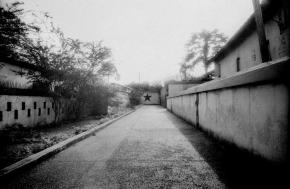 ‘Identity bluffs’ is the second exhibition to take place in the framework of Project ‘1975’. Bringing together works mostly based on photography and video, the exhibition sheds light on the ways in which migratory processes related to globalisation affect the featured artists’ practices.


The increased mobility of information and people today has altered the modes in which contemporary subjects form their images of themselves and of others. An interest in the continuous formation of identities is the thread connecting the works displayed here. The participating artists present multilayered (self-) portraits of individuals who grew up in European or African nation states, which nowadays seem to have difficulty formulating appropriate political responses to contemporary migratory processes, perhaps partly due to the fact that in these states colonial mindsets still prevail. ‘Identity bluffs’ undermines fantasies that reduce people to fixed types, and at the same time acts as a platform for nuanced and multifaceted views on the complexities of life under post-colonial conditions.

The exhibition includes Bruno Boudjelal’s video installation Disquiet Days, a compilation of photographs taken in Algeria over a period of ten years during the artist’s visits to his father’s home country. With his camera Boudjelal sketches unparalleled scenes of Algerian life and its city- and landscapes, often in a colour scale that is reminiscent of early expressionist painting. The exhibition also includes Mahmoud Khaled’s This Show is My Business, a video recording of an interview with a male belly-dancer living in London, who talks about his artistic practice in a cultural setting where oriental dance is generally not regarded as a high form of cultural practice.

Another highlight is Sara Blokland’s installation Home. This photographic dissection of homes located in Amsterdam results in a complex installation of videos and photographs, either taken by the artist herself or found by her in Amsterdam’s municipal archives. The work 1966, a series of photographs by Nii Obodai, attempts to reanimate the ideal of freedom, which in the 1950s inspired the independence movement in Ghana, but which was nearly muzzled in 1966 during an almost bloodless coup d’etat. For her new work, Lucia Nimcova asked Kenyan artists to ‘translate’ David Rubadiri’s poem An African Thunderstorm into pictogram stamps. These stamps are offered to the exhibition visitor for making a stamped poem on a copy of one of the booklets presented, which comprises a controversial interview with an NGO worker. Nimcova invites the visitors to take the booklet with them in order to (re)read the interview as they have the opportunity.

Sara Blokland talks about her projects, including the work currently exhibited in SMBA, tying it to earlier and subsequent works such as Linda (2006), a work consisting of photographs of the artist’s sister who is a succesful pop singer. As a visual artist, Blokland mostly works with photography. Her work reflects on the complicated role of this medium in relation to the his- tories of individuals, the concept of family and cultural heritage. Blokland is in conversation with Chris Keulemans.

In the 1990s, Chris Keulemans (1960, Tunesie) was director of De Balie in Amsterdam. After this, he worked as a writer and journalist, travelling to different conflict areas such as Jakarta, Beirut, New Or- leans, Prishtina, Sofia, Algiers and Ramalah. At present, Keulemans is initator and artistic director of the Tolhuistuin, a new art centre to be opened in October 2011 and located in the North of Amsterdam.