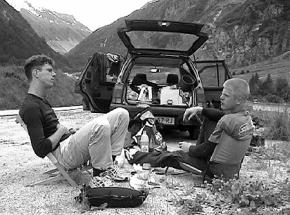 The subjects of Albert van Westing's film works are evanescent, sometimes almost ineffable. Appearing as fixed points in a slowly turning world, they seem decisive and yet difficult to pin down. The five films in this exhibition present very little actual incident, focusing instead on simple, quotidian situations such as eating, watching a video or taking a nap filmed in an innocuous, seemingly surreptitious fashion. Van Westing has said of his photography that it is 'free of anecdote', implying that his approach to the narrative aspect of his subject matter is less important than the methods of framing, editing and presenting that he employs. The same can be said of his films, and in fact, the subjects of these films - a man being buffeted by the wind on top of a mountain, for example, or a man lying prone on the gritty sand of a Mediteranean beach - are happenstance situations that the artist simply 'came across', while researching locations in which to make work. 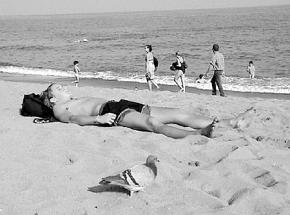 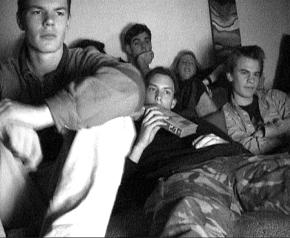 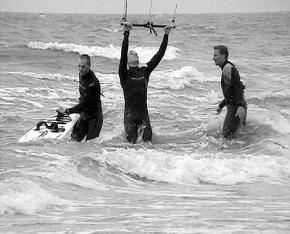 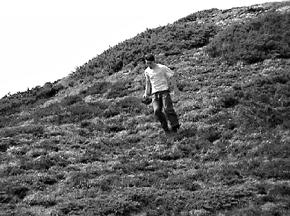 Away (Weg), shot in the Alps between Italy and Switzerland, presents two men eating a picnic next to their car. The camera angle remains static throughout the recording - tightly framing the two protagonists against the dramatic, Arcadian landscape of the towering mountains behind. At either edge of the picture, two roads twist their way from foreground to background, occasionally marked by the odd car or group of walkers making their way deeper into the landscape. With its classical, pyramidal composition, the film refers to painting and in particular renaissance portraiture where the sitter is set against a landscape that fades into minute detail behind. Van Westing chooses his position to film carefully, monumentalising his subjects through compositional devices without elevating the importance of the situation. The two men relax while eating and chatting, making trips back and forth to the car to pull out more food or equipment and clothing. Various details point to the reason for their trip - picks, ropes and maps suggest they are embarking on a climb yet their destination is never made clear. Although nothing untoward happens, the static intensity of the obviously handheld camera seems to silently celebrate the absorbed simplicity of the scene that it records - the tiny, precise details of the picnic and the million small but significant things that we do each day just to exist. We begin to notice what type of bread the men are eating, the fact that they change into matching t-shirts, or the bottle of lemon spa that sits upright in the background. These details seem somehow important against the inscrutable backdrop of the mountains: evidence, perhaps, of the accumulative tasks that we make each day as a method of compartmentalising the fleeting nature of daily life.

The two men seem aware of the filming and yet continue as if the camera wasn't there making the role of the artist as directorial recorder unclear. The scene stays natural, although the occasional small jogs and shakes of the picture remind us of the presence of the artist who tries to keep his camera steady for nearly half an hour.

In a similar manner to 'Weg', 'While Maxime rests' (Terwijl Maxime rust), seems nonchalantly simple, enacting a subjective displacement through its fixed gaze. The film also depicts a landscape, this time a typical beach scene with sand and sea divided by a prone sunbather, lying almost motionless while people walk by around him. The sunbather seems caught unaware in a state of non-being: Neither asleep nor awake, he becomes a floating but permanent fixture which rather than attract our gaze, ends up deflecting it on to the other, more vagrant details of the scene. We watch the children playing in the sea behind and at times the banality of the image turns into absurdity as pigeons peck around the sunbather who continues to doze on obliviously.

Although Van Westing's camera might look as if it is a surreptitious one, but all the people filmed clearly know they are being filmed. Therefore his films seem to refer to documentary film-making or 'reality' TV, but the blankness of his images creates a breathing space and a kind of narrative denial which refuses the normal procedure of immediate image consumption. For Van Westing, the works are, also, 'about looking', about a way of exposing the mechanisms of the gaze to make us aware of the partiality of our position. This is most evident in the work 'Watching a video', (Video kijken) where we glimpse a group of young people sitting together on the floor watching a film that we cannot see. The picture seems carefully composed. Filmed from the side, the group appears almost sculptural, as if arranged, with several people sitting or relaxing in contraposto poses, flanked by two men sitting upright on either side of the image, who seem to be concentrating on the film the hardest. Recorded in the dark, in real time, with a very long exposure, each reaction and tiny movement becomes exaggerated and monumentalised as if in slow motion which lends a grace and beauty to the work at odds with the domestic familiarity of the scene. The unconsciousness of the group's reactions - one man, for example, gently chews on the video box throughout - is precisely what makes them so appealing. 'Watching a Video' enacts a strange pictorial inversion: here the viewers have become the subject and we, as secondary viewers, find ourselves watching people involved in the act of looking, something that normally remains hidden. In this way, the artist exposes the flip side of image making with a pleasing self-reflexive symmetry.

'Lessons', (Lessen) as its name suggests, follows three men as they take a kite surfing lesson on a grey, windy day. We see them move around in the water, their arms grabbing ropes which move up and down and occasionally the surf board as it bobs around in the waves. The kite, which pulls the surf board along, always remains out of view, making the movements of the men in the water seem without purpose although there is an agreeable sense of abandon to their activities. The colours are washed out and direct and although the camera shifts while recording the men's movements, the zoom is never used so that they remain at a distance. The sport becomes quasi-balletic, abstracted through its isolation and authorial distance. Like Weg, 'Lessons', seems to comment on the futility of 'leisure', activities that we have adopted and on the absorption with which we partake in them, portraying the human body at its most vulnerable, laid bare and exposed.

Van Westing's art is a humane one where the emotional content is nascent and honest, seeming to bear truths by its apparently straightforward nature. In Van Westing's photographic works the scene in the picture stays untouched. The picture however has been manipulated many times through mechanical procedures of editing, exposure and photocopying. In a comparable way in his films the artist didn't interfere in the scene. He precisely framed it, free from extraneous incident, reduced to an ineluctable whole. Here the human body appears lonely and susceptible, displaying a mental and physical susceptibility which is at once touching and also fascinating. The scenes are transient yet archetypal and they could, in fact, be anywhere as there are no revealing details or particularities to set them apart and yet through the process of filming, they become singular, fascinating. Whereas van Westing's photographs might comment on the temporary, immediate connection between strangers here the artist is a bystander, letting a subject develop of its own accord, creating a kind of pause, an interstitial space, with a before and after that we can only imagine.