Gozaimas, a Japanese form of polite language, is the title of the first collaborative project by the Amsterdam artists Lara Schnitger (Haarlem, NL, 1969) and Matthew Monahan (Eureka, California, 1972), which is being presented at Stedelijk Museum Bureau Amsterdam. Lara Schnitger and Matthew Monahan have spent the last year on a residency at the Kitakyushu Centre for Contemporary Art in southern Japan. They used this period to prepare their first collaborative project for an exhibition at Stedelijk Museum Bureau Amsterdam. The slick, futuristic world of Japanese computer games and manga comics presented a challenging context for a vigorous dialogue between these artists. In the small studio at Kitakyushu, Monahan's hallucinatory world of feverish, staring warriors and frightening woodland spirits blended perfectly with Schnitger's flighty, spatial constructions, which cleave to floors and ceilings like alien creatures. In Japan this one-off artistic collaboration between Monahan and Schnitger generated a series of works which, although the artists' individual signatures were still recognizable, above all bore the traces of their dialogue with what to them is a strange and exotic culture. This work will be presented in Bureau Amsterdam as an installation that will occupy the entire space: a true phantasmagoria of monsters and organic structures made from tartan and camouflage fabrics, with gladiators and porn-cartoon collages created using ingenious printing techniques. In the following text, Matthew Monahan presents an impression of the duo’s stay at Kitakyushu. 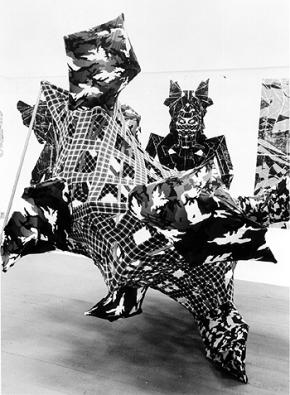 They had no other choice but to continue as if nothing had happened. The wedding gifts were safely stored on the other side of the world in a room about the size of their new apartment and there was little else to remind them they were newlyweds. In fact, there wasn't anything to remind them of anything and they were gently slipping into amnesia. They had a clear view of a spotless parking lot and a sidewalk. Every movement stood out. An old lady passed by in the oval shadow of a parasol she held with white gloves. Later a uniformed man in slippers collected cigarette butts from the brickwork of the sidewalk. After a while it was hard to tell if things were far away or if things were very small. To determine the actual scale they would have had to go outside into the heat. Between the vinyl walls, at least they could hear the air-co vents in swing mode, and they could stab at the air with the remote control. It was the hot season of the cicada and every inch of air was whistling with their ultrasonic feedback. It was the sound of pure heat and the town was their instrument. Every object seem to emanate its own frequency, and as he focused, he discerned a chain of micro sonic clicks connecting him and the pile of clothes on the floor. She pulled off her skirt and dropped it in the pile. No matter how little she wore she wasn't naked enough for the heat. At night it was no different.They lay stiffly folded into position on the narrow bed, trying to simulate the breath of sleep. On cue they began to turn over and he said ,"Flip."

"Are you asleep?" she asked.

"Ik denk it niet" he admitted.

He stood at the end of the hall in a pile of shoes.

" Each day is a journey from the coffee to the beer."

The street was empty, animated with small lights blinking like an un-played pinball machine. From where they stood the road sloped smoothly into Family Mart. It was plugged into the corner, outstanding in the block of dim garages, glowing all day and all night, ever-ready. Every minute of everyday in every timezone, Family Mart was open, as constant and bright as the speed of light. It had no past or future, and for them it was close enough to eternity to fend off the dwindling hours of insomnia. Family Mart was timeless.

The sidewalk was meticulously inlaid with Braille tiles; Lego Blocks , nines and twelve's were snapped into a trail leading the blind as far as they could feel. "They must have thin soles to read this." she said . He pictured a ghost in sandals scuffling out to cigarette machines on the corner. At the crosswalk they stalled to watch the lights. Every corner was red and the empty street was frozen in anticipation of the change. They placed a bet on which light would change first. As usual,she won and her light sang out like an ice cream truck :Da do do duh ,duh duh do.

"He's playing 'Catcher in the rye' " she said. He loved her pronouns. " If a body catch a body..." He was pacing out the cross walk in short steps in order to stay safely on the white strips. "Zebra crossing," he declared so that he wouldn't lose the way. In transit he always seemed to lose something, perhaps this time it was more than a toothbrush. The flight attendants warned, "Objects may have shifted in the overhead compartment." They stopped in the middle of one of the lines to see the mountain at night. It was invisible in the dark, moist air but the monorail cut a diagonal into the sky like a weak thunderbolt that escaped the city grid. A triangular sign high above the street depicted a man on a cross walk.

The glass doors of Family Mart were colored with stickers that fused with the bright, depthless interior. The logos slide away from them as the doors opened. A bell went off and four attendants shouted something. She heard "Champs Elysse!" and he heard "Dont-touch-my-mustache!" In any case, there was no emergency. The attendants were at ease again while he recovered from the shock; the doors had wiped him clean like a pair of squeegees. She was already in the shelves. Everything snapped at her eyes, blinking, edible, illegibles and she grabbed for something close, a sort of shrunken phone book tied up in straps. Peeking at the corners of coarse newsprint, she crouched down, slipped off the knots hoping no one saw. It was a secret book of shattered images: explosions of line, bending and cracking the image into sensations morphing into holes and pokers of used up dolls, empty bodies perforated with ecstatic signs, penetrated in furious censorship... Boys groped the frame, thin grimaced shadows working all the buttons...The girls body suspended in the twilight of lubricated spaces crackling with dizzy stars.

She looked up from the porn comic and saw him standing at the beer frigde. He read across the cans. He had to choose: Autumn tones, insignias of barley, hops, and the portrait of a farmer with names like "good value" and "Super Hops, goes with the good times" He passed into a more expensive shelf of abstract cans where gold stars, stripes and dragons stood like a little army. But below he saw it, "little boy", a polished aluminum bomb as big as his head. It encased the chemical elixir. "Beer can," he said out loud as he hefted it up to read :"Refined for increased drink-ability" The top was embossed with Braille " for the blind-drunk". The sidewalk had transformed into a beer. This amused him, and he wore a faint smile as he stood at the register.

A short girl scanned the bar code and murmured something. There was no way to know what she said and there was no way to calculate the effect that her bridge-less nose, small nostrils, and buck tooth overbite had on him . Some faces were hard to turn away from. He flattened a crumpled bill on the counter. She paused and blushed to signal that he was short of change and after a shuffle of unknown denominations he was out the door. Even outside he could hear them all say, "Gozaimas."

She showed him the comic through the bag. She was smiling again and nearly standing on her tip toes.

The drink began to make things soft again. The body was so easy to fool. Family Mart had sold the first familiar sensation of the day. The paradigm of sober and drunk was one thing they could always count on, surer than East and West. She turned up the radio to blot out the cicada but they rose to the challenge. He sipped at the can and spilled beer down his shirt, it was the hallmark of their return.