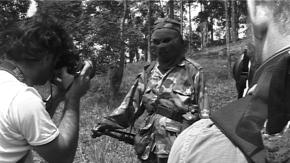 The opening of the SMBA exhibition 'Renzo Martens - Episode III', with a screening of the film Episode III - 'Enjoy Poverty' in the Tuschinski Cinema on November 20, is also the kick-off for the documentary film festival IDFA. Subsequently Episode III will be continuously presented in Bureau Amsterdam, together with several related objects. On Saturday the 22th of November Martens will enter into conversation with Mark Nash, an expert in the field of cinematic strategies in the visual arts. The discussion will be followed by a reception marking the opening of the exhibition.

Episode III - 'Enjoy Poverty' is the second in a series of three films by Martens. Martens made the first part in Chechnya, where he went to seek diversion among the ruins and victims of the war after a disappointing love affair.

For Episode III Martens travelled with his video camera to the Democratic Republic of the Congo, where a humanitarian disaster has been taking place for many years now. Among other things, his film shows how development organisations and Western photographers create a biased media report of that situation. Martens confronts the public with the fact that the Africans themselves do not profit from the images that foreign photographers take of them. On the contrary: like gold and luxury goods, even the images of poverty, the most lucrative export product, are out of the Congelese reach; as they are exclusively exploited by the Western 'poverty industry'. As an answer to this injustice, Martens starts a development project for Congolese photographers; a project that is doomed to failure.


What solutions can Martens provide for the country's problems? Gradually it becomes clear that the artist can only make a purely symbolic contribution, which comes across as hostile and caricatural rather than humane. Consequently Martens holds up a mirror to Western development aid and the Western viewer in particular, in which the moral dilemmas of our time are mercilessly delineated. This does not become a fact, however, without first presenting an equally ruthless and detailed picture of the humanitarian crisis in the Congo.

The way in which Martens makes use of certain conventions from the documentary genre, transgressing them by his constant presence as a cameraman, reporter and activist simultaneously, is crucial to Episode III. In this sense, his work can be understood as a 'performance-documentary'. The discussion between Renzo Martens and Mark Nash preceding the reception at SMBA on Saturday, November 22, will deal with that. Mark Nash is head of the department of Curating Contemporary Art at the Royal College of Art in London. He is a specialist in the use of film (especially documentary film) in contemporary art. Among others, he has been co-curator of Documenta 11 (2002) and film curator of the 2004 Berlin Biennial.

Renzo Martens (b. Sluiskil, 1973) studied at the Catholic University, Nijmegen, and the Vrije University, Brussels. In addition, he attended the Royal Academy for Fine Arts, Ghent, and the Gerrit Rietveld Academy in Amsterdam. A fragment from Episode III is also presently to be seen in the 2008 Brussels Biennial.

SMBA Newsletter nr. 107 (Dutch/English), a special edition with texts by the curator Jelle Bouwhuis, art theoretician Jorinde Seijdel and philosopher Frank Vande Veire is appearing to accompany the exhibition 'Renzo Martens - Episode III'. This Newsletter is available at the exhibition and can also be downloaded at www.smba.nl

November the 21th through January the 4th

The Martens/Nash discussion starts at 3:45 p.m.