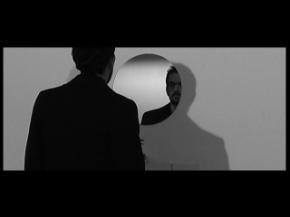 In Daywatch / Nightwatch Pantelis Makkas is showing two recent video installations: ‘Blinds’ and ‘Man about Crowd’. With ‘Blinds’ Makkas rounded off his recent residency at Amsterdam’s De Ateliers art institute. ‘Man about Crowd’ was made last year, commissioned by the SMBA for the video screens at Club 11; it is now to be seen in an exhibition version. 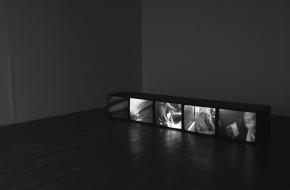 In his work Makkas deals with a theme that to a large extent dominates modern life. Our ever-faster changing environments, the high rate of replacement among the buildings and in the urban setting around us, erodes memory, and thus also our existence. This theme recurs not only in a personal interpretation in Makkas’s visual language, but also in the very manner in which he structures these images and installs his work.

Blinds is constructed of three projections. Although these are synchronised, there is no direct narrative coherence. Each of the three shows individuals who find themselves isolated, alone in a strange space, performing purposeless actions there, or sitting apathetically. On the central screen, from a sort of engine room an older man now and then looks at a monitor on which images from one of the other screens are to be seen; sometimes he turns a large knob as if he has the others under his control, but nothing changes. For this work Makkas studied the movements of people who suffer from memory loss. He then instructed the actors in Blinds to imitate such movements in spaces he had constructed, which the actors had not previously seen. These spaces are anonymous; they are non-places, like a barren hotel room or an empty space with a kitchen unit. This reinforces the vacuity of the images, the futility and apathy; the people are in a state in which the few impressions from outside no longer have any effect.

Man about Crowd is comprised of six different scenes, shown simultaneously. These are images from a camera hidden in the hat of a man who is wandering along streets. He is a spy on reality, manipulating it purely through his presence. As in Blinds, each scene has its own ‘story’, varying from voyeuristic images of passengers in the underground to a repeated visit to a cemetery. “The solitary urban stroller, as a detective, tracking down the transgressions committed in the metropolis and imposing a form of social control over that lawless formation known as the crowd”, says Makkas.

Sometimes the images that Makkas shows us are digitally manipulated to a certain degree. Together with the way in which the three projections in Blinds and the six monitors in Man about Crowd are arranged, this amplifies the disorienting effect of the video installations.

Pantelis Makkas (Greece, b. 1976) studied photography in Athens and Prague, and at Gerrit Rietveld Academy. In 2005/2006 he was resident at De Ateliers in Amsterdam.