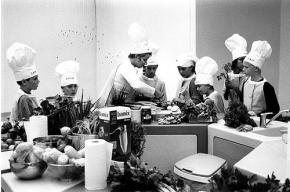 
In 1968 the Danish artist Pale Nielsen built a children's playground in the Moderna Museet in Stockholm. The artist, who was known for the playgrounds he designed for run-down areas of Copenhagen, called his project in the Moderna Museet Model for a Qualitative Society -- a title that leaves little doubt about the socio-political agenda underlying the work. Climbing frames, wooden constructions, swings, water slides, dressing-up boxes and a container full of foam-rubber blocks were placed in the museum's galleries. The children were able to play their favourite LPs on a series of turntables and let their music resound loudly through the museum. 'There is no exhibition. This is only an art show because the children are playing inside the museum. This is only an exhibition for those who are not playing. That is why we are calling it a model', the artist said at the time. (1) The art critic Lars Bang Larsen has recalled Nielsen's project in a number of recent articles written in the light of renewed enthusiasm among artists who are currently seeking a social role for art. (2) Since the mid-nineties there has been a visible revival of art that attempts to tie the aesthetic to the social. Working from an interest in the social act, coupled with the desire to 'animate' the art work, artists have turned their attention to groups or individuals in the general public with whom they want to collaborate to produce the art work. The arrangement of social contacts, of private and public gatherings underlies all this work. Notable examples are the projects of the Amsterdam-based Spanish artist Alicia Framis and the Rotterdam artist Jeanne van Heeswijk. Striking differences from the socially-oriented work of the avant-garde of the 1960s, however, are that their art is far less activist, more personal and poetic in character and not at all anti-institutional. On the contrary, collaboration with institutions is sought in the knowledge that this art cannot exist without an institutional context and the self-reflection of art criticism, even if the art project is situated in the domain of the social. Pragmatism and flexibility are the keys to current artistic practices which bind the social to the aesthetic, the institutional to the non-institutional.

The imagination, creativity and lack of inhibition attributed to children continues to be a rewarding subject for artists who are dedicated to social aesthetics. At the beginning of 1999 the Amsterdam artists Birthe Leemeijer transformed the main space of Bureau Amsterdam into a children's playground. Twenty-thousand toy building-blocks in colours that were different from standard building-blocks were tipped into the gallery space. Leemeijer invited schools and other children to come to play for a morning or an afternoon and before long Bureau Amsterdam had become an alternative playground. The blocks became houses, castles and enormous, stacked piles. Constructions that were then mercilessly destroyed by the next group of visitors in order to be reconstructed into new edifices. The Amsterdam-based artists Tomoko Take (Osaka, 1970) and Chikako Watanabe (Aichi, 1969) too focus on the power of children's imaginations in their Chiko & Toko Project, the title under which they have been organizing workshops with children since 1998. Without wanting to suggest that they are working towards a model for a better society, they expect the Chiko & Toko Project to generate 'small solutions to large problems'. Working from the premise that children are extremely receptive to images, music and stories, they are convinced that anyone who is brought into contact with art as a form of creativity at an early age, and whoever learns the value of shared experience, will reap the benefits of this experience in later life. The infectious enthusiasm with which Take and Watanabe set to work makes one glad to submit to their contemporary 'idealism'. As the musicians Richard Cameron and Karin Ras wrote in response to the Chiko & Toko Project: 'To watch them is to love them.' (4)

The Chiko & Toko Project differs from other comparable artistic practices in the breadth of its approach. Take and Watanabe form their practice in collaboration with fellow artists, photographers, designers and musicians. In turn they are invited to work on these colleagues' productions. The idea behind the Chiko & Toko Project arose when Take and Watanabe were asked to sing easy-listening songs (We Love Dancing! 1998) for the music producers Arling & Cameron. The cartoon figures that Take had created for this music session went on to live lives of their own as Chiko & Toko. These cheerful Japanese cartoon characters became the mascots for the famous Rencontres Trans Musicales music festival in Rennes (1999) and the subject of a video clip broadcast by MTV Latino. The Chiko & Toko cartoon aesthetic also determines the appearance of the environments in which Take and Watanabe hold their workshops. These are configurations of furniture sculptures, diagrammatic displays, music, narratives, video clips and costumes. Total environments in which children are transported to the fantasy land of Chiko & Toko. The highly detailed designs and scenarios employed by Take and Watanabe in the workshops betrays a Japanese longing for perfection. But the subjects of the Chiko & Toko Project are children so, despite strict directing, these gatherings deteriorate into the joyful anarchy that working with children inevitably brings.

The latest project is called Chiko & Toko Cooking! During the summer Chiko & Toko are organizing a series of cooking workshops in Bureau Amsterdam with eight to ten year-olds from Amsterdam. Together with Chiko & Toko and chefs from various Amsterdam restaurants, the children will prepare a five-course meal, which will include a green fruit salad in the shape of a sports car. At the end of the project this unconventional menu will be served to the public in Our Restaurant. The children will indulge their culinary skills in a round, mobile kitchen with, among other unusual features, musical doors. Around the central cooking unit, round wooden trays, decorated in colourful, printed images of the faces of Chiko & Toko's friends, circle like satellites across the floor of the large room. During the final weekends in Our Restaurant these disc-shaped elements will rise up to serve as tables. The groups of children who have worked in the kitchen during the project will be given cooking costumes and the walls of Bureau Amsterdam will be hung with menus, cartoon-like illustrations and photographs representing the adventures of Chiko & Toko and the children. During the cooking sessions Arling & Cameron's Chiko & Toko Cooking! song will be played.

With Chiko & Toko Cooking! Take and Watanabe link into the familiar analogy between art, architecture and gastronomy. After all, the creation of fine food requires the same 'intuition, imagination, enthusiasm and considerable organizational skills' as the making of art or architecture. (3) The children who take part in Chiko & Toko Cooking! will certainly come to understand something of artistic and gastronomic inspiration. Though whether this will make them better people or artists in the future remains to be seen. At least they will have already learnt to cook.