Magnus Monfeldt (b. Avesta, 1973) and Pär Strömberg (b. Örebro, 1972), who have been friends since their childhood days in Sweden, studied together at the Rietveld Academy in Amsterdam. They are part of a small but active Swedish artistic colony in Amsterdam. For Bureau Amsterdam, Monfeldt and Strömberg have made a ‘double solo’ presentation shot through with a narrative vision and a feeling for suspense. In their presentation, landscape serves as a reference point for an installation with paintings (Strömberg) and a spatial installation with video images (Monfeldt). They have called their double solo Ask the Dust after the 1939 novel by cult writer John Fante.

“Mental and physical landscapes, memories, dreams and nightmares are key themes for both of us,” comments Monfeldt, whose film Greetings from the other side won first prize in the Short Story category at the One Minute Festival in Amsterdam in October 2001. The desert landscape of Fuerteventura forms the backdrop for his new video work, We Have to Talk About It (2002), in which the main character reminisces about a childhood spent in a small Swedish village. In Bureau Amsterdam the video is screened in combination with an architectural installation.

For the front room at Bureau Amsterdam, Strömberg designed a painterly environment that takes its cue from the shape of the space. Thirty-seven linked paintings tell a story in which landscape is the locus of an eerie, indefinable occurrence. The artist charts the investigation into this mysterious incident over a period of a year (spring, summer, autumn, winter) using a model made in his studio as his source. Strömberg: “the crime itself is not important for the narrative, more so the methods used to find a solution.”

Published to coincide with the exhibition, the Bureau Amsterdam Newsletter No.66 (€1.15), contains an essay about the artists’ work by Jennifer Higgie, editor of the London-based international art magazine Frieze. 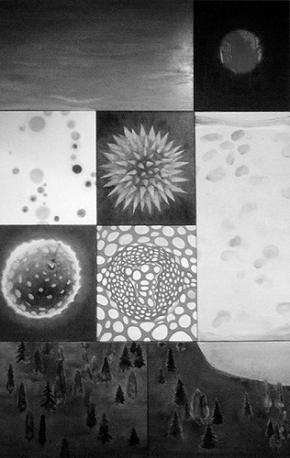 You can't ask dust a thing. Or rather, of course you can, you can ask anything or anyone whatever you like, but you can't always assume you'll get an answer. Dust flies up and away, it drifts off, it doesn't have a mouth; it doesn't speak your language and it doesn't care.

The language that flies through the air makes you think differently about your own language. Trees; mountains; rivers; all contain secrets only some people discover and most are bewildered by. Finding the best language to understand such secrets can take a long time. Sometimes secrets require secret languages.

Sometimes you can walk through a town or a forest and everything you see reminds you of yourself; as if the world exists to mirror your passage through it. But take yourself out of the equation, and a landscape becomes inscrutable.

It is an arrogant thing to do to a place - to employ one language, one that you understand, to describe a place that has nothing to do with you. And what is there to understand, anyway? Surely a landscape is just a place built from explosions that happened lifetimes ago. Of course, once people live and die in a place, build cities, farm the land, dissect the earth, plant forests, dam rivers and pollute the skies a new kind of mystery, a new kind of language is created.

One built, like all good mysteries, from questions we hardly know how to articulate. With the arrogance of gods we rarely let something, some place, simply be. We have to name it, so we can own it; (parents give children names). A place that took thousands of years to evolve can be wiped out in a moment. Perhaps the ghost of its contours and forgotten experiences live on in its new incarnation. Who knows?

You want to work it out, then you have to work it out for yourself; treat everything like evidence; yourself as a detective. Nature is a lousy alibi, it's always there, everywhere, but you can't necessarily trust it to tell the truth in the way that you understand the word. Dust, the air, the wind, trees, the sea - all are connected, at every moment. Their power is invisible. They won't give you any obvious support, but sometimes, they just might happen to be there when you need it. All you tend to see of their presence is the effect they have on things: the way the wind blows and pollen migrates; the way dust settles like silk on warm skin; the way a breeze can cool a hot cheek; the way a tree can shelter you from all manner of things. But nature is elusive: tides slip up to the land imperceptibly; a tree grows as invisibly as hair; a flower is buried and then it blooms.

The only dusty landscapes are hot ones; the kind that encourage deliriums. I can't imagine dust in a cool forest; like giant brooms the trees would sweep it away. Dust in a city can choke you. In the desert the dust tastes clean. What would you ask dust, if you could? It's a great traveller. You could ask it to tell you stories about the things it had seen. Or you might ask its advice and gain comfort from its silence; a silence that suggests anything is possible. If you were of a pessimistic frame of mind, you might ask it something with the fore-knowledge that you won't get an answer. The silence might please you; it might confirm the innate indifference of the world; it might confirm your worst fears about your isolation; of the fact that learning anything takes a lot of work, and even more imagination. Strangely, however, such knowledge can be reassuring.

Dust, like so much we know and understand, is created from the residue of things; hair, skin, clothes, rocks, trees, animals, cars; things once familiar that you can no longer identify, that in the act of transformation have become something else. Dust to dust; people seemingly come from nowhere, touch you and then they leave or die and so, in a sense, return to nothingness. But this time, their nothingness has a shape.

Outside, their absence - the not-knowing where they have gone - can make you howl, but your voice gets lost in the atmosphere and so you become silent but your heart aches with the knowledge that something is lost. Dead stars hover beautifully in the black sky; what they once knew was also lost long ago. Memories are like dust; something created when things dissolve but won't quite disappear. The air, a body, a landscape; one made from the other; my body, your landscape; each feeds off the other. My skin, full of the air and mainly water, all of which will eventually evaporate; clean white bones litter a desert like sentences.

It can be comforting if you think of annihilation in terms of air and dust; of being blown back into the world; of settling only where the wind dictates. Of drifting above the sea, unknowing.

Writing or thinking about the art that someone else makes turns you into a kind of detective: you look for clues: you try and understand motivations; you try not to get too distracted by anything that isn't there but you also try to understand the context that created what the artist has made. You have to believe that the surface of things can contain meaning; you also have to believe that objects can be magical; that in the blink of an eye or in the play of an imagination things can be transformed into something that may not obviously have any bearing on the original object. But you also have to try and not assume too much; what you read in these objects is fluid; in art as in nature, an idea may stop for a while inside you but ultimately nothing is fixed; what you understand always depends on where you have come from and what you are looking for.

Archaeologists look for clues in the landscape and become writers. They write up the story of the past using objects as their alphabet. But do archaeologists really know what they are looking for until they have found it? Does anyone?

Certain landscapes encourage a certain intimacy. They live as intensely in your imagination as they do in time and space. You can dream of them and see them and smell them clearly even if they do not exist for anyone else. You can live your life hoping you'll find a place like this and when you do, you could weep for joy.

As you move through a landscape you connect with, it feels accommodating, even in the dark. There is no rational explanation for this; it has nothing to do with looks; sometimes the prettier the landscape the more unfriendly it can be. I had a friend who couldn't bear green soft hills; they made him feel claustrophobic. He liked remote lakes and deserts; he liked to see where he was going. A woman I know preferred forests and valleys more than anything; she liked the feeling of being held close as she slept. I find sitting on a beach and looking out to sea the most reassuring place in the world. I don't know why. It's something to do with emptiness, even though an ocean isn't empty.

Perhaps all of this has to do with spirits; the accumulation of energy from the animals and people who have moved through this place before you. Perhaps it has to do with the memories that rocks and dirt contain; perhaps the wind has blow in from somewhere abundant and happy. Perhaps hallucinations of people and animals you have never met stain the earth and seep into your consciousness. You wonder what such a place can offer you. If you connect with it, you know one thing; you are comforted and you don't really know why.

You could be murdered in a field or a forest or a desert and nothing would blink. The natural world is essentially an impassive place. This can feel horrifying; the absolute indifference of nature to its inhabitants. But it can also be a source of comfort; indifference as a kind of benign acceptance; a place that doesn't judge you, no matter what you do.