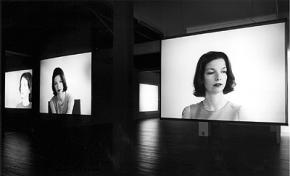 The study of how the human mind functions is going through an unparalleled revival thanks to the advancements in cognitive sciences. The rediscovery of the mind is currently the focus of exciting research in philosophy, psychology and linguistics. Most of the questions raised by the work of Manon de Boer fall under this vast theoretical field, which I could not possibly venture to present here. I shall instead limit myself to showing how, in my view, the artistic pursuit of Manon de Boer gives plastic form to some areas of this field of research.

For The Monologues (1997), Manon de Boer filmed - for three consecutive days - three women who were asked to soliloquise on a topic they had chosen themselves for ten minutes each time. A little while later, they were filmed listening to their own monologues. I was one of them. For Image-Memory-Story (1997) and Switch (1998) I had to speak into the microphone of Manon de Boer once again. And I had the same feeling with each take: these recordings were like mild torture sessions I started dreading as the time drew near. But I always enjoyed reading my recorded text immensely. Why such apprehension, why such pleasure? These feelings are explained in part by the strange situation created by the artist: commonplace at first glance; not at all so upon closer scrutiny. For every discourse has its intention. But what is the intention of these monologues? It is not educational, therapeutic or rhetorical, because there was no audience to convince; nor even seductive, as in conversation. It actually boils down to thinking out loud. And who is not surprised by uttering a sentence out loud when thinking? Yet thinking out loud in toto is something completely different. Because a third person must then be present. As Roland Barthes has put it: "My body refuses to speak out loud... if there is no one there to listen. If I am not certain that another body is listening to me, my voice is paralysed; it cannot possibly come out. If I notice that someone is not listening to me in a conversation, I stop talking (...). To speak alone into a tape recorder, when every voice is made to meet the other, seems unbearably frustrating to me: my voice is literally cut off (castrated); there is nothing doing: I cannot be the listener of my own voice (...)"

In short, thinking out loud is speaking to oneself, but with someone else present (only people who talk to themselves can do without this presence). Not only does the artist make this discourse - not intended for her - possible, but she manages to leave her mark on it by merely being there. For what emerges from these monologues is undoubtedly, albeit in part, due to the personality of the “sound engineer.” These snippets of intimacy could have been uttered and set forth in part because of the relation the artist established with her characters. Moreover, the choice of these fragments, the tone and attitude adopted by the “speakers,” undoubtedly correspond to certain implicit expectations on the artist's part which underlie all human relations. In this respect, all these works - Laurien, March 1996 etc., Annemiek, April 1998 etc., The Monologues 1997, L.A.- Stories, December 1997, Switch 1998 - are concurrently vivid self- portraits of the artist, insofar as her presence leaves its mark on each of these works and they in turn on each other.

These recording sessions take a close look at the process of remembrance. They reflect the vacillations and reworking efforts to reconstruct recollection from... from what? What "material" does one use to recount a remembrance? Let us proceed by analogy with the image. Imagine that you want to draw a bicycle. You can manage quite well without having an actual bicycle under your nose. You will proceed in fact from your "inner drawing" the disegno interno (as Federico Zuccaro called it in 1607). This disegno interno is the inner congener of the percepts of the physical object. It does not correspond to any external image. For example, the rare cases of photographic memory notwithstanding, the imprint your neighbour's bicycle has left on your memory is not a perfect replica of that bicycle. It is rather an incomplete representation, consisting undoubtedly of the salient traits that composed your perception of that bicycle. This explains why we sometimes have the impression that we can recognize a friend's face in a stranger. The problem is further complicated when recollecting a situation such as that found in the works of Manon de Boer, though it is essentially the same. These monologues are an external mirror of incomplete inner representations the characters have of recollected situations. If these memories were put in writing, they would no longer reflect the characteristic incompleteness of these mental representations. When recounting one of their remembrances, the characters present a particular experience or specific object as a prototype. In the monologue, the individual object is transformed into a type, undoubtedly somewhat like the aforementioned disegno interno of the bicycle. This generalisation is brought about chiefly by the poverty of the description.

The links between the constituent elements of the monologues are loose and insignificant. The recollected images are dispersed rather than co-ordinated. The impression of incompleteness is further enhanced by the incompleteness of the recollected images. Now Gombrich has stressed with great precision the importance of the image in the psychological process of interpreting a work of art. Projection replaces perception here. An unfinished painting can fire the spectator's imagination and enable him or her to project non- existent forms. Gombrich points out that two conditions are needed to trigger the projection mechanism. The spectator must be familiar with the subject and must have a screen: a surface on which s/he can project the expected image. This in a way is what happens to the spectator of the pensive, profoundly silent faces of Manon de Boer. Just as the artist-spectator has left her mark on the portrait of her character, the spectator of these virtually motionless faces is invited to leave an imprint of his or her personal history on these screens. The projection of his or her own memories on these screenfaces thus completes the unfinished images of the stories of the characters (the plain background, the stillness, the everyday nature and ordinary aspect of the faces foster the analogy with the screen). The spectator can thus turn these faces into his or her own self-portrait. Above all, if the spectator has taken the time to delve deep into the construct of his or her own memory, the work of Manon de Boer beckons the spectator to create his or her own mental rooms from the material constructed during the perception of the work, and to become concurrently aware of the process that brings such memories to life.

The silence of these ostensibly pensive faces is most telling. We not only understand that these faces listen (The Monologues) or look (Laurien, April 1996, Robert 1998, Annemiek 1998), but something enables us also to guess whether what is being looked at or listened to is physically present or reproduced by some medium. Above all, we can at times guess whether the filmed character is looking at or listening to him- or herself. In The Monologues and in Robert 1998 and Annemiek 1998, this mirror relation is doubled as the characters, are aware of the camera watching them watch themselves, as in mirror scenes in films. They are aware that they are being watched in a state of self- consciousness. These signs of a mirror relation between a face and the object perceived is a new invitation to self-portraiture and self-consciousness for the spectator. Practically no-one is ever seen talking in the videos of Manon de Boer. One of the rare cases where a character does talk, in 2 L.A. Stories-December 1997, the spectator sees him merely thinking about what he is going to say, and when the character does speak, the screen goes blank. The face thus becomes a space for guessing an emergent thought, while the blank image turns into the screen on which the mental images derived by the spectator from the words can be projected. Similarly, the nature of the activities filmed in the 1996 videos is never explicit, only suggested. The spectator can only guess the abstract type of activities carried out; the particular activity as such remains a mystery. For example, many spectators of Robert 1996 saw someone in the process of co-ordinating, of arranging something, whereas the character was actually playing the guitar. In other words, they distilled the general (co-ordination) from the particular (playing the guitar).

Like every face, every voice is unique. Our remembrance of the voice and the face of people is inextricably bound up with them. To be convinced, you need only try to imagine someone having the voice of someone else or the face of a friend moving like that of somebody else - rather impossible mental exercises. Our representation of this voice is more abstract, however. For example, when we read someone we know, an incomplete and abstract representation of the author's voice is superposed on the text. What is this remembrance composed of? Undoubtedly of typical elements of that person's prosody, the structural features we use to imitate someone's voice. Switch (soundwork) (1998) reflects this representation in even more abstract terms, because it is not even supported by words. For Switch Manon de Boer asked a (woman) singer to work from monologues of characters which she could not understand because she did not know their languages. She relied on the specific prosody of the character and on the music of their language to compose vocal pieces without words. The language of origin of each piece is easy to identify with a little concentration, because the attitudes generally projected on the languages are so clearly "translated" in them. The character's personality can also be detected. One of them said that in listening to himself, he had the same strange impression as when he looked at his writing in a mirror. Likewise, the spectator of de Boer's work has the same impression we get when we see ourselves unexpectedly in a mirror as we walk down the street. The pleasure of recognition and of surprise.

(Translated from the French by Prose Unlimited)