Please note that the sound component of the monument might sometimes be out of order. To be sure, please bring this sound file with you on your mp3 player:

On Saturday afternoon, 27 June, the SMBA presents the 'Krakersmonument' (Squatter's Memorial) by Jeremiah Day. The presentation will take place around 5:30 p.m., at the end of the Stromboliweg, in the western harbours of Amsterdam. As an introduction, prior to the presentation a public conversation between Jeremiah Day and the former artist Raivo Puusemp will take place in Stedelijk Museum Bureau Amsterdam, beginning at 4:00 p.m. After this a shuttle bus will depart for the Stromboliweg. Frank van Kreuningen, chairman of the Amsterdam Spinoza Circle, will perform the opening ceremony.

As an American artist living and working in Amsterdam, Day's interest in squatting was awakened by a personal experience in July, 2006. Yellow banners with the text 'made possible in part by the squatter movement' showed up on the façades of former squatter bastions like Paradiso in Amsterdam and Tivoli in Utrecht. In America squatting has a highly subversive image, but these banners alerted Day whose work focuses principally on dealing with historical moments to the fact that squatting was not only a political affair, but had also been a stimulus for the creation of important cultural institutions.

The Krakersmonument takes the form of a 'story-telling box', such as can still sometimes be found in older American amusement parks: a sort of speaker on a post which, when you press a button, narrates a story or tells a fairy tale. The story fits with what the listener sees before him, in this case the view out over the Amsterdam harbour. And here it is no fairy tale, but it is also certainly not a history lesson or a political discourse. In a playful way the Krakersmonument combines the official language of monuments and memorials with the creative capacity of fiction and art, so as to function as a way of freely reflecting on this specifically Dutch history.

The basis for the conversation between Jeremiah Day and Raivo Puusemp is an art project of the latter. In 1975 he announced his candidacy for mayor of the town of Rosendale, in the state of New York. After he was actually elected, within two years he saw to the abolition of that community, with the permission of its residents. 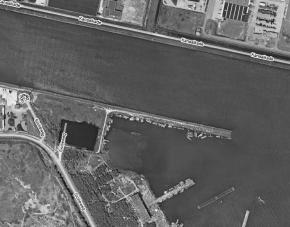 Allan Kaprow later frequently cited the project as a textbook example, in turn also making it a source of inspiration for Day. The conversation between Puusemp and Day will be moderated by Jelle Bouwhuis, curator at Stedelijk Museum Bureau Amsterdam.

There are several options to get to the 'Krakersmonument'. The Stromboliweg is yet not added on Google Maps and also unknown at any Navigationsystem. So click on the map below for the exact spot.

- By car is the easiest option to get there

- By bike: you can rent a bike at Sloterdijk Station at the Rijwielshop (costs E 3,20 for a half day, open from 07.00h till 19.00h) There are Krakersmonument-flyers with a map on it at the shop. Mind that the bike ride will take about 25 minutes

- By shuttle bus: on July 25th and September 25th will depart a shuttlebus from SMBA, Rozenstraat 59, call for reservation

A map of the location on Google Maps is available here

The Krakersmonument can be seen until at least 1 October on the Stromboliweg. The work will also be part of the group exhibition One's History is Another's Misery in Stedelijk Museum Bureau Amsterdam, from 26 July through 6 September.

manifestation My Name Spinoza. It is made possible part by the Amsterdam Fund for the Art and the Foundation Art and Public Space.

The Manifestation My Name Spinoza is an initiative of Amsterdam Spinoza Circle, developed by SKOR (Foundation Art and Public Space) and in collaboration with Foundation Spinoza Centrum Amsterdam.