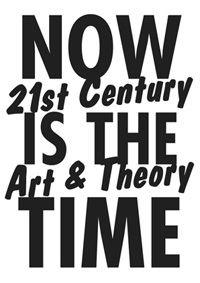 Now is the Time: Art & Theory in the 21st Century


The attack on the World Trade Center spelled closure for the 20th Century. There was no going back; the world had been catapulted into a new millennium. But what developments have taken place in the visual arts since this violent start? And how has art theory interpreted and contextualised these developments?

The programme of Now is the Time consists of a series of lectures and debates dedicated to urgent themes that together describe the total scope and complexity of the arena in which the arts of the new millennium are situated. Renowned speakers such as W.J.T. Mitchell, Boris Groys, Terry Eagleton, Kaja Silverman, Julian Stallabrass, Hou Hanru, Ruth Noack and Rick Poynor, will consider topical questions such as the impact of 9/11, the role of advancing globalisation on the art world and the polarizing effect of religion. These themes, defined by social and political developments, are juxtaposed with art related subjects like the search for a new canon, the return of Romanticism, the ideals of design and the status of the artwork in the post-medium condition.

For the full programme, more information on the topics and speakers and to make reservations, please visit the website: www.nowisthetime.nl

With Kaja Silverman (VS) and Laura U. Marks (CAN)

With Robert Nelson (VS) and Ruth Noack (A)

Now is the Time takes place in the Auditorium of the University of Amsterdam (Oude Lutherse Kerk, Spui).

The entrance fee is ? 7,50 per evening, a passe-partout for the complete series is ? 40. There is also a medium passe-partout available for ? 25 which gives entrance to four lectures of your choice.

Special rates apply to students, UvA alumni and Friends of the Stedelijk Museum.

For reservations please go to: www.nowisthetime.nl Tickets and passe-partouts can also be purchased at W139 en SMBA.

All Now is the Time lectures are in English.

Now is the Time: Art & Theory in the 21st Century is compiled by: