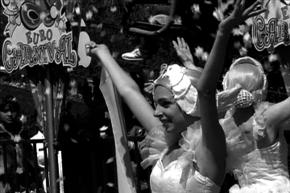 The film program BEYOND PARADISE presents a selection of documentary, short films and videos addressing various perspectives on tourism in diverse geographical and political contexts. In the framework of the exhibition Beyond Paradise at Stedelijk Museum Bureau Amsterdam, to be seen until Sunday 7 September. 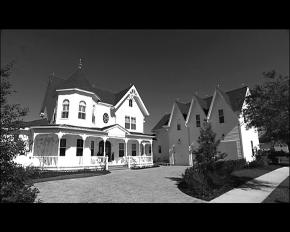 19.30: Introduction by the curators

The film shows six couples in search of utopia. They are the residents of Celebration; the latest version of the American Dream, built in Florida by Walt Disney. Walt Disney always said that dreams can come true. Is Celebration a dream come true in a world gone wrong? (2005, 55', DV). The filmmakers will be present.

A weekday afternoon on the Everland, one of the largest amusement parks in South Korea. Its annual EuroFestival is the controversial epitome of clichés of Western and non-Western representations, and many Koreans absorb them as a taken-for-granted visual experience. (2006, 03', DV)

An aerial study of Las Vegas and the surrounding desert landscape, where the artist abstains from tourist clichés by accompanying the images with muffled sounds of explosions, and thus underscores the paradox of this entertainment capital, imperturbable in the face of the energy crisis and terrorist attacks. (2005, 13', 35mm on DVD).

A poetic document exposing the stereotypical thinking that underlies many social and political level of one’s mind. Aljafari exploits the stories and rumours by residents around the recently abandoned Iraqi Airways office in a Genovese neighborhood. (2003, 26', 35mm on DVD)

Trinity in New Mexico, where the first atomic explosion took place in July 1945, is transformed from secret nuclear test site to a tourist attraction. Twice a year, this silent area is open to the public, and becomes an event. There is nothing to see, apart from the totally normal activities of these special visitors, forming a contrast to the experience of the immense emptiness of the landscape.

The fuzzy image, shot from far away, showing bored tourists in a large swimming pool of a hotel located in an Arab country. On the windowpanes of a travel agency in Paris Fatmi found this sentence written in large letters “La terre moins chère “ ("A less expensive earth"). His film addresses the social and economic borders of the contemporary tourism. (2004, 10', DV)

'How much do you need to pay to experience this beautiful landscape printed on the bank note?' Visiting the Li River in China, Lin confronts her own experience with a collection of Youtube tourist videos. The endless consumption of this landscape unfolds the social impact of tourism in the region. (2007, 05', DVD). The artist will be present.

With the support of Amsterdams Fonds voor de Kunst.