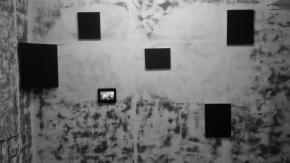 As the final chapter of the series of exhibitions of Global Collaborations, ‘Kamarado’ has landed in India. In Mumbai a substantial part of it is to be seen at Clark House Initiative where it forms part of the larger framework of ephemeral and unexpected situations and micro-events, 'Liberty Taken by Surprise'.

Concurrently, a special booth at the India Art Fair in New Delhi features the presentation ‘Yawnghwe Office in Exile with Adrian Melis’, curated by SMBA on invitation by Clark House Initiative as an outcome of ‘Kamarado’. The presentation consists of a series of black paintings inciting both Western modernism and the traumatic history of Birma, its civil wars and the repression of the Shan people and its leadership, from which the Amsterdam based artist Sawangwongse Yawnghwe is a direct descendent. Adrian Melis presents his video work 'The ‘New Man’ and my Father'. In it, Melis poses annoying questions about the communist revolution in his home country, Cuba, of which his father was an avid supporter. He undergoes the interrogation in silence yet his facial gestures speak volumes. The presentation is accompanied by a short introduction by co-curator Jelle Bouwhuis.

The India Art Fair in New Delhi is the major art fair at the subcontinent and a shining symbol of its vivid art world, with an international appeal and of global influence. The India Art Fair opens January 28th. On the closing day January 31st Sawangwongse Yawnghwe will give a presentation at noon.

'Kamarado' in Mumbai and New Delhi is supported by the Canada Council for the Arts and the Institut of Auslandbeziehungen, Germany.