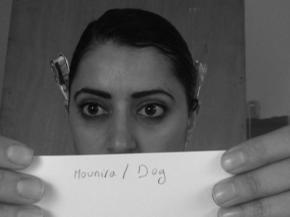 And drawings by Rene' Daniels

Official opening and book presentation on Saturday, 25 June, at 4:00 p.m.

Stedelijk Museum Bureau Amsterdam proudly presents the first large-scale solo exhibition by Mounira Al Solh in The Netherlands. Al Solh's work can be described as an inner conflict with social environments which impose national, cultural and religious identity. In that sense it is a reflection on the social and religious tensions in the country of her birth, Lebanon, which has undergone several civil wars and still occupies a sensitive position in the present eruptions in the Middle East. But here in The Netherlands one's origins and culture are becoming an increasingly important aspect in social intercourse too. Al Solh approaches this fact with a mixture of autobiographical elements and humour – because how else can one approach censorship, repression, schizophrenia and the discordant culture in which everyone has a role?


The exhibition comprises various video works, including a Double Burger and Two Metamorphoses… and The Mute Tongue. The first can be interpreted as Al Solh's wrestling with her life as a commuter artist, shuttling between Beirut and Amsterdam. In the second, 19 Arab proverbs are acted out in short films, and their comic potential maximized. A considerable part of the exhibition is devoted to a survey of the work of the figure Bassam Ramlawi. Ramlawi is a juice seller in Beirut who has studied art in The Netherlands, and since done portraits of people from around his shop in Beirut. He also reflects on life in the Lebanese capital through the drawings that he makes when he has to wait somewhere. A documentary shows that he is familiar with the oeuvre of Cindy Sherman and with a famous portraitist of the inter-war period, the German artist Otto Dix, but above all he admires the work of the Dutch artist René Daniëls. The stylistic ambiguities in Daniëls’ drawings and paintings form a parallel with the way in which Ramlawi and Al Solh go through life: Al Solh as an artist in two worlds, Ramlawi as an artist on the one side and a merchant on the other, and whose existence as such is to be credited to many ambiguities. Crudely put, the exhibition in SMBA is the result of this.

A number of the works by Ramlawi in this exhibition were recently displayed at the Sfeir-Semler Gallery in Beirut. Especially for this occasion in Amsterdam, they have now been placed in their art historical context, with drawings by René Daniëls from the collection of the Paul Andriesse Gallery.

For the SMBA Newsletter Elizabeth Kassab wrote a Project ‘1975’ essay. Her contribution reflects on the role of the intellectual in the Arab world in the decades after decolonization, and of course in the context of the ‘Arab Spring’. The Amsterdam writer Merel Cladder contributed an introduction on Al Solh's work – and thus also on Ramlawi’s oeuvre.

Mounira Al Solh (Beirut, 1978) studied at the Lebanese University in Beirut (1997-2001 ) and the Gerrit Rietveld Academie (2003-2006), and was resident at the Rijksakademie van beeldende kunsten in Amsterdam (2007-2008). Her work has been represented in the Lebanese pavilion at the Venice Biënnale in 2007, in Manifesta 8 in Murcia, 2010, at the presentation of the Volkskrant Visual Art Prize in the Stedelijk Museum Schiedam (2010), and in the extensive survey ‘The Future of Tradition – The Tradition of Future’ in Haus Der Kunst, Munich, 2010.

René Daniëls (Eindhoven, 1950) lives and works in Eindhoven. Among the exhibitions where he has been represented was Documenta 7 in Kassel, 1982. The retrospective exhibition ‘René Daniëls - The most contemporary picture show’ toured in 1998/1999, with stops including the Van Abbe Museum, Eindhoven, Kunstmuseum Wolfsburg, Kunsthalle Basel and Stedelijk Museum Amsterdam.

Tony Chakar (Beirut, 1968) among other things participated in the touring exhibition ‘Contemporary Arab Representations’ (2001-2002); showed ‘Beirut, the Impossible Portrait’, at the Venice Biennial (2003) and worked together with Rabih Mroué and Tiago Rodrigues on the touring performance Yesterday's Man (2007). He teaches History of Art and History of Architecture at the Académie Libanaise des Beaux Arts and collaborates regularly with the Dutch Art Institute.