I guess it all started with X. I had seen X's work for the first time three years ago, tucked back in a corner grey-carpeted stand, it as unassuming as the works themselves. And though they were -indeed- all rather small and all rather meek, even stubborn, they seemed to float and lean and be glued with a fuck-off-kind of attitude. I remember I walked through the booth passed a floating belt and a leaning stick and accordion-pleated record sleeves and that I was humming a song I never particularly liked: ‘We're on the road to nowhere'.

I was also thinking something I had then thought was completely unrelated to my art-viewing -and perhaps it was-, but for argument's sake, let's assume my side-tracked mind is allowed to take on grander intellectual proportions now: I was thinking how strange it was to be called as I am: xxxxxx. A simple word. MY word. I am that word. It was the kind of experience I think everyone has had at least once in their life but one which usually happens when one looks into a mirror at oneself and all of a sudden thinks -or realises- hey: I am that. That's how I look to the world. I got that same feeling but from the word only. Word became, for a moment, just as abstract, or just as over-tangible, or just as over-personalized as a reflected image. 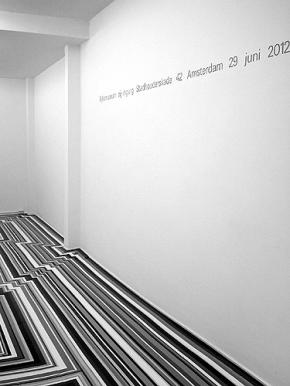 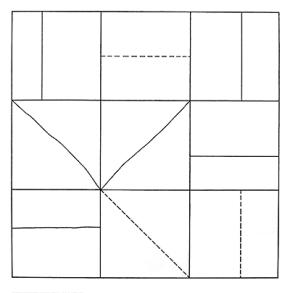 It was a little late in life to be realising this (Lacan puts the mirror stage somewhere around 2, I think) but it happened when it happened and sometimes, when I'm lucky, I can feel that happy confusion again. I can sometimes remember -remember, not experience- my identity hyper-awareness attack when I am (happily) confronted with contingency or incompletion [1].

And so this brings us back to the confrontation with X's works and my initial reaction to them; this is the connection I can now successfully muster: there, in front of those works for the first time, I was being confronted with something new and uncategorized and destabilizing and my mind was jumping, jumping in and out of rational frameworks in an attempt to order.

If much of conceptual art in the 60's and 70's was attempting to get as far away from the object -the object as end result- as possible then Lippard and Chandler were dead right in saying that the (new) reception of art was not merely about immaculate perception and ensuing experience but about seeing and actually thinking about what you see. Not necessarily to create from ‘nought' but nought to create [3].

From nothing. To nothing.

It wasn't that X was attempting to dissolve the object or that his aim can be neatly understood within a (traditional) conceptual framework, but rather that there are some aspects of this work (democratisation, rhythm, repetition, exposing of a root...) that, strangely enough through the affirmation of the object, somehow manage to cite conceptual tendencies.

This though is a new kind of conceptualism, one I termed -probably quite awkwardly- "conceptual outsiderism".

The word "outsiderism" -as I write this, underlined in red- doesn't exist. And please note that I am not referring to the introverted communicative skills of the mentally challenged. I mean to say that in a way the five artists, the five Xs, are all outsiders to a certain extent: they go their own way, have created their own handwriting, tell their own specific stories, stubbornly, humbly, and, most importantly: contingently and incompletely.

Perception alters the mind and may change further concepts [4]

Back to the word.

By showing the basics, by going -though not back- to an origin, X disrupts the established, he disrupts accepted concepts or conventions (in a poststructuralist kind of way). And in so doing places himself outside the conventional. Similar to my sudden confusion at the sight of my own ‘label' (the ‘concept' under which I am known) X poses an, at first glance, understandable, digested, accepted form (or, in the case of the word: poses the accepted name/label) but alters it in such a way as to make the recognizable foreign, thereby -simply put- messing with the viewer's mind.

we're on the road to nowhere

…‘Nothing' not in terms of what is ‘left over' but in terms of primary, in terms of that which instigates: we wind up -plainly- with raw material. These Xs show us this: potential. They give the viewer the tools to think with and therefore instigate thought (this is use-art, Dorothy). They afford him a ‘method', a new approach with which to re-look at reality and are therefore not producers of images or of products or of the word, they are producers of the elementary particles which lead eventually to new practices [5]. New images, new products, new words.

[3]: Jose Ortega y Gasset said in 1956: the task it (new art) sets itself is enourmous: it wants to create from nought