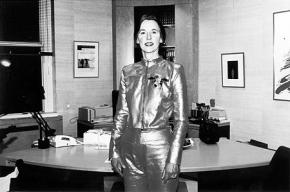 Following a highly successful start in New York in March, Cees Krijnen's Woman in Divorce Battle on Tour 2000 has come to Amsterdam. Stedelijk Bureau Amsterdam has been selected as the first European venue. The new Kunstmuseum Luzern and the Fondazione Pistoletto in Biella will be next, followed later in the year by Tokyo, London and Milan.


The woman at the centre of the show is Greta Blok, the artist's mother. Krijnen asked her to perform the role of Woman in Divorce Battle. It has become apparent that there could be no better ambassador for female divorcees. She is so convincingly relaxed in public even the barrage of the cameras leaves her unruffled. Men are attracted to her and she possesses an aristocratic charm which fits perfectly with her new image.

Lately Krijnen's work has been the focus of much media attention, as has the family history underlying it. Fifteen years ago Krijnen's parents divorced at his mother's behest. The father couldn't bear it. His felt deeply insulted and grasped the issue of the dividing of their property to make his wife's life a misery. There were no limits to what he would do: intimidation, tormenting her into the courtroom, stalking her through the legal system. For fifteen years Greta Blok has been the target of her ex-husband's frustrations.

Cees Krijnen, an only child, watched his mother waste away while her solicitor's bills grew and grew. Then Krijnen himself was hauled in front of the judge. This was the final straw. From that moment on he has done everything in his power to bring an end to this exhausting issue and to make his complaints about the legal system heard. Krijnen: 'In the Dutch constitutional state everything would appear to be well organized. But instead of the victims it is the perpetrators who receive protection. My father still has a hold over my life and that of my mother. The eternal struggle between man and woman is part of life, but not this.' Krijnen decided to draw something positive from all the misery using his sense of humour, which he shares with his mother.

Financing My Parents' Divorce was the title he gave his project for the 1999 Prix de Rome for Theatre and Fine Art. On entering his studio the Prix de Rome jury encountered Krijnen's mother drawing all the things that had been taken from her onto a plan of the house. To ease the pain of the divorce disputes the PortablePowderPuffPainkillerSystem blew a cloud of powdered aspirin through the room. Krijnen, who had gathered all kinds of personal information about the jury, introduced the male members to his mother as if they were potential spouses. He won first prize. The prize money was divided between his mother's solicitor, long overdue repairs to his mother's house, and the first stage in the next project, Woman in Divorce Battle on Tour 2000 which was presented at the trendy New York gallery Up&Co.

At Stedelijk Museum Bureau Amsterdam, Krijnen will present the New York stage of the tour in video and photographs shot by Anja Ligtenberg at the press conference and opening. The scene will be further set by a collection of glossies containing reports on the launch of Krijnen's tour in New York, a family portrait of the father's side of the family (a photo taken when Cees was nine) now entitled Self Portrait, and the presence of both mother and son. In this piece Krijnen combines performance and documentation with the presentation of new works on paper: highly detailed Renovation/Reconstruction drawings developed with the engineer Jerry van der Eem show the piping configuration of the new central heating system, which was paid for with Krijnen's Prix de Rome prize money. Photographs picture the central-heating engineers at work. The new heating system radiates the son's love and literally surrounds the mother with warmth. By eliminating everything reminiscent of the father from the house (the old heating system was the last major investment Krijnen's parents made together), and by caring for his mother and giving her a role in life, he generates a new happiness. At the same time the symbiosis between mother and son is becoming stronger. Can Krijnen now leave his mother well cared for and go on with his own life? 'We've just become so close. It won't stop. We travel the world together. The collaboration works so well that we have become a duo like Gilbert and George or Viktor & Rolf. The generation gap makes it even better. We make decisions together. Should we do that in an art context or should we remove it?'

It takes some courage to put yourself and your mother in the limelight against the backdrop of the least heroic tragedy possible. It is daring to put highly stylized portrait photographs in a solo exhibition and to combine computer drawings with documentary material referring to earlier success. Krijnen shows that the presumed authenticity lies not in the representational images but in what happens in the mise en scène, including its central translation of the 'reality sentiment'. This moment, here and now, cannot exist without a history. And it cannot be composed without all the props that serve to cast a different light on the course of events. Every stop on the tour will summarize the previous one and will provide the impetus for new developments. By linking the different stages of the tour in the presentations, Krijnen reflects and comments on the history of the project as well as steering it forward. He is not concerned with producing a static final product. 'What it mobilizes, or has mobilized, is art. An exhibition often presents a kind of end. This has a sequel.' Krijnen extends the structure underlying this family drama into its representation. In so doing he regularly works with people from different disciplines. The combination of people from inside and outside the art world, of 'high' and 'low' cultures and the combination of the temporal and the object all contribute to the final form and content of the work.

Krijnen is constantly alert to things that occur in the project and is genuinely amazed by the reactions and situations it has generated. His performances have already been featured in many magazines, TV shows and newspapers. He expects the explosion in the glossies to come in July in the Spanish and Japanese press. Take for instance the response at the press conference that launched Woman in Divorce Battle on Tour 2000 in New York. The press only had eyes for the divorced lady of the Netherlands, who was clad in a gold leather battle dress. Almost no attention was paid to the artist. The Vogue visagiste, stylist and photographer were not identified as part of the performance. Neither was the outfit, which was designed and sponsored by the Belgian designer Dirk Schönberger. 'This is drawing attention to a harrowing, global issue', remarked one. 'Look, she's going to the bathroom; that's part of the performance', whispered another.

The emancipatory metamorphosis of a pining, passive victim into a combative mediagenic woman was celebrated all round. 'I have shown that status can be attained for the otherwise stigmatized "divorced woman"', says Krijnen.

Krijnen manages, hilariously, to invert the connotations and context-specific meanings that slip into the project in sophisticated and unpredictable moves. With a single witticism Krijnen exposes ideas one would otherwise assume to be harmless, or wouldn't notice at all. In one earlier piece he had a Delftware service decorated with the word 'cancer' (1995), thus furnishing the cliché souvenir with a silenced but, in his own words, 'beautifully robust' word. He also transformed one of the court cases into a fashion shoot (1999) with his mother as the model; the judicial apparatus thus became a film set and farce. Krijnen: 'I definitely have no respect for authority.' His obsession with cosmetics has been manifested in his own range CeesKrijnenCosmetics, which strikingly includes a Nosehairconditioner (1999).

Cees Krijnen is a master at mixing art and life, and mixing socially engaged statements with the purest of 'ego-docu-drama'. Personal involvement always provides him with his point of departure. In the work it is not fact and fiction that are interwoven so much as various levels of reality that are created. 'I don't keep anything from the audience, I just give them what it is. It has a lot of integrity', says Krijnen sincerely.

Krijnen's attitude sometimes leads him to be compared with artists who work between fine art and theatre, who use theatrical means to create temporal situations in direct contact with an audience. Others compare him with artists who explore beyond the art context; who change their discipline and collaborative relationship for each project. These are often superficial references when you consider that most of the exponents are too hung up on the making of art and suggesting implications relevant to the broadening of the spectrum or, in other words, the art public. Interesting and necessary though this may be, it is still safe and coded. Krijnen's reflections on life, on the other hand, lend real content to the realization of ideal and practical motives - both within art and outside it. With humour and drama Krijnen transforms real situations into staged events and vice versa. An animated, personal engagement, which operates both as theatre and as social reality, generated by a love of life and art.