In his catalogue essay for the 1999 Royal Subsidy for Painting, the critic Camiel van Winkel called painting an anachronism, 'it is not of this time'. (1) In a recent discussion held in Amsterdam about the work of Ronald Ophuis, the philosopher Henk Oosterling expressed himself in similar words. (2) Nonetheless, both remarked that despite painting's supposedly marginal position, artists still stubbornly continue to paint. According to van Winkel and Oosterling, painting no longer has the undisputed reach it once had and faster, more effective (digital) media have robbed it of its social function. Yet still, they note, all kinds of attempts are made to legitimize it as an artistic practice. 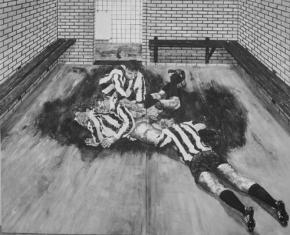 Ronald Ophuis is one of the artists who, at the end of the twentieth century, has chosen to work in this introverted medium. Dog-gedly he persists in the search for a position which will endow his painting with a greater significance. Ophuis achieves this by placing the relation of painting to reality at the forefront of his practice. Besides a series of smaller paintings, in recent years Ophuis has painted five large canvases depicting a range of violent subject matter. Although these been exhibited in various places, at Stedelijk Bureau Amsterdam, all the 'five paintings about violence' will be exhibited together for the first time. These works, which were made between 1995 and 1997, present acts of physical, sexual and psychological violence. In these bleak canvases, in which a process of scraping away and building up paint leaves underlying layers filtering through the upper surface, Ophuis usually presents the violence in a highly direct and confrontational manner. In a few instances, as in the painting of three men in a shower, this violence is only implied, suggesting a deep underlying tension.

This series of five canvases contains a tableau of two soldiers heading a football to each other in a toilet with complete disregard for the figure lying dying in a pool of blood. In another we are shown a scene of a secluded spot by a lake where a girl is masturbating a boy. It is not clear whether she is performing this service willingly or is being forced - her attitude is distant and detached. The next painting presents a dismal, deserted office where three men are sexually abusing two children. Sexual violence also defines the scene in which three young footballers force a teammate to the changing room floor and sodomize him with a Coca Cola bottle. The series is completed by the shower scene described above. These are mainly images in which the protagonists submit to acts in which they casually transgress the boundaries of human dignity. Images that show how one human being can most brutally desire the blood of another brings to mind the expression 'man is a wolf to man'. In this sense, and from the perspective of painting, Ophuis identifies with the questions addressed through the more direct medium of film in Fight Club by the American director David Fincher: 'It is ridiculous to expect art to only present positive images. It is entirely permissible to investigate our shortcomings in art; to behave as if there is nothing wrong is to deny the problem, and I am far more afraid of that than the effects of this film.' (3)

Ophuis's paintings are obtrusive through the casual and careless way he depicts violent acts. At the discussion mentioned above, Henk Oosterling compared his work with a series of paintings by Édouard Manet from 1868/69; three successive variations on the theme of The Execution of Maximillian. Each of the paintings in this series depicts the execution of the Austrian archduke, the Emperor of Mexico. A striking feature of these pictures is the figure of a junior officer who stands to one side inspecting his musket, while his colleagues fire their weapons. It is as if he is untouched by the violence around him. The aloof attitude of this figure makes the execution of this emperor all the more harrowing. According to Oosterling, the impact of Ophuis's paintings are based on the same principles. In his work too, the carefree, indifferent attitude of the perpetrators of the violence contrasts starkly with their gruesome deeds. The figures appear unaffected by their own misconduct, giving rise to an even greater tension in the viewer. Oosterling pointed to the salient absence of this tension in photojournalism, which broadcasts far worse images to the world. Documentary photographs of executions often show the reactions of the onlookers, who always respond with horror. The abjectness of the deed is thus reflected in the faces of the spectators, situating the scene within a moral framework. It is more or less possible for a war photographer to be a neutral reporter who records injustice and communicates it to the world. But in works of art, the acts depicted are attributed to the intentions of the maker. Moreover, if a painter presents the perpetrators of violence as apathetic and disinterested, one is more deeply affected; the impact of violence in a painting is heightened by being wittingly portrayed as an amoral act.

The format, subject matter and the treatment of the picture surface in the five large paintings at Stedelijk Bureau Amsterdam turn them into a unitary cycle. They appear to be the result of a narrowly defined artistic programme. However, a look at the history behind these works reveals them to be the consequence of a process: in a stepbystep development it has gradually become clear to Ophuis in which direction his work should go. A development in which he at first primarily related to his subject matter and medium before, in response to the fierce reactions of the public, he became increasingly fascinated by the complex relation between image and spectator, painting and reality.

Ophuis has always been interested in the question of how painting may be used to construct a narrative structure. His large works from the last few years demonstrate how he has primarily looked to the nineteenth century for references; to the likes of Goya, Géricault, Delacroix, Courbet and Manet (a tradition continued in our century by Picasso, Golub and Richter, with Jeff Wall as the contemporary exponent). It is apparent that aspects of the work of, for example, Géricault and Delacroix have come to be part of Ophuis's art. Firstly in the size and monumentality of the canvases, in which the figures are on a scale almost 1:1 with the viewer. Other parallels are to be found in the way in which he prepares his compositions in preliminary studies. Ophuis works with actors from a casting agency who perform his drawn scenes. He then makes dozens of photograps which provide the starting points for the compositions. However, there are also differences. Where the French masters tried to penetrate and convince through more or less realistic depictions and virtuoso renditions, through dramatic renderings of actions, gestures and facial expressions, Ophuis makes images that are emphatically discontinuous and constructed. In many respects, his paintings are paragons of contradiction. The architectural surroundings in which he situates the violent acts come across as strange and artificial spaces. These are distorted, perspectival sets which the protagonists relate to in a rather wooden manner. At times it seems as if they are in a collage, glued into the picture plane. Contrasting with the violent, expressive scene is the desolate, threadbare way the paint has been applied; against the enormous formats, miniature details - a packet of cigarettes, a plastic cup - leap out, disrupting the pictorial unity. Spectators experience constant friction in their understanding of the picture's surface. Ophuis seems to want to seek the expressive power of his work precisely in these disruptions of pictorial unity. The entire painting is finetuned to exacerbate the sense of unease. In this way, Ophuis makes his subject matter unavoidably and intrusively palpable.

In earlier work, when he was still at art college, Ophuis forged image fragments together into violent compositions of human figures, which he projected against Arcadian landscapes or monochrome backgrounds. Like many nineteenthcentury history painters, he situated his subjects in the past or an indeterminate time - safely at a distance. In his current work the scenes are played out in surroundings that are directly linked to contemporary reality. His figures are stabbed in modern jeans, sportswear and army uniforms. The places where these acts are executed are indisputably contemporary: changing room, shower, office. Ophuis: 'In 1993 I wanted to paint the stories of today, of contemporary reality. I immediately noticed that my art made a much more direct contact with society.' (4)

It is precisely in this area of tension between painting and social reality that Ophuis's art adopts a distinct position. The themes in his work and the confrontational way in which, in terms of painting, he gives these form, provoke so many reactions that it is almost impossible not to take them into account. As became apparent in 1997 when he exhibited the painting Sweet Violence at the Bergkerk in Deventer, his work can provoke such an outcry that a judge has to be called in. Shocking, repulsive, violent, shameless or abject: while Ophuis's images force the viewer to take a position, the reception of his work often ignites an ethical discussion about the admissibility of sexual and violent images. Oosterling belongs to the few who have placed Ophuis's work in a broader context. He has recognized that in the case of this artist, every element in the work serves an artistic strategy, the aim of which is to demand a social role for painting. Precisely by presenting piercing, shocking images through the slow, indirect medium of painting, Ophuis attempts to come as close as possible to reality. It is as a painter that he displays to us the violence of our times. He investigates the moral implications of depicting violence and the discomfort these images induce. But essentially he investigates what meaning painting may have today. For him painting proves its worth when it is able to express emotion and communicate emotional values. The importance of his project lies in the way he tests the power of painting in orde to endow a purely individual experience with social relevance.