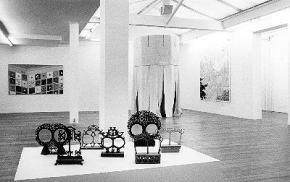 And what if I just happen to want to hear the whole refrain? All over again? Well, then: „Supercalifragilisticexpialidocious”. I am not quite sure – but that is not important anyway. An endless row of syllables which makes it difficult for me to remember the trite succession of letters and be able to simplify them into one common denominator. In the musical Mary Poppins, the clear soprano voice of the nanny demonstrates the simple sequence of eighth notes just like in a children´s song, using practically only a single tone. One tone, one phrase, for all that is imponderable and ambiguous in life. Before I have even had the chance to ask „What?”, the train of interlocked syllables (that do not necessarily make sense) rushes past me.


„Superca...”. Simply taken for granted. The two curators from Cologne leave out the rest of the syllables with a nonchalance as if we all knew the phrase they are referring to. The omission marks „...” in the title lead one to believe that Jörn Bötnagel and Yvonne Quirmbach did not intend to reduce their personal view of the Rhineland art scene down to one common denominator. What sounds so simple constitutes a well-known problem in mathematics: the problem of counting and naming at the same time. For instance, if a train consisting of several cars enters a tunnel, how can one know that the cars coming out of the tunnel are the same ones that entered before? One would have to count them (one, two, three...) and name them at the same time (number 1, number 2, number 3...). In language, one can avoid this problem because the mathematical aporia does not exist. Language names things and also provides terms for circumstances which are not easily named or explained – such as in the title of the exhibition Superca.... That the title does not reveal anything about the content of the exhibition is irrelevant. The phrase has already served its magic purpose: it presents a term, even if that term is incomprehensible. What? And the question which inevitably arises after hearing the refrain is answered by the very same phrase once again when the refrain is repeated. „Supercalifragi...”. Even when heard for the second time it does not make any sense, so that one has no choice but to visit the exhibition in order to solve the mystery.

Instead of programmatically presenting aesthetic activities occurring in the Rhineland, in this exhibition, the curators from Cologne show an open tableau of artistic positions from Cologne and Düsseldorf. The title Superca... is the common denominator of these seven Rhenish artists. Gathered under this poetic banner we do not find a paradigm of the new, the innovative, the hip zeitgeist. No dogma of aesthetic fashions. Superca... is not a curatorial concept which has brought the artists together according to aesthetic parallels and similarities in medium and technique. Instead, it focuses its attention on artistic thought, on that which distinguishes art from everyday life and thus makes it indispensable to us. As a result, this concept frees itself from iconographic readings and the need to name every single aesthetic manifestation. That which the six artistic positions on exhibition share may be quite different for each viewer. But it nonetheless exists. Perhaps this common quality lies in the artists´ economic and efficient attitude towards medium and technique – their special attention to detail which conveys a particular kind of respect for life as such.

The leitmotif of the exhibition can be found in the way in which the curators Jörn Bötnagel and Yvonne Quirmbach maintain their exhibition room in the southern part of Cologne. „BQ” – completely bare, no appendages, no gallery. An obligatory rite of modesty. One is even tempted to say „no space” since the twelve square meters of the room extend more in a sought-after vertical direction than they do in the generally more agreeable horizontal one. Of course the exhibition Superca... reflects the exhibition room BQ´s method of working, just as Martijn van Nieuwenhuyzen´s Hanging Around gave people in Cologne an impression of the Bureau Amsterdam. Despite all the pretentiousness of their own exhibition room, BQ´s method of working is emphatically unpretentious. Working with artists seems to be the most important matter for them – exchanging ideas with people. Thus in Superca..., just as in Rotation, for a short period of time a volatile network is created – a network of people on the move, getting together for exhibitions, meeting across boundaries. Institutional hierarchies stand aside in view of the pragmatism of the curators and artists from the Lower Rhineland. This way of handling matters has always been regarded as typical of the people of Cologne. There are moments when people come together like this when one is able to enjoy such prejudices.

Last year, Jörn Bötnagel and Yvonne Quirmbach opened their exhibition room with a show of Matti Braun and Heike Beyer. Born in Berlin in 1968, Braun works intensely at loosening the hierarchy of aesthetic positions between art and craftsmanship, their limits and values. Matti Braun integrates concrete objects of everyday life in his work, objects whose function is also their beauty. In his work, delight at the representational always comes to the rescue. Its presumed robustness turns out to be an erratic, wandering block which dissolves into stories. Matti Braun´s works are part of a bigger story. He endows them with historical and geographical references and adds them to history. What is most enchanting is the casual discovery that one doesn’t have to create anything new after all; one simply has to put that which already exists – mirrors, chairs, cultural identities – back into the flow of perception at a given point in time. And with that, something like a shift in time occurs. In Matti Braun´s Finnish-German parallel universe – the connection to Scandinavia stemming from his mother – there are many delusions such as these with their colorful facades pointing to the uncontrollable nature of cultural projections and which describe the productivity of misunderstandings. Colorful and transitory, opulent and mortal is the way in which Heike Beyer, born in Siegen in 1967, fills exhibition rooms with her balloon installations and transient slogans. There is hardly anything more convincing than conjuring up massive volume from the contents of a simple plastic bag. It is a pleasure for artists and viewers alike. At first glance, Beyer´s balloon architectures seem to boast the supposed statuary quality of their volume, the space they could occupy. Joined together with clips similar to those used in scientific models of molecular bonds, the balloons, when filled with gas, turn into walls, curves, and bodies in space. A deceptive effect, counteracted by the soft movement of the balloon installations and the unsteady nature of their arrangement and structure. Though in its deflated state it would not neccessarily suggest this, the material used also determines the metaphysical direction of the project: upwards, towards the sky, following the buoyancy of objects. The thin rubber bag defines the relationship between the balloons and their surroundings. It is a surprisingly dynamic one. The air inside the balloons must have the same temperature as their surroundings, otherwise the balloons will loose pressure. Those are quite a lot of truths for one or two balloons. Vincent Tavenne, who was born in Montbéliard in 1961, incorporates economy and efficiency in his work. His tent-like objects consist of canvas stretched over a wooden or metal frame and are easily assembled. They can be just as easily disassembled and folded to the size of a backpack. The narrowness inside one of the tents may seem claustrophobic, but the spatial experience is nothing less than unpleasant. Exits and entrances, a simple step out of the tent (causing the viewer to find himself at a yet unknown part of the exhibition room?) are sufficient in offering Vincent Tavenne an opportunity to manipulate our conception of space and modify its boundaries with a minimum of effort.

When Carsten Höller, born in Brussels in 1961, and Rosemarie Trockel, born in Schwerte in 1952, work together, it is not only for our benefit but also for that of pigs or silverfish. Höller and Trockel’s collaborations with humans and animals – such as in the House for Pigs and Humans at the last Documenta – are behavioral experiments of extraordinary merit. They function so well because the artists depend on a reduced experimental arrangement which is neither a strain on the animals nor on the humans. The way in which the animals are kept and separated from the human viewer is just as natural as the task assigned to them. And, as the human viewer notices after a while, the same naturalness may be found both in the way in which he, the spectator, is kept and in the task assigned to him: watching, observing – the animal kingdom as a white cube. These installations are a delight because the simple encounter between man and animal teaches us something about the way in which we perceive borders and boundaries. In this respect, Höller and Trockel’s works are truly a borderline experience. The mimicry of a natural way of keeping the participating animals is also present in the aesthetics of the Silberfischchenhaus (Silverfish House). It is amazing that in this supposed reduction a broadening for the human viewer truly exists. In the Silberfischchenhaus, Carsten Höller and Rosemarie Trockel present us with a sculpture (the course silverfish follow on the base of an overhead projector from where the shy animals disappear at the slightest disturbance) and an image (the projection of the projector on the wall). When silverfish enter the world of art, it is art that benefits most – from strange unheard-of synergies between animal and man created through the cultural means of art.

The sublime technique of art is called painting. In painting, anything can be expressed, in a manner perfected over centuries. Every painter is part of this tradition – Hendrik Krawen, born in Lübeck in 1963, is no exception to this rule. In large and small formats alike, he develops a pictorial language following his personal truths of perception. The dynamics of the contrast between the monochrome backgrounds of his paintings and their representational elements are rather dry. Facades, interiors, in subdued colors. Dense, matted surfaces confront the viewer with their dominant two-dimensionality. A laconic oeuvre that calls for little comment.

Neither do the many rumors about Michael Krebber need further comment. In the cheeky perfection of his pictures, Krebber has reached an almost Zen-like level. Born in the golden year of 1954, he is the only true son of Cologne among the artists presented. In his artwork, we find traces of the Cologne of the eighties, the Kippenberger years of the Rhineland, but also of the present, of course. This is found in Krebber´s concentration on the gesture, the brushstroke. None of his paintings may be reduced to mere aesthetics because this is not just a part of a single picture on the wall. Krebber´s brushstrokes follow the echo of earlier brushstrokes from the entire history of art. They are functional paintings fulfilling their aesthetic mission in a perfect manner and therefore extraordinarily beautiful paintings. Although he would probably argue that aesthetics and morals have nothing to do with each other, Michael Krebber proves in his painting that beauty is, so to speak, inevitable. This is also the case in this exhibition. Beauty is found in the works of each of the seven artists presented. The name for this is „Superca...”

(Translated from the German by Michael Fuchs, Edited by Louisa Schaefer)