You could say that these artists are well suited to each other. The work of both Charlotte Schleiffert and Michael Tedja is energetic and direct, full of imagination, intelligence and humour. Both work on substantial formats and with collage and both 'zoom-in' on their subjects. These are not grand tableaux but are frequently tightly defined spaces, interiors. And yet they are as different as day and night, not only in how they look - he is dark and she is blond - but because of the entirely different positions they seem to adopt in their work. 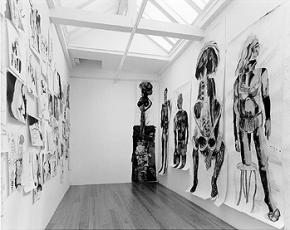 Tedja is blessed with a continuous stream of ideas. This is a sort of jungle which - although the out-side world is not irrelevant - primarily ferments within him. He is not short of subjects, impulses and approaches, nor does he lack the drive to investigate them through different media.

While still at college, he directed his energy towards both fashion design and filmmaking. In 1997, he produced his first CD for an international glass event at Leerdam. The motives behind his work were always highly personal. The strength of Tedja's 'sampling' personality became apparent when he began to make large collages. Nowadays, the floor of his studio is covered in a thick layer of paper - a sort of compost of drawings and fragments of drawings - in which he constantly roots around for new connections and significant associations.

The question is whether there is any point in scratching your head when you have so many layers of reality to survey in all kinds of media. Shouldn't he decide upon one or the other? Is he in fact one artist, he asks himself at times. Or are there five or ten or who knows how many personalities residing within him?

He addressed these existential splits beautifully in Een kort verhaal over abortus (A Short Story about Abortion), a collage made from cut up ink drawings from 1998. A black and white, cut- out, checked structure forms a striking background to the work. Two small figures, a girl and a boy, each hold a head in their hands, offer-ing them up to an animated, angry sort of superego - a woman in a checked apron who, with legs straddled and a frightening, mask-like face, vents her displeasure. On a shelf in her checked domain lies an entire collection of these heads, or 'personalities' as Tedja calls them. The two figures are unmistakably linked to these heads. Their own, originally smaller heads - still visible within the outlines of their giant skulls - have grown upwards to such an extent that they now overlap their brothers and sisters on the shelf.

The grid forms a counterweight to all this turbulence. Let's call it a 'structure'. But, however success ful this image may be, Tedja became embroiled in a fiery conflict with this grid-like structure. It was too rigid, not cohesive enough, too contrived.

Generally speaking, Tedja always wants to escape from the visual languages he develops. Once he has found something, he leaves it behind again. But, this continuous process is by no means like quicksand. The structure grows at the heart of this process, while it is in progress. It is not externally imposed - the checked pattern (the modernist grid) has become an alarming spectre for Tedja - but germinates within him. However, this way of working does lead to the emancipation of the image, to which he attaches great value. For the exhibition in Bureau Amsterdam, he found a solution to these problems in stencils. He placed a series of identical heads - made with stencils - on large sheets of paper in a row alongside each other. Heads from which the same heads sprout into the space above, again and again and again. Just like in his own head. After all, every point leads to more points - a process that is infinite, but which can also be framed.

The images that develop in this way have the same mystical quality as totem poles, a quality that Tedja intensifies through the various green tones and transparent mesh of lines he places over the image. Then, as if with a machete, he banishes another layer to the wilderness and enters into the depths by making incisions and cutting and pasting. The concentration and drama embodied in the heads is intensified through this process. A forest to get lost in? Perhaps. But you never really get lost. The heads - or palm trees and line drawings in other variations - tower one on top of the other, forming a solid foundation, an internal struc ture. This is reassuring amidst all the turbulence. A series of smaller portraits by Tedja are like notes in the margins of these works. He calls them the 'runaway drawings' because the large amount of reworking they undergo literally extends them into space. They have become objects, assemblages in which the green, painted panels they are stuck on form a backbone. These are intense selfrepresentations, or selftorture - all that knife work - through which he questions himself about whether he reflects enough, whether or not he's failing, to what extent he can be conscious of himself or whether the mirror he looks at himself in might not be too small.

Schleiffert would never ask herself these kinds of questions. Self- confident and with enormous pleasure, she paints canvas after canvas, drawing after drawing. That isn't to say that she is unfamiliar with doubt, nor that she is incapable of reflection. Quite the contrary. But she deals with them very differently in her work. She reveals another, darker side of so-called idols and heroes. Pamela Anderson, the busty Baywatch star, is still adorned with voluptuous curls, seductive stockings and high heels in Schleiffert's work, but her suspenders no longer hang from her torso. In the vacuum shines the word FATTY - written by Schleiffert and resembling gnawed fish bones. On top of this is stuck the equally pitilessly tampered with head, as if death itself - in the idea of the 'vamp' - is sneering at you.

'Illness' is certainly one of Schleiffert's themes, but it is peppered with humour in her work and is frequently bizarre. Where the woman no longer has a body in this work, in another drawing a woman's body hangs as if in an abattoir. Hung on butcher's hooks that have been forced through her nipples, the word SPORT is painted in cheerful yellow at stomach height. And there's no head. No head - while Tedja collects them by the dozen. The other main difference between them is that Scheiffert has concentrated exclusively on painting since she was at art school. What is striking is that her paintings have become increasingly cheerful over the last few years. Particularly since she spent a period in Spain where she allowed yellow to enter her work. Brilliant yellow, flaming red, neon pink, royal blue, bright green, gold, silver and glitter - it can rarely be too colourful or varied, flying in the face of all notions of good taste. Although she does use black - which appears a lot in Tedja's work - she usually only uses it for the bizarre, shady side of 'beauty' or to enhance the sparkling qualities of her colours. Oil, acrylic, conté, pencil - Schleiffert uses everything at once if necessary, whether its a painting or a drawing. Her drawings are often built up around a grotesque figure in the middel of the sheet, while the surrounding space is left empty. The paper then works literally as the background. However, in her paintings she pays a lot of attention to the composition from one edge to the other. Even the negative or leftover forms are transformed back into positives. The figurative pretext for the work is transformed into abstraction through the intense reworking of the painting's surface. This gives rise to beautiful, organic interweavings of the bodies of the human figures and the 'body' of the painting itself.

Her compositions are often extremely balanced with a cluster, or a gravitational point at the centre. Other compositions are more open, more dispersed, twisted, as if the 'illness' has infected the paintings too. As if it has literally been elevated to become something that stands out - call it beauty if you will. If we compare this with what Tedja achieves in his green paintings/drawings, in which he manages to sublimate his self-imposed obstacles into an image or, in his words, an 'emancipation'.

The sadomasochistic and pornographic actions that occur in Schleiffert's work can come across as harsh and violent. But if you really allow yourself to comprehend these images, you will discover that all this violent sex simply provides a pretext for examining something else. 'My paintings are about love, emotions, violence, passivity, power, exhibitionism, shyness, jealousy - feelings everybody is familiar with. I paint people or 'being human', she says.(1) Regardless of all the theatrical ado about painting, Schleiffert brilliantly exposes human nakedness, vulnerability, desire and powerlessness.

Both Tedja and Schleiffert are concerned with the intensity of experience and the sublimation of personal or human questions into autonomous images, which can also provide comfort for all anxiety, doubt and misery.

There's one painting that should not go unmentioned. When I saw it at Schleiffert's studio I liked it immediately, while Schleiffert thought was almost too beautiful and would therefore probably not exhibit it in Bureau Amsterdam. She referred to it as 'The Renaissance', because the colours and composition were reminiscent of Renaissance painting.

In this painting a woman, apparently standing, lifts her left, sensual, red-stockinged leg to allow a dark man free access to her crotch. Her head is concealed under a red hood with a checked pattern on the front, like a fencer's mask. Part of her body is covered by another checked pattern, undulating and fluid, which on closer inspection reveals itself as the man's shirt.

Not only do checks - with a nod to Tedja - emerge as capable of being fluid, hot-blooded, emancipating and secretive, the term Renaissance also set me thinking. The work of both Schleiffert and Tedja is about rebirth. Incessant rebirth. This leads me to think about Petrarch, harbinger of the Renaissance, who never considered his texts to be finished and constantly reworked them. And there are his unforgettable reflections on the importance of being en route (rather than having reached the top), reflections on the frequently arduous processes and inner conflicts that accompany this, and reflections on the beauty arising from it - of which he was the living proof. (2) And he wasn't alone.