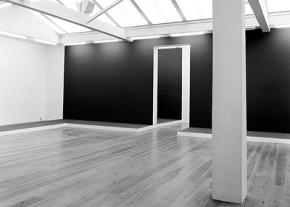 On Krijn, Gladstone and Myself

I. Desire for the big screen

There is a sense of loneliness in the work of both Gladstone Thompson and Krijn de Koning. An extremely subtle creative driving force is the carrier for a highly contemplative arranged experience. Their art gives the slight impression that it would rather free itself of all human intervention, preferring to move in the realm of abstract processes. In some ways it is as if the work wants to deny that it is trace left by human intervention and acts. It is as if the final experience results from a mechanical rather than a personal arena. Though it is true that, in the details, one can find sufficient aspects that refer to the working process, the overall impression is one of distance. Krijn’s and Gladstone’s work contains an element of expectation, something illusive and hallucinatory, an art that above all wants to remain lowkey. ‘Aristocratic’ work means nothing to them. Theirs is a game of visibility and concealment, openness and elitism, of not immediately laying all your cards on the table. They have the prearranged intention of sustaining the tension. They work in silence, a relative silence, a pregnant silence. A silence that also takes on a conceptual relevance in the surface of a wall that is full of signs and wounds, full of structureless architectural connotations. This is an art that wants to be both visible and invisible. I can’t always cope with the silence. I start to smuggle all kinds of tangential connections with the other media into their installations. Perhaps this is also because I do not always feel completely comfortable in the elitist language of art. If, on the other hand, they comment that their art is not media art, not a carrier for something else, I am inclined to do precisely that. By way of provocation, I remark that their work sometimes has the quality of a screen onto which you can project many associations. Without the projection screen there can be no film, it supports the filmic illusion. Yet without the film, the projection screen remains relatively innocent and insignificant. But I did manage to seduce them into a conversation about cinema. About love and lust in relation to architecture in Pasolini’s ‘1001 Nights’ Krijn’s favourite film. Or about the magical touch of Gladstone’s favourite director Eric Rohmer, who, now in his seventies, is still able to move his actors to achieve things (gestures, movements, mental constructions) never seen before. But it would be stretching the point in his eyes to project images of such genius onto their constructions. They show me a photograph of an earlier installation without an audience. Are they afraid of the public? No. And the best proof of this is Krijn’s recently completed, permanent installation for the museum De Wieger in Deurne which has created an utterly public atmosphere. A place that provides a podium for the museum’s official public activities, but which also offers more private surroundings to the accidental visitor. It is therefore left to us, the spectators and visitors to Gladstone’s and Krijn’s installations, to provide the work with a mental environment. When I saw them they hadn’t yet decided what they were going to do in Bureau Amsterdam. Krijn was uneasy about this, but Gladstone reassured him that there was no need to worry: ‘We’ll come up with something’.


II An introduction: Krijn and Gladstone

I have seen lot of Krijn de Koning’s work. The first piece I saw by him was a sort of wooden barrier in Rik Gadella’s mini-gallery in Staalstraat, Amsterdam, behind which the gallery owner hid. Later I saw a kind of coloured, cube-like composition on which the visitors to the gallery left their glasses at Picaron Editions on Binnenkant, Amsterdam. I kept removing the glasses and asked Krijn whether he objected to the guests’ behaviour: ‘You don’t put your glass on top of the Donald Judds in the Stedelijk’. I don’t think he thought this comment was particularly relevant. Another time I saw work by him in the run-down, patchedup pavilions from Documenta 9 that stood languishing in the wind in Almere. Krijn had made a clever internal and external construction that wonderfully subverted Robberrecht’s architecture. I also know a few stories about Krijn when he was living in Paris when he became friends with Daniel Buren, looked up to Ponthus Hulten and where he got to know the often ghastly mechanisms of the art world. And we should not forget his presentations in HCAK in The Hague for which we made a marvellous catalogue full of drawings and computer humbug. I used his fantastic, highly individual architectural sketches which he made in Africa as an excuse to show off my recently acquired knowledge of codification. I have forgotten to mention that I also saw work by him in the Centraal Museum in Utrecht. The same place - in the country house Oud Amelisweerd - where we were once again under the possessed guidance of Rik Gadella and where we cultivated a new future during a sort of artistic work-week. But I missed Krijn’s major exhibition in Witte de With, Rotterdam. I don’t know Gladstone Thompson: a true Londoner, very smart and who, like Krijn, went to De Ateliers. Gladstone understands my amazement at his surname, the background to which I only later begin to suspect. Born in London, his family comes from Jamaica from where he has just returned. I find him beautiful and aristocratic: him personally and his work, at least as far as I can see from photographs and slides. But Gladstone doesn’t like the notion of aristocracy because it suggests an activity that is separated from everyday life, and is therefore a barrier. What they will finally show in Bureau Amsterdam, I’ve no idea. They once cooked-up an installation in a gallery in Brussels from which only a panoramic photograph from the cover of an otherwise empty graphics portfolio remains. It looked wonderful: the artists positioned a construction that ran across an atrium, offering views from above and below. It was reminiscent of Gordon Matta Clark and old, stripped, timbered houses. Likewise, in Gladstone’s work, it is clear that his interventions in the architecture are more than accidental additions or subtractions. He applies a certain sense of invisible alienation which casts a strong shadow across the space in which he installs it.

III All right then: a metaphor machine

In Louis Mackay’s ‘Peregrinations of the World’, the poetic metaphor is the driving force behind art and science. This metaphor is, after all, ‘the highest achievable point in the reconciliation of time and eternity, faith and reason, philosophy and science’ (Kees Fens). Don’ t Krijn and Gladstone know that the desire for the metaphor can steer and stimulate thought in all directions? In any case, my best experiences are precisely those where I read the work slightly differently to the way the artist intended. Art that can be read in a different way every time, art that forces you to be constantly alert as it were. The best art is that which, like a metaphor machine, constantly hands you new possibilities for interpretation. Or conversely, that which in all forms allows itself to be steered in all directions by the reader or viewer, constantly increasing both the transparency and the secret. True art is therefore unable to resist the dream of the metaphor. I now see that I should have asked Gladstone for his opinion on another London artist, Salman Rushdie, whose writings lie open to all forms of interpretation, becoming both clearer and hazier as a result. It is therefore not surprising that the dogmatic ayatollahs were unable to accept his Satanic Verses. So much paradoxical integrity is almost too much to bear: only a soul inspired by God and the Devil can come up with such a thing. Are Krijn de Koning and Gladstone Thompson aiming for the exact opposite of this? Wouldn’t they rather suppress this kind of metaphorical journey? Do they know what they are missing? Or do they, by curbing their imagination, want to stimulate the viewer?