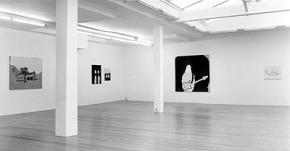 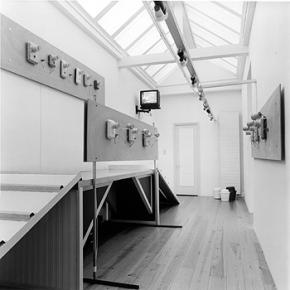 "When you are young, you have an antenna for knowing what is important for the time and this turns out to be your style. I want to make work which is relevant to now, but I hope it won't become old fashioned in two years time, I hope it survives a number of years."

Michael Raedecker's approach to painting is to give traditional subject matter a new twist by using methods and procedures of picture making not usually associated with image based painting. Interiors and exteriors reminiscent of a more classic tradition are created from yarn and poured paint. This collage establishes for the viewer, from a few scant details, a striking graphic which resonances strongly within our collective recognition making a painting, suggestive of a disquieting and disturbed world. Using a palette of muted colours in close tonal relationships, empty hotel rooms and modern 'dream houses', he turns a romantic view of the past, into a would-be still from a chilling scene of the crime reportage from documentary television.

Raedecker found yarn from an earlier career in the fashion industry. He uses it to sketch on the canvas a few necessary details, a straight line here, or a scribble there, using thread like a pencil or a brush. These paintings, in the freedom with which they mix paint and yarn, avoid craft connotations as well as any already heard feminist discussion of female craft skills. They delight in the joy of material contradictions. Paint is applied to show its versatility, making images and covering areas up; the work emerges as much from an intuitive approach to making, as it does from careful planning. Pours and spills in paint whirl and pool, allowing one colour to be infected with another. Hovering between a known result of procedure and technique and the uncertainty of what the mass of a spill or pour will actually look like as it settles, allows a degree of chance.

Keeping his eyes on what has happened on the London scene, Raedecker is relaxed enough to invent a new use for certain paint techniques associated with young British painters, Ian Davenport's sculptural masses of poured paint, Gary Hume's flatly painted coloured areas of glossy paint and Chris Ofili's use of a decorative surface, are sampled and remixed, to suit an altogether different purpose.

"I like to look at paintings where you are asked to come and discover their details at different distances." Raedecker has an intimist's skill. He unites this with the power of a strong graphic image. "Some of my paintings are quite empty. There is hardly anything happening, with just a little paint and little thread I can concentrate on the details, to make small areas specific, the lamps in a room or a fern plant in it's blue pot. The balance between the yarn and the level of detail is very important. If all of the painting was made in this way, it would look kitschy. Sometimes I am on the edge kitsch. I don't want to go over that edge."

A dialogue with paintings from the past as well as the present is also apparent. The view from a room to a garden was triggered from a renaissance painting. "I look at American art. I like early Pop Art- the hand painted Pop of Lichtenstein before it became mechanical." Raedecker is happy taking an international approach to rework some classic themes of Dutch painting, views from in and around the home, but changing their purity, adding the aura of t.v. culture so the images become associated with an American nostalgia for it's past. "American culture has slipped into European culture and we copy a lot of things from American culture. It is pushed at us."

Raedecker enjoys the idealisation of squeeky clean family life presented through t.v. shows from the 1960's, like 'The Brady Bunch', reversing their promise of happiness, re-visiting idealised 1960's happy homes but seeing them now as potential sights for projecting a more gloomy and sinister side of the dream. "I am dealing with popular collective images and people have stories of their own to fill in the painting. In a film you need a music score to orchestrate a dangerous or mysterious scene, to make it more horrifying, I set my paintings up similar to a music score. I've given one frame, one scene and I've asked the viewer to fill it in."

If the images are reminiscent of America, the mood is distinctly European low key and sombre with a reference to the poverty and simplicity of materials. Luc Tuymans and Marlene Dumas are influences on the work's tensely charged atmosphere. Raedecker is keen to suggest some crime behind the clean facade with titles like 'Behind the Scene' and 'The Getaway', which allude to film culture without being specific provoking speculation that something awful has occured. "My paintings are silent and reflective, pointing in a direction without giving everything away. I would like people to discover the paintings by themselves. I don't want to be the dictator of what people see."