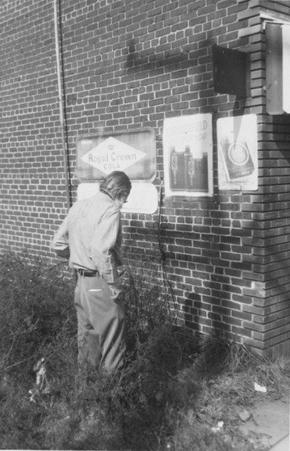 Walker Evans and the Barn

The exhibition ‘Walker Evans and the Barn’ shows work by five contemporary artists in relation to that of a number of established names. The show is based on a number of aspects of the later work of the American photographer Walker Evans, which is present as the anchor for the presentation.

In the last years of his life Walker Evans (1903-1975) began to photograph with a pocket-size Polaroid camera, preferring that over the large format camera with which he had previously worked and had used to produce his famous photographs. The innovative SX-70 Polaroid camera fit perfectly with Evans’ search for a succinct but at the same time poetic vision of the world; for the 70-year-old photographer pictures that developed themselves immediately and came out of the camera exhibition-ready were what scissors and paper had been for the older Matisse.


During his ‘field work’ Evans increasingly often photographed casual objects, with the emphasis on weathered advertising signs and notices. Later he also began to collect such objects in his studio, so as to then mount one-off exhibitions of them together with his photographs. After his death the contents of his studio and a large number of the later photos ended up in the collection of the Metropolitan Museum of Art.

There is a story that Evans once discovered a barn full of old signs and objects. He supposedly bought all of the contents as a lot and reinstalled them along a friend's driveway. The story tends to support the idea that Evans’ work is not simply to be categorised as documentary photography: he used the camera as a medium for ‘discovering’ as well as ‘making’.

‘Walker Evans and the Barn’ takes this ethos as its point of departure. It contemplates a number of fundamental aesthetic questions from the perspective of artists who all deal with concrete, non-fictional subjects, incorporating these into their work, so that it is not clear where the process of discovery stops and where making work begins, in which individual experience almost coincides with its representation.

In the exhibition such systematic work by the five contemporary artists, coming from The Netherlands, Germany and the US, is anchored not only in photographs and Polaroids by Walker Evans, but also in a series of photographs being shown by the composer and conceptual artist Henry Flynt, who in the late 1970s tried to systematically document graffiti by the collective SAMO©, which included Jean-Michel Basquiat. Flynt saw these graffiti as a new sort of expression that made fun of the commercial element in both mainstream and underground culture.

In addition the 1980 video film Shopping Bag Spirits and Freeway Fetishes: Reflections On Ritual Space is being screened. This film by Barbara McCullough is a personal interrogation that the artist and filmmaker performed on the relation of art to ritual. Among other things, the film shows how David Hammons creates an artwork on the street. Finally, a third ‘classic’ component of the exhibition consists of documentation of an exhibition and book by Gabriel Orozco, From Green Glass To Airplane, produced by the Stedelijk Museum in 1997 and 2001, respectively.

The contribution to the exhibition by Keith Stern-Pirlot consists of a work that will be produced on site just before or during the opening. The work by Wolfgang Breuer will be found both in the exhibition and outside it, in the city, with the precise location indicated in SMBA.

‘Walker Evans and the Barn’ was assembled by the artist Jeremiah Day, who lived and worked in Los Angeles before coming to The Netherlands in 2003 for a residency at the Rijksakademie voor Beeldende Kunsten.

The free SMBA Newsletter (NL/EN) is appearing to accompany the exhibition, with a text by Jeremiah Day on the various works in his show. Magazine Metropolis M will publish an essay by Day at the occasion of his exhibition in their December issue.

Closed on 25 December and 1 January