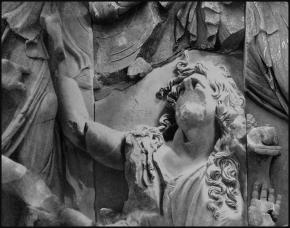 From: July 26th till September 6th

The 19th century myth of national identity is experiencing an important resurgence in the West and certainly in The Netherlands, which is wrestling with the introduction and deployment of a national historical canon and the founding of a National Historical Museum. But what a nation state embodies in symbolism and collective identity generally also has a negative version for those who stand outside it. The works in the exhibition One's History is Another's Misery focus attention on specific histories and events that are part of national identities and which have this reverse side, positive or negative, integral to them. The artists involved work from a documentary oriented, investigative attitude in which analytic images, lifted out of the flow of events, have a particular dramatic effect. At the same time, complying with Salman Rushdie's motto, "If history creates complexities, let us not try to simplify them," they often add an extra layer on top of the enormously complex and ambivalent histories that they lay bare.

Leo Asemota, originally from Nigeria, shows drawings, collages and a recording of the 2008 performance The longMarch of Displacement. In these he reflects on the role that the British empire played in the former kingdom of Benin (now Nigeria), and specifically on the relation between the celebrations surrounding Queen Victoria's Diamond Jubilee in London in 1897 and the punitive British expedition that was simultaneously taking place in Benin. From this perspective a plaque marking Victoria?s 60 years on the throne, at the foot of St. Paul?s Cathedral, comes to be seen in the light of the violent extinction of that once so famous African kingdom.

Another piece about the appropriation of 'foreign' cultural heritage is Monument to Another Man's Fatherland, by Lonnie van Brummelen and Siebren de Haan, from 2008. The Pergamon altar, now in the museum of the same name in Berlin, is central to this two-part work. Using a filmic reconstruction from photographic reproductions of this Hellenistic structure, Van Brummelen / De Haan trace its history since its arrival in Berlin from Turkey a century ago, and how it played a visual role in all sorts of photography fashions under various regimes. The 16 mm film Revolt of the Giants recited by prospective Germans shows screen tests by young Turks who want to immigrate to Germany and are preparing for their German residence examination at the Goethe Institute in Istanbul. In an idiosyncratic way of speaking German they describe the various battle scenes from the altar, but presently there does not appear to be any nationalistic projection on this heritage 'stolen' from them. Nevertheless, the artists where not allowed to film the altar itself because of fears about Turkish demands for its repatriation.


The contribution by Gert Jan Kocken consists of a number of photoworks that manifest important turning points in history, often by means of a single monumental image. The work Judenporzellan was made specially for the Berlin edition of One's History. It involves two photographs of porcelain monkeys, one of which is asserted to have been in the possession of the 18th century German-Jewish philosopher Moses Mendelssohn. In compliance with a Prussian law which only applied to Jews, he was forced to purchase it (along with 19 other similar monkeys) from the Royal Porcelain Factory in order to obtain civil rights. Recently this charged and shameful episode from German history, embodied in the statue of the monkey, was further complicated, as is revealed by the second photograph and a book that is also part of the work.

The installation O TANNENBAUM by Sarah Ortmeyer is a witty slice of 'German' collective identity as this is somewhat crudely preserved in the Christmas celebrations of their army on missions outside NATO territory. One component of the work is a charmingly painted wooden Christmas tree that German troops, dispatched to Somalia in 1993, had made there. Ortmeyer draws a connection to the Christmas trees that were dropped by the Luftwaffe to the German soldiers trapped at Stalingrad around Christmas, 1942 in the absence of any more effective relief.

The Krakersmonument (Squatter's Memorial) by Jeremiah Day, recently unveiled in the Western Harbours of Amsterdam, is also a part of the exhibition, together with several works on paper that are related to it. The (temporary) monument touches on current political developments in the Netherlands surrounding the phenomenon of squatting. For one person squatting is a typically Dutch expression of tolerance, a legitimate resistance movement against unbridled capitalism; for others it has become a perfidious symbol of the evils of the Dutch culture of tolerance which, even now that there has in fact not been an extensive squatter movement in the Netherlands for years, must be retroactively criminalised with as its apotheosis the recent forced withdrawal of a member of the lower house of parliament because of his activities in the squatters' movement in the 1980s. But squatting in fact also had positive consequences, certainly in Amsterdam, where it lives on in policies regarding community cultural 'breeding grounds'. With his Krakersmonument, an experimental sound sculpture, Day argues for keeping room open for cultural and political discussion space which it appears will be definitively lost with the upcoming laws against squatting.

On the day of the opening, Saturday, 25 July, before the opening it will be possible to visit Jeremiah Day's Krakersmonument in the Westhaven by bus. Departure at 3:00 p.m. from SMBA. Reservations at mail@smba.nl

One's History is Another's Misery was originally conceived and assembled for the Autocenter art space in Berlin, where it was seen in a somewhat different configuration from 12 June through 12 July, 2009.