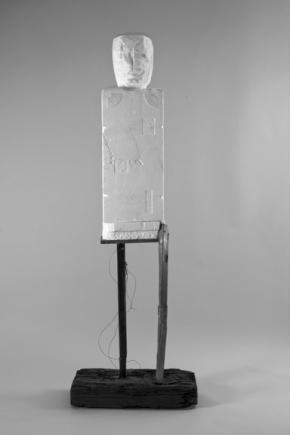 This summer Stedelijk Museum Bureau Amsterdam presents the group exhibition ‘In-between Things’. The exhibition title refers to some of the characteristics shared by the works on display, mostly sculptures, which combine various materials and practices. Moreover, these works share an interest in intercultural relations and their political imprints. Broadly speaking, ‘In-between Things’ addresses the theme of globalization and its relation to contemporary art.

Although economic aspects of globalization in relation to contemporary art have recently been much discussed (and criticized), they are not central to ‘In-between Things’. Rather, this exhibition focuses on the effects of globalization on contemporary artistic practices and their theoretical frameworks. The mixing of different cultures is often linked to the term hybridity. In general, the term hybridity describes the mixing of heterogeneous materials, organisms and practices. Since the emergence of post-colonial discourse, however, the term hybridity has lost its political innocence. 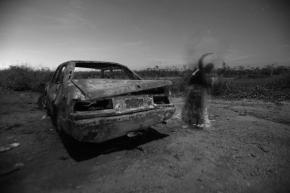 All the works in ‘In-between Things’ engage in intercultural relations, each in its very particular way. Huma Bhabha (b. Pakistan, 1962) appropriates the formal language of ancient art, a language that comes across as archaic. At the same time, however, the works appear very contemporary due to the artist's use of modern materials. The works of Daniel Spoerri (b. Romania, 1930) question yesteryear's myths, while at the same time the artist establishes a connection between these myths and art historical knowledge production; moreover, Spoerri relates this production to political power structures. The exhibition also includes a work by Clemens von Wedemeyer (b. Germany, 1974), with which he intervenes in discussions about the authenticity of anthropological knowledge. Papa Adama (b. Burkina Faso, 1980) counters the stigmatizing view on the ‘typical’ African appropriation of discarded materials. In this sense, Adama deals with the meaning of materials in a way that is similar to what Jimmie Durham (b. US, 1940) did with ‘typical’ Indian objects. ‘In-between Things’ includes a work by Durham which is exemplary for his artistic practice in the 1980s. The photographs of George Osodi (b. Nigeria, 1974) mix aspects of traditional African culture with modernist artifacts by means of ingenious camera handling.

An important question emerging from the exhibition is whether a timeless, pure culture that is per se related to a designated location can exist at all. The works of the artists presented in ‘In-between Things’ answer this question in the negative. A newsletter will be published in connection with the exhibition, which will include an essay exploring the term hybridity in relation to the works on display.

SMBA Newsletter nr. 116 (NL/EN), with an essay written by Kerstin Winking, curator of ‘In-between Things’, is appearing to accompany the exhibition in Stedelijk Museum Bureau Amsterdam.